Freda Harvey, the mother of Vanderbilt freshman Jayden McGowan, listened intently to the Vanderbilt football staff as they told her and her son how highly they thought of the under-the-radar prospect out of South Carolina. But Harvey and McGowan were also told that the program just didn’t have a full scholarship available for the speedy wide receiver.

That scholarship could become available over time, Vanderbilt said, but it couldn’t make any honest promises.

“She just smiled and said, ‘Y’all will figure it out,’ ” recalled Barton Simmons, Vandy’s general manager and director of personnel. “It was zero concerns, zero worries. She knew.”

One year later McGowan has emerged as one of Vanderbilt’s top weapons on offense. He has already earned an SEC Freshman of the Week honor and goes into his fourth career game, a 2:30 p.m. matchup at Northern Illinois on Saturday, second among Commodores in all-purpose yards.

Not bad for a kid from Laurens, South Carolina, many overlooked and underevaluated.

“I like the fact that they kind of overlooked me and that I ended up coming here,” McGowan said. “I didn’t have 40 schools to choose from. That just makes me want to go ever harder.”

McGowan began playing football at the age of 6 with teammates and a year and two years older than his self. He didn’t grasp the concept that he may be better than his peers until middle school when his older brother Darius Harvey, who played at Presbyterian College at the time, would return home to teach him the finer points of the game, how to run routes as a wide receiver and read opposing defenses.

The speedy McGowan also joined the track and field team with the sole purpose of breaking all the record times his older brother had set years earlier.

At Laurens District 55 High School, McGowan became a star on the field on Friday nights and on the track. He made 38 receptions for 817 yards and hauled in nine touchdowns as a senior while racking up early 600 yards on kick returns. McGowan ran the 100-meters in 10.6 seconds and 200m in 21.6 seconds – state title numbers in both events.

Still, tucked away in the small, northwest South Carolina town and being part of a high school football team that had zero to little recruiting activity for the senior class ahead of him, McGowan was swimming in recruiting obscurity ahead of his senior season in 2021.

“I would be on Twitter every day and I had this whole thing with my height and my weight and my GPA, my 40 time and my film attached,” McGowan said. “I probably sent that out like 3,000 times. It was every day.”

Laurens 55 High School offensive coordinator Lee Taylor did his part, too, by emailing as many Division I programs as he could with McGowan’s film, information and accolades. McGowan estimates maybe 20-25 percent of the programs he reached to responded – but the percentage of programs who followed up with McGowan or were serious about his future dropped drastically from there.

Even when McGowan impressed Vanderbilt with an on-campus workout, all the program could really do at that point was suggest a gray shirt scholarship offer. That would entail McGowan enrolling as a traditional student at Vandy, but in no way being a part of the football program his first year out of high school.

McGowan, still, took to social media to announce that he had been offered a scholarship from Vanderbilt University. The congratulations poured in while McGowan knew the announcement didn’t tell the whole truth, he said. His father, Howard McGowan, bragged to anyone around town who would listen about his son’s offer to play football at the prestigious SEC program.

Meanwhile, McGowan’s mom had already finalized details for her son to take the next official recruiting visit to Harvard.

That visit never happened. In the always-changing world of recruiting, Vandy had a scholarship spot suddenly become available.

“When I got the call (with the official full-ride scholarship offer from Vanderbilt) I was standing right beside her,” McGowan said, “and she was just smiling and I’m like, ‘How did she know?’ ”

McGowan had already made his mind up he would enroll early wherever he decided to play college football. With a 4.0 GPA in high school and with a state championship in track, he said he felt he had accomplished all he could in his prep career.

He also knew the academic rigors of Vanderbilt would take some adjustment. And always his own harshest critic when it comes to academics, McGowan said he has never settled for subpar grades so wanted to make sure he had a solid footing on campus before the 2022 season rolled around.

McGowan also wanted to get acclimated to the Commodores’ offensive playbook. He did enough work there to become one of Vandy’s spring practice standouts after arriving in Nashville in January. 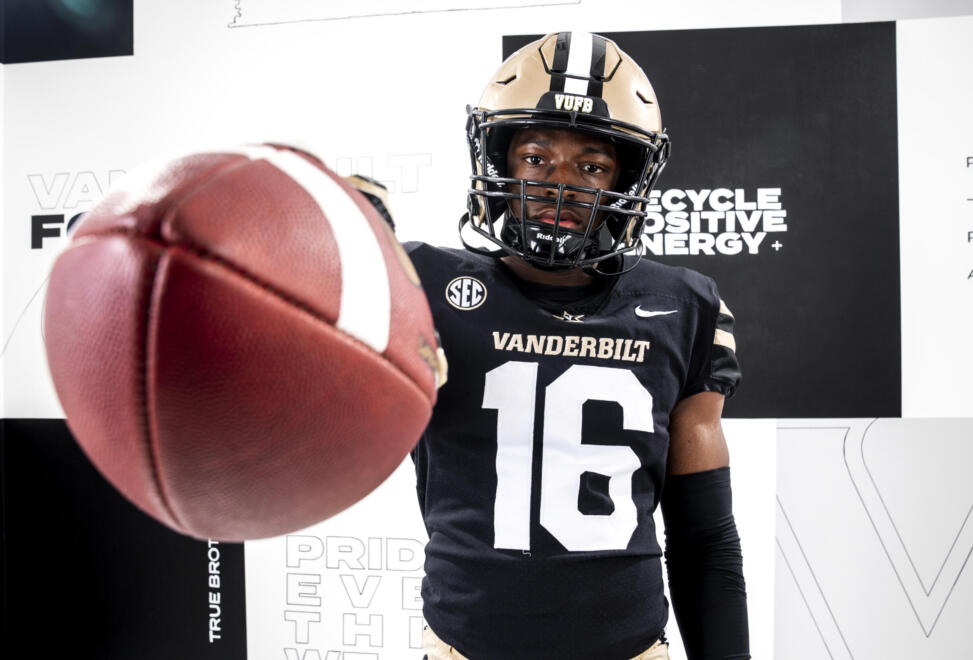 “It’s hard for early enrollee freshmen to make the transition and to deal with the volume that comes with college football. It’s a lot. For that kid not to hit a wall, really he has been consistent from the start. It’s impressive,” Vanderbilt head coach Clark Lea said in April. “That’s a testament to him. It’s a testament to his family, his high school, kind of what makes him unique. We’re excited about him. We think he can obviously be a play-maker for us.

“I think now he gets to kind of really process everything he has learned and compact it and build into a great fall camp. He has got to keep learning and growing because it’s still a small sample size. So we need to keep pushing them to every day get a little bit better. But we’re pleased with where he is and think he can be a factor in our offense in the fall.”

And what a factor he has been.

In his collegiate debut at Hawai’i, McGowan had five catches for 27 yards and three carries for 29 yards. The following week against Elon the 5-foot-8, 177-pound wide receiver caught a 75-yard touchdown pass as part of a 118-yard receiving day.

McGowan was named SEC Freshman of the Week days later.

“I feel like I’ve done a decent job but there’s still room to improve,” McGowan said of the start to his collegiate career. “I’m making a lot of little mistakes and taking plays off and I have to fix that with effort. Like when I got in the game Saturday against Wake Forest I was seeing looks that I hadn’t seen before. Film study is going to have be a bigger priority.”

Nicknamed “Shake” for his ability to shake defenders, McGowan ironically used to be called “Butterfingers” during youth football because he had problems catching passes. He has come a long way since then and said he’s now focused getting a Vanderbilt degree – likely with a medicine, health and society major – and helping the Commodores reach their highest potential.

Those two goals now seem awfully likely for a football player not many programs wanted.