NASHVILLE, Tenn. — As the Vanderbilt football team prepares to cross the threshold of two weeks to go until the start of the regular season, it will hold another scrimmage Saturday at Vanderbilt Stadium to further evaluate where it stands.

The Commodores begin the 2020 campaign Sept. 26 at No. 13 Texas A&M and after the team’s defense rose to the challenge in the preseason’s first scrimmage, head coach Derek Mason hopes his offense steps up Saturday.

“These guys have to take the field and just be able to do their jobs. I’m not looking for anything spectacular – I’m looking for consistency,” he said. “Whether we’re talking about how we move the ball on the ground, how we’re able to move the ball downfield, blocking on the perimeter – it needs to look like football.

“We got to manufacture first downs, we got to be able to have a run game, but also put points on the board. That’s what this thing is about.”

Mason said Saturday’s scrimmage will be geared around situational football. The practice will also include referees to make sure the Commodores are polished when it comes to alignments, penalties and clock management.

“All these things are part of the pieces that we got to be able to put together to make a full picture of what this team’s going to be in 2020,” Mason said. “We’re just going to keep staying with the plan that we have. It’s process-driven. (Saturday) is just one more opportunity for these guys to show us exactly where they are.”

Advanced look at the Aggies

Long before the Commodores officially knew they would be traveling to College Station, Texas, to begin the 2020 season, Mason and his staff had opened the book on Texas A&M to see what coach Jimbo Fisher’s team may be all about.

Mason said he began scouting Texas A&M in May long before Vandy’s schedule was set in stone in early August. Since then even more time has been committed to preparing for the 13th-ranked team in the nation.

“You start to dive into exactly who they are whether it’s personnel, guys coming back, strengths, positions of concern, what do they have to replace, who are they on special teams, what do they look like in situational ball,” Mason said. “These are all the things that we’ve spent our time on.”

Texas A&M is coming off an 8-5 season and 24-21 win over Oklahoma State in the Texas Bowl. The Aggies return a senior quarterback in Kellen Mond and their leading rusher and wide receiver from a season ago and have eight starters back on the defensive side of the ball.

When the Vanderbilt football program has had to pause team activities recently to guard against potential COVID-19 outbreaks, it used that time for extra study on a team many think could be a serious player for an SEC championship.

“We’ve spent a little bit more time detailing what we need to know so that when we present it to our student-athletes it’s paired-down information,” Mason said. “It’s more impactful, especially for some of these guys who are in these second or third groups who may have to play.

“That’s what we’ve been doing with Texas A&M for the last month.”

One of Vanderbilt’s strengths this season should be on defense where 11 starters from 2019 are back.

For that reason, Mason’s depth chart on that side will be more about creating a two-deep of primary defenders rather than traditional starters and backups.

“We try break these guys up so much not that we have 1s and 2s, but I’d rather call them goons and goblins,” Mason said. “That’s just the idea of having a two-deep of experienced guys who know how to communicate because if you don’t communicate it’s a fast way to get yourself beat.”

Vandy should be strongest most notably in the defensive backfield where the positions of both safety and cornerback have a well of experience. The defensive line includes three seniors who will be complimented by proven youth and eager transfers. 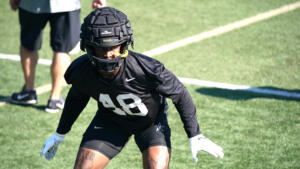 “Having guys that communicate, that understand not only the scheme, but what the offense is giving you, is important so you can play ahead of the play,” Mason said. “That’s what we’re working on right now. We have a little more experience on defense coming back. These guys have been around football – front to back I think we got some guys that can communicate, who understand how to play football.”