NASHVILLE, Tenn. — In the past 20 years, only two true freshmen in the Southeastern Conference have started at quarterback for their team’s respective season-opener.

“It’s a huge honor for me and it’s something that I’ve worked for for a while to accomplish,” Seals said Friday. “It’s exciting.”

Seals and his Vanderbilt teammates open the 2020 season Saturday at No. 10 Texas A&M. All eyes will be on the 19-year-old native of Texas in his debut as a Commodore during a return to his home state. 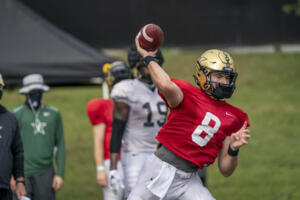 “I credit the other guys in the quarterback room for us all helping each other, learning the offense – because we’re all new guys – and pushing each other, making it a competition,” Seals said. “I’m glad coach is trusting in me in this and I’m going to make sure I do everything I can to make sure that trust is put in the right hands.”

On April 3, 2019, Seals verbally committed to play football for Vanderbilt. From there he led his Weatherford High School (Texas) team to a 7-4 record and first state playoff appearance in 12 seasons.

Seals totaled more than 6,400 all-purpose yards and accounted or 65 touchdowns his final two seasons for Weatherford. He was a Mr. Texas Football semifinalist in 2019.

“Mature, understands the game pretty well for his experience level,” Vanderbilt offensive coordinator Todd Fitch said. “Has a pretty even-keeled mind, doesn’t get too up and doesn’t get too down and has a really good arm – arm talent is really good with him.

“His overall feel of what’s going on in the offense, where all the moving parts are going are really good for his age and his experience level. And when you chart him he’s throwing the ball pretty accurately and I think those two things stick out the most to us.”

Seals enrolled at Vanderbilt in January – along with Moussa – and was the lone scholarship quarterback taking reps during spring practice while Moussa recovered from an injury. But that spring practice was cut short due to the COVID-19 pandemic and Seals found himself adjusting to life as a Commodore through a virtual and online world before returning this summer.

He admitted that making the transition to taking courses online, preparing for a season that may or may not happen, coming to practice not knowing who would be available due to positive COVID-19 tests and quarantine protocols has made the preseason difficult at times. But Seals continued to impress his teammates with his ability to adjust and learn on the fly while directing Fitch’s new-look offense. 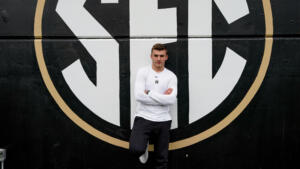 “(Seals) came in here early, he hit the ground running, he did a great job hopping in and navigating his way through Vanderbilt with not that many other freshmen peers with him,” Vanderbilt center Grant Miller said. “So navigating things on his own, figuring out class, being at meetings, seeing where he fits in in this offense – he did a great job with that.”

Vanderbilt, beginning a 10-game, SEC-only schedule in 2020, has only had two true freshmen start at quarterbacks since 2000 – Wade Freebeck (2014) and Kyle Shurmur (2015). Neither of those student-athletes made their respective debuts in the season’s opening game.

Shurmur holds the program record for passing yards in a game by a true freshman with 209 at Tennessee in 2015.

For Seals, however, he’s not concerned with his numbers or his individual accolades or even the all the pressure of starting his first college game in the SEC. He’s only worried about one thing.

“I recognize the opportunity to build up some experience and really take this thing far,” he said. “I’m seeing all of this as more experience that I can get and eventually leading this team to where we’re in competition for an SEC championship. I think that’s the direction all of my teammates see us going in the future.