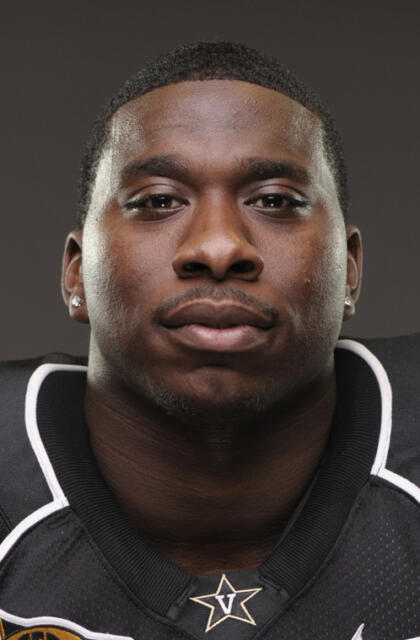 2012
Stacy started every game at running back for the Commodores, putting the finishing touches on the most decorated career ever by a Vanderbilt running back… Ended the season with 1,141 yards and 10 TDs on 207 carries, earning unanimous Second Team All-SEC honors… His 1,141-yard rushing total ranked third in the SEC and made him the first Commodore to ever rush for at least 1,000 yards in back-to-back seasons… He holds the team career record with 3,143 rushing yards and 30 rushing touchdowns… Ran for more than 100 yards in four different contests as a senior, including a season-high 180 yards in a blowout victory at Wake Forest… Capped remarkable season by earning MVP honors in Music City Bowl, rushing for 107 yards and a TD in win over North Carolina State… Effort at Wake Forest included a rush of 90 yards, breaking his own school record for the longest run in team history… Registered 169 yards on 27 carries and a touchdown in a win over Auburn… Caught 10 passes for 205 yards out of the backfield… Had a career-high 86 yards receiving vs. Tennessee on a career-long 72-yard reception… Has 1,361 all-purpose yards in 2012… Matched a career high with 29 carries in team[apos]s critical win at Missouri, and sealed the game with a superb third-down carry in the closing minutes… Made postseason appearance in East-West Shrine Game and was lone Vanderbilt player invited to participate in the NFL Scouting Combine.

2011
Stacy earned team[apos]s postseason Most Valuable Offensive Player Award… Broke Vanderbilt[apos]s single-season record with 1,193 rushing yards, breaking former mark set 20 years earlier by Corey Harris, who ran for 1,103 yards in 1991… Also broke team single-season record with 14 rushing touchdowns… Finished the year as SEC[apos]s third-leading rusher, earning second team All-SEC RB recognition from coaches and sportswriters…Became just fourth Commodore to rush for more than 1,000 yards in a season, and first since Jermaine Johnson in 1995 (1,072 yds.)… Carried the ball 201 times (most since Jermaine Johnson had 267 rushes in 1995)… Averaged 5.9 yards per rush… Ranks eighth all-time among [apos]Dores for career rushing yards (2,002 yards)… Averaged 91.8 rushing yards per game, with 117 yard-per-game avg. at home… Rushing TD total ties Allama Matthews (TE, 1982) for most scores by individual player in a season… Scored 84 points to rank tied for 2nd all-time for single-season scoring (with Matthews) behind Jack Jenkins (90 pts., 1941)… Caught 20 passes for 106 yards… Rushed for three TDs on three occasions – vs. Army, vs. Kentucky and at Wake Forest… Second 100+yard game of his career came against Ole Miss (11 carries for 169 yards, including a 77-yard TD)… Rushed for 97 and a TD against Georgia… Completed the first pass of his career, connecting with WR Jordan Matthews on a 43-yard TD… Completed 2-of-5 pass attempts on the season… Career-high 198 rushing yards against Army with three TDs, including a 55-yard score… Against Arkansas, scored on 62-yard TD as part of 128-yard effort… Season-high 28 carries against Kentucky and again at Wake Forest… Named the SEC Offensive Player of the Week for 135-yard, three-score performance against the Wildcats on Senior Day… Ran for 184 yards at Wake to break team single-season record… Scored in seven of team[apos]s final eight games.

2010
Stacy continued as a productive offensive force for the Commodores until his season ended prematurely with injury… Earned starts vs. SEC foes LSU, Georgia and Florida while playing in team[apos]s first nine games… Also participated as punt returner… Finished year as team[apos]s second leading rusher (331 yards)… Also had nine receptions for 32 yards… Earned team[apos]s Offensive Player of the Week honor in opener after rushing for 69 yards, including a 33-yard TD in the fourth quarter… That performance came after a knee sprain occurred in preseason camp… Named Offensive Player of the Week for second time after rushing for 90 yards in win over Eastern Michigan… Contributed to win at Ole Miss with 46 rushing yards, including a TD from 35 yards that gave Vanderbilt its first score… That effort included a career-long 67-yard scoring jaunt… Head injury in first half of Florida game forced Stacy out of uniform for the final three games.

2009
One of seven true freshmen to participate for Commodores… Formed superb freshman rushing duo with Warren Norman… Earned four starting assignments as tailback and played in 10 games, missing Ole Miss and South Carolina games with lingering ankle injury that also limited production against Mississippi State and Rice… Finished season as team[apos]s second leading rusher behind Norman with 478 yards and three touchdowns on 107 carries… Also caught seven passes for 72 yards as target out of the backfield… Started season with 133 rushing yards and touchdown in win over Western Carolina… That rushing total was most by Commodore during campaign… Rushed for 83 yards and pair of touchdowns against Georgia Tech… One score against Tech went for 62 yards, the longest rush by Commodore on the season… Also had 47-yard reception against Ramblin[apos] Wreck… Finished year returning punts at Tennessee, gaining 38 yards on three returns, including a long of 19 yards.