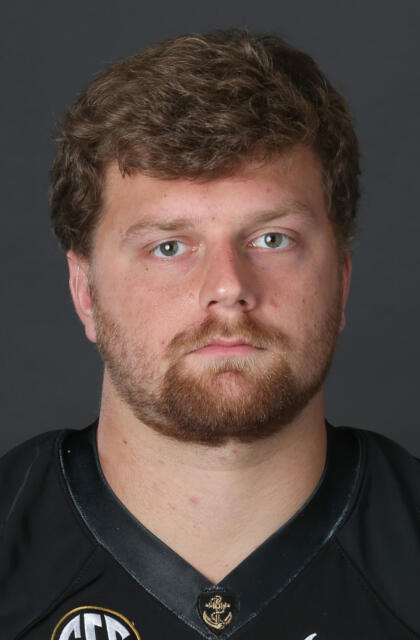 2013
Named postseason First Team All-SEC OL by coaches and Second Team All-SEC OT by Associated Press writers… Also received All-SEC accolades from Phil Steele and Athlons… Regarded as one of the SEC[apos]s most versatile linemen, Johnson finished the season by making his 51st consecutive start against Houston in the BBVA Compass Bowl… It marks the most career starts in Vanderbilt football history and ranks as the longest active games started streak in the SEC… Garnered SEC Jacobs Blocking Trophy consideration… Credited with 61 knockdown blocks and 27 intimidation blocks during the season… Voted offensive co-captain by his teammates, Johnson started every game at left tackle… Played nearly every Vanderbilt offensive snap as a senior… Named SEC Offensive Lineman of the Week for a team-record fourth occasion after effort in victory over nationally ranked Georgia that included four blocks that led directly to Vanderbilt TDs… Has allowed just two sacks in last two years while protecting blindside of quarterback… For his career, has 198 knockdown blocks, 54 intimidation blocks and 172 blocks that led directly to Commodore TDs or first downs.

2012
An offensive co-captain, Johnson has started all 13 games on the offensive line during his redshirt junior campaign… One of the top lineman in the Southeastern Conference, Johnson earned All-SEC honorable mention from an Associated Press panel of writers…. Helped pave the way for a rushing attack that averaged 166 yards per game and a passing attack that averaged 214 yards per game… He was recognized as the SEC Offensive Lineman of the Week for his performance in shutout win at Kentucky, in which Johnson and the offensive line paved the way for 227 yards on the ground and 220 yards through the air… Johnson[apos]s SEC honor was his third weekly award from the league, the most ever by a Vanderbilt offensive lineman… The Commodores produced a season-best 29 first downs and converted 11-of-17 third down conversions in the win against the Wildcats.

2011
Johnson earned postseason Anchor Award as team[apos]s Offensive Lineman of the Year… Started started at center, guard and tackle as a redshirt sophomore… Ability to play every position was crucial to team[apos]s success culminating in AutoZone Liberty Bowl appearance… Johnson started seven games at center, four at left tackle, and two at left guard… Played virtually every offensive snap for the Commodores for a second consecutive season… Opened the season as starter at center, moving to guard and tackle for much of season until closing the campaign back at center… A key member of the offensive turnaround that had the Commodores scoring 10 points more points per game than previous year… Captured SEC Offensive Lineman of the Week honors for second time in Commodore career for his performance in a victory over Ole Miss when the Commodores rushed for 281 yards… Helped pave the way for junior running back Zac Stacy to set single season school records with 1,193 rushing yards and 14 rushing touchdowns.

2010
Undersized as a first-year starter, Johnson put together a solid at left tackle, earning conference and national recognition… One of two linemen to start every game for Commodores… Earned SEC All-Freshman OL honors by postseason ballot of head coaches and several football publications… Named All-SEC freshman and second-team Freshman All-America by Phil Steele[apos]s Magazine… Consistently graded among the top performers on Commodore line, despite being outweighed by virtually every opposing DE… Named SEC[apos]s Offensive Player of the Week and team[apos]s similar recognition after excellent blocking performance in Commodores[apos] win at Ole Miss.

2009
Despite redshirting during first year of campus, Johnson impressed coaches and teammates with this athleticism as an offensive line prospect… Showed coaches the ability to play all three positions on the offensive line… Named team[apos]s postseason Offensive Scout of the Year award, and also was singled out for his practice contributions after LSU game… Dedicated in weight room, Johnson added 15 pounds of bulk during first year.