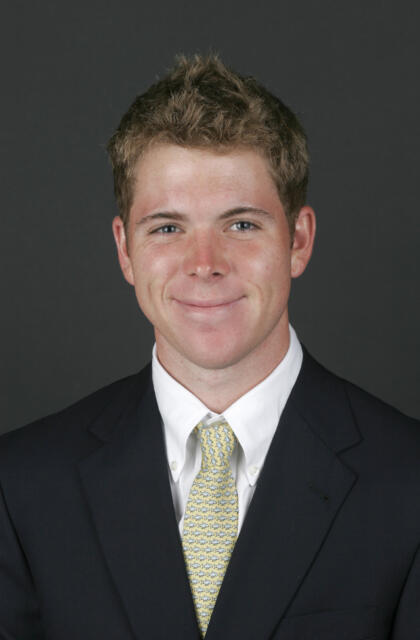 2005-2006 Season
One of only three golfers to earn First-Team All-Southeastern Conference for the second straight year in 2006 and was the only Commodore to compete in the NCAA East Regionals… Featured on the Ben Hogan Award[apos]s prestigious watch list… Named to the 2006 Southeastern Conference Good Works Team… Shot a seven-under 65 in the final round of the 2005 Mason Rudolph Intercollegiate to defeat teammate Jon Curran for medalist honors… Tied for third at the Isleworth Collegiate Invitational… Posted nine top-20 finishes for the 2005-06 season, including at the Carpet Capital Collegiate… Won back-to-back amateur events, earning medalist honors after leading November[apos]s College All-American from wire-to-wire before besting a field of 106 golfers at the 80th Annual New Year[apos]s Invitational… Tied for eighth in team[apos]s first Spring event, the Seminole Intercollegiate… Closed the 2006 regular season with a pair of top-10 finishes — fourth at the Hootie at Bulls Bay and third at the Courtyard by Marriott Intercollegiate… Earned a top-20 finish at April[apos]s SEC Championships for the third time in his collegiate career.

2003-2004 Season
Runner-up in the 2004 United States Amateur…became Vanderbilt[apos]s first freshman All-America when he was named to the third-team…was first team All-SEC…one of five players named to the national All-Freshman honor squad…eight Top 10 finishes during the season included a tie for third at the Seminole Intercollegiate and fourth-place finishes at the Country Club of Louisiana and the Hyatt/Dorado Beach Invitational…five times shot under par in tournaments and established a new school record with a blistering 63 at the Hyatt/Dorado Beach event…finished out of the Top 12 only three times the entire year.

Amateur
Competed in the 2003 U.S. Open, posting scores of 75-74 over the first two days of competition…Tied for 10th at the 2003 Dogwood Invitational…Semi-finalist at U.S. Public Links Amateur Championship, losing to eventual champion and Vanderbilt alumnus Brandt Snedeker…Finished third at the North-South Amateur with scores of 65-69…Tied for 40th at the Western Amateur, posting scores of 75-70-73-72…Participated in the 2003 U.S. Amateur.

Personal
Born January 14, 1985…Son of Mark and Bonny List…Has two sisters, Bekah, age 18, and Sarah, age 14…Both parents were All-American swimmers at UNC-Chapel Hill…Majoring in Human and Organizational Development…Chose Vanderbilt over Auburn, UNC, Georgia, Georgia Tech, and Wake Forest…Chose to become a Commodore because of Coach Press McPhaul, the city of Nashville, and felt it was ‘just the right fit.’