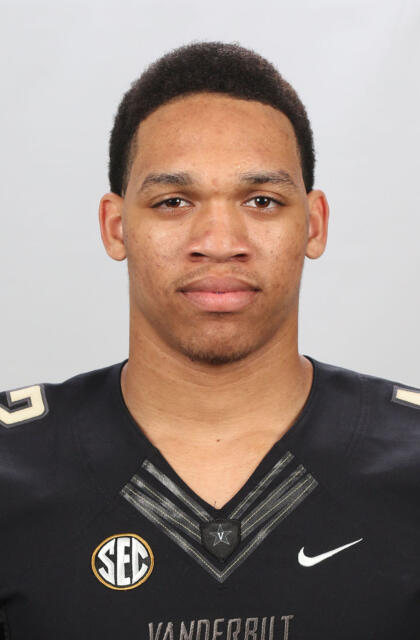 2017
Wiley enjoyed his finest season as a Commodore, ranking among team and SEC leaders in two defensive categories… Earned starting assignments at safety in all 12 games… Finished the year with a team-leading 88 total tackles and 58 solo tackles… Also contributed a tackle for loss, an interception and forced fumble, and five defensed passes… Solo tackle total tanked No. 6 in the SEC… Produced the most tackles by a Commodore defensive back since Kenny Ladler’s 90-tackle total in 2013… Remarkably consistent through the season, registering at least four tackles in 11 of 12 games… Posted double-digit tackle totals against four opponents, topped by 14-tackle effort against Alabama… Earned Bednarik Award National Defensive Player of the Week honors for his stellar performance in win over nationally ranked Kansas State – 11 tackles, a game-sealing interception and two defensed passes… Notched season high with nine solo tackles at Ole Miss… Also contributed 11 stops at Florida… Had seven tackles and a forced fumble against Kentucky.

2016
Wiley was a seven-game starter at safety who played in all 13 contests, Wiley became one of the Commodores’ most productive defenders… Concluded the season second to linebacker Zach Cunningham with 50 solo tackles and 76 total tackles… Also contributed 2.5 tackles for loss, two forced fumbles, two fumble recoveries, and four defensed passes… Registered at least three tackles in 12 games, topped by a 10-tackle performance at Florida… Had a tackle for loss and seven stops in Vanderbilt’s win at Georgia, and seven solo tackles in the finale against Tennessee… Contributed forced fumbles against Tennessee State and Auburn, and recoveries versus Middle Tennessee and Missouri.

2015
Wiley participated in every game as a two-year player, contributing at cornerback, nickel back and on coverage units… Concluded the season with eight total tackles, one tackle for loss and a fumble recovery… Set career best with three solo tackles at Florida… Registered first fumble recovery in win over Missouri.

2014
Wiley saw limited action during an early-season games, but was forced to sidelines for much of the season by injury… Played limited snaps in defensive secondary against Ole Miss prior to being sidelined… Do not register any defensive stats during playing time.