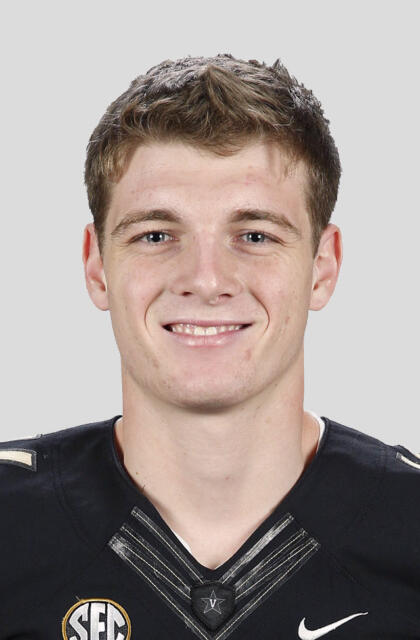 2018
Shurmur put together one of the finest seasons every by a Commodore quarterback in his fourth and final season as the team’s starting quarterback… In doing so, he also became Vanderbilt’s all-time leader in virtually every passing category… As a senior, he completed 62.6% of passes as a 13-game starter season (254-of-406) for 3,130 yards and 24 touchdowns… Passing yardage, completion percentage and total completions this year represent single-season career highs… In SEC-only game, Shurmur threw 15 touchdowns, second most in the league and just three interceptions, second fewest in the league… Concluded his Vanderbilt career with the following marks: 64 touchdown passes, 8,865 passing yards, 723 pass completions and 1,273 pass attempts… Finished regular season in superb fashion, earning SEC Offensive Player of the Week honors Nov. 24 after completing 31-of-35 for 367 yards and three touchdowns to lead Vanderbilt’s win over Tennessee… Shurmur’s 88.6 percent completion percentage broke his own school record… He became first Vanderbilt quarterback to register three wins over Tennessee since the 1920s… In last four regular-season appearances, all against SEC teams, Shurmur was sensational: 90-of-123 (73%) for 11 touchdowns and one interception… Had at least three touchdowns in last three games: at Missouri, vs. Ole Miss and vs. Tennessee… Besides the Tennessee effort, Shurmur earned accolades from the Reese’s Senior Bowl for his 326-yard passing effort at Notre Dame on Sept. 15… Finished career by leading Commodores into their second bowl appearance in three years, throwing for 286 yards and a touchdown against Baylor in the Texas Bowl… Played in the postseason NFLPA Collegiate Bowl from the Rose Bowl in mid-January.

2017
Shurmur produced one of the top seasons ever by a Commodore signal caller in his third year guiding the offense… The junior started every game, running his consecutive starts streak to 28 games… Finished the regular season completing 220-of-380 passes (57.9 percent) for 2,823 yards, 26 touchdowns and just 10 interceptions… Shurmur’s touchdown total established a new single-season team record, breaking Whit Taylor’s former record of 22 touchdowns set in 1982… Shurmur’s passing yardage total ranks as the third highest single-season total in team history… Missouri’s Drew Lock was the only Southeastern Conference quarterback to throw for more yards and touchdowns… Opened the season hitting 20-of-28 passes for 296 yards and three touchdowns in victory at Middle Tennessee, then passed for four touchdowns against Alabama A&M… Threw for three touchdowns at Florida… In last five games of the season, averaged 292.5 yards and threw 12 touchdowns… Threw for more than 333 yards and four scores at South Carolina, 308 yards and a score at Kentucky and 348 yards and a score… In season finale, earned helped Commodores to a road victory at Tennessee by throwing for 283 yards and four scores.

2016
Shurmur put together one of the most productive seasons ever by a Commodore quarterback… Showing progress with each game, Shurmur was one of the SEC’s top quarterbacks in the final weeks of the season… Starting all 13 games, Shurmur finished the regular season completing 204 of 375 passes (54.4 percent) for 2,409 yards and nine touchdowns… He also did an excellent job limiting turnovers, throwing an interception every 47 passes… His 2,409 passing yards broke the Commodore sophomore passing record previously set by Jay Cutler in 2003 total… Shurmur was superb in the last month of the regular season, combining to complete 79 of 129 passes (61.2%) for 1,162 yards and five touchdowns against SEC foes Auburn, Missouri, Ole Miss and Tennessee… In the win over Tennessee, Shurmur set a career high with 416 passing yards, the fifth highest single-game total in team history… He also threw for 273 yards against Ole Miss and 251 yards at Missouri… Shurmur’s campaign also included leading last-minute comeback wins at Western Kentucky and Georgia… Completed 19 of 46 passes for 158 yards against NC State in the Camping World Independence Bowl.

2015
Shurmur ended his true freshman as the Commodores starting quarterback… Shurmur played and started in five games, making his initial Commodore appearance in October against Missouri… Shurmur guided the squad to victories over Missouri and Kentucky in his first two starts against SEC teams… Finished the year completing 44-of-103 passes for 503 yards and five touchdowns… Was a combined 23-of-46 for 255 yards, two TD passes and no interceptions against Missouri and Kentucky… In season finale at Tennessee, set personal highs with 15 completions, 209 passing yards and three touchdowns.

PERSONAL
Kyle Patrick Shurmur… Born Nov. 6, 1996… Son of Pat and Jennifer Shurmur… Has three sisters: Allyson, Erica and Claire… Dad serves as head coach of the New York Giants and is the former offensive coordinator with Minnesota and Philadelphia… Dad played football and mom swam at Michigan State… Working toward a degree in economics… Represented teammates at 2017 and 2018 SEC Media Days.