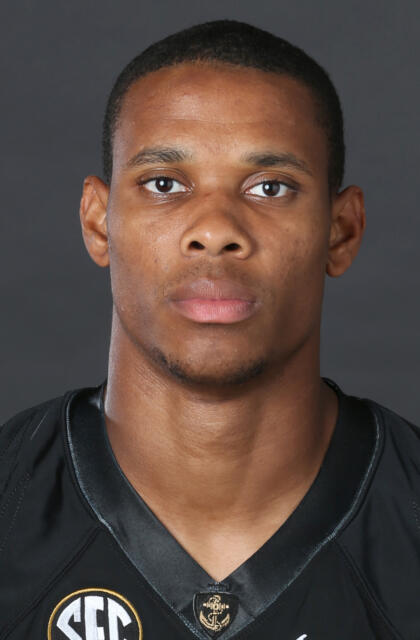 2013
Produced one of the most productive receiving seasons in Southeastern Conference and Vanderbilt history … Concluded career as the most prolific receiver in SEC history … Named First Team All-America WR by USA Today and Athlon as a senior … Also earned All-America honors from The Associated Press, SI.com and CBSSports.com and consensus First Team All-SEC recognition from coaches and writers for second straight year … Holds virtually every Vanderbilt career and single-season receiving mark … Ended career as the SEC’s all-time leader with 262 career receptions and 3,759 receiving yards … As a senior, the Biletnikoff Award semifinalist established a new SEC record with 112 catches … His receiving yardage total of 1,477 yards is the third highest total ever by an SEC receiver … Also registered seven TDs, including a pair against Houston in 41-24 BBVA Compass Bowl victory … His career total of 24 TD catches is a school record and ranks T-14 in the SEC … He also set a new SEC record by surpassing 100 receiving yards in nine games … Had at least five receptions in every game … Amassed 74 catches and 904 receiving yards vs. SEC competition … Opened the year with a gutsy performance vs. Ole Miss – 10 catches, 178 yards and 1 TD – that included a remarkable, over-the-shoulder catch that helped the Dores to a late lead … Posted 8-catch, 123-yard effort vs. Missouri, then caught 11 passes in win over nationally ranked Georgia … Closed the season in superb fashion, totaling 36 receptions and 399 receiving yards in wins over Kentucky (12 catches, 141 yards), Tennessee (13 catches, 133 yards) and Wake Forest (11 catches, 125 yards) … Capped a regular season of incredible catches by hauling in a deep pass in heavy traffic on 4th-and-12 to keep eventual game-winning drive alive vs. Wake Forest … In bowl game, had five catches for 143 yards and 2 TDs, all coming in the first half.

2011
Matthews emerged to lead the team in catches and receiving yards … Became one of SEC’s most productive receivers during second half of season … After posting just five catches for 63 yards and no TDs through first five games, Matthews caught fire down the stretch reeling in 36 passes for 715 yards and five TDs … Finished year with 41 catches, good for 783 yards (most by Vandy WR since Earl Bennett in 2007 and five TDs … Ranked among SEC leaders with 19.1-yard receiving avg … Enjoyed a three-game stretch against Arkansas, Florida and Kentucky that saw him go over 100 yards with a TD in each game … His 151 yards against the Razorbacks made him the first Commodore WR to have over 100 yards receiving since John Cole in 2010 … Matthews followed up with a career-high 171 yards against the Gators, the most by a Vandy WR since Earl Bennett’s 223 against Richmond in 2007 … He also became the first Commodore to post back-to-back 100-yard receiving games since Bennett in 2006 … Matthews’ nine receptions vs. Florida matched Jonathan Krause’s team season-high and established a new career mark for Matthews … His 131-yard game against Kentucky made him the first Vanderbilt player to record three straight 100-yard receiving games since Dan Stricker in 2000 … Had team-high four catches for 56 yards vs. Cincinnati in AutoZone Liberty Bowl.

2010
One of four true freshmen receivers on preseason roster, Matthews worked his way into the starting lineup by season’s end, proving himself as a top aerial target for Commodore QBs … Saw action in every game at WR, though playing time increased substantially by end of year … Started in finale vs. Wake Forest … Concluded year with team’s fourth leading receiver (15 catches), good for 184 yards and four TDs, which topped the receiving corps … Registered a TD catch in each of last four games … Named team’s Offensive Player of the Week after five-reception effort vs. Tennessee … Concluded year with seven-catch, 74-yard effort vs. Wake Forest.

High School
Senior captain … Three-year starter at WR, helping Mustangs to 3A state playoff quarterfinal appearance in 2009 … As senior MVP, had 61 catches for 1,061 yards and 13 TDs as WR and eight INTs and 50 tackles as DB … Also posted four return TDs … Named first team 3A All-State WR by sportswriters and All Elite 11 by Huntsville Times … As junior, had 68 receptions for 1,357 yards and 14 TDs … Ended prep career with 181 receptions, 3,218 receiving yards and 38 TD catches … Standout in basketball, helping school to state title in 2007 and runnerup finish in 2008-09 … National Honor Society member.