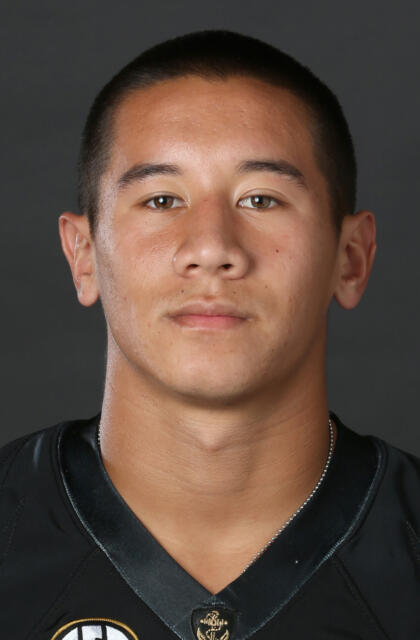 2013
Spear enjoyed another superb season as Vanderbilt[apos]s primary placekicker… One of only three players in team history named as three-time team captain… As a senior, recognized during halftime of the Sugar Bowl as one of 11 finalists for Wuerffel Award… Also became first Vanderbilt player ever included on Allstate-American Football Coaches Association Good Works squad… Set school single-season scoring record as senior by totaling 99 points… Made 15-of-19 field goals, including conversions from 54 yards at South Carolina and 50 yards vs. UAB… Contributed two field goals and a TD-saving kick return tackle in 41-24 victory over Houston in BBVA Compass Bowl… Capped regular season by kicking 38-yard FG in closing seconds to clinch comeback win over Wake Forest… The three-FG performance against Wake Forest earned Spear SEC co-Special Teams Player of the Week honors… 54-yarder at South Carolina was career long and tied for third longest in team history… Greatly improved his distance on kickoffs – 46 of 66 kicks resulted in touchbacks… Also contributed three tackles on kickoff coverage.

2012
Spear is in the midst of putting together the finest season ever by a Vanderbilt placekicker… Has connected on 20-of-24 field goal attempts, good for 83.3 percent, tops in the SEC among kickers with at least 12 attempts… His 20 made field goals sets a new single-season team record… He also was a perfect 27-for-27 on extra points, while handling a majority of the kickoff duties… Made 11 of his 12 field goal attempts, including five beyond 40 yards… Also was perfect inside 43 yards on the season, hitting 14-of-14 field goals… Kicked a career-long 52 yard field goal in regular season finale victory at Wake Forest to become the first Commodore to kick a 50-plus yard field goal since Bryant Hahnfeldt in 2006… Then added a 50-yard field goal later in the Wake game to give him the Vanderbilt single-season scoring record for a kicker with 81 points… Twice named as a SEC Special Teams Player of the Week… Had a total of 63 kickoffs for 3,847 yards (61.1 average per kick) and 22 touchbacks… Also known for his big hits on kickoff returns, as he has tallied three tackles on the season… One bruising tackle on coverage during win over Tennessee earned ESPN Top Ten Play status.

2011
Spear was [apos]Dores[apos] placekicker duties for first eight games and served as kickoff specialist throughout the season… Regular season foes averaged only 18.5 yards per return against Vandy[apos]s kickoff team with a long return of just 35 yards… Kicked off 64 times witht ten touchbacks… The exuberant kicker made 11 special teams tackles, including nine solo stops, many of which were spectacular collisions… Hit 4-of-7 field goal attempts and 26-27 extra points to rank third on team with 38 points… Made first three field goals before missing a pair at Alabama… Season-long 37-yard field goal made against Army. 14 rushing touchdowns.

2010
One of 13 true freshmen to see action, Spear served as the team[apos]s primary kickoff specialist for the season…Nearly 40 percent of Spear[apos]s kicks were not returned by opposing teams… Spear[apos]s ability to kick high and deep limited opposing returners to a 20.7-yard average… Also credited with a pair of coverage tackles.