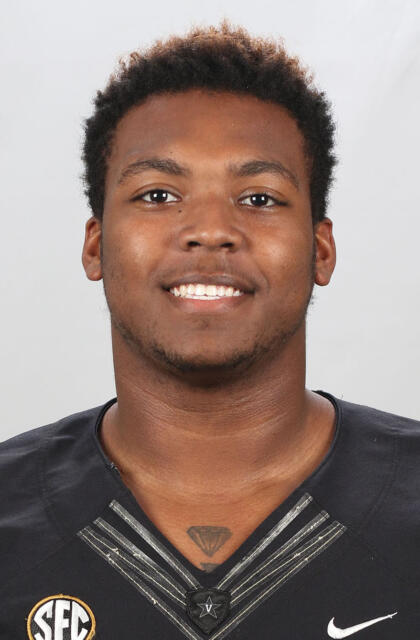 2016
In his final season, Butler enjoyed arguably his finest year as a Commodore… Formed an outstanding interior duo with junior Nifae Lealao… The fifth-year senior started all 13 games on the defensive front, contributing at both tackle and end… He concluded the season with 31 total tackles, 18 solo stops, 7.5 tackles for loss and a team-high four quarterback sacks… Butler was consistent through the season, registering at least one tackle in every game… All of Butler’s sacks – and six of his tackles for loss – came against SEC competition… His individual performances were topped by a two-sack effort against Florida and 1.5 sacks in the season finale win over Tennessee… In the Camping World Independence Bowl, Butler matched career highs with seven total tackles and three solo tackles.

2015
Butler continued to play an important role in the Commodore interior defense for the third straight year… Played in 11 games, earning starts at defensive tackle in first eight games… Finished the season with 12 solo tackles among 18 total tackles… Set new single-season high with three quarterback sacks, and matched another with seven tackles for loss… Sacks came against Ole Miss, South Carolina and Missouri… Had two tackles for loss against both Austin Peay and Ole Miss.

2014
Butler developed into one of the Commodores’ top defensive linemen as a redshirt sophomore… Played in all 12 games, earning nine starts at defensive end… Has started 14 games during first two seasons as contributor… Established new single-season career highs with 35 total tackles, 2.5 quarterback sacks, 7.5 tackles for loss and three defensed passes… Consistent performer who registered at least one tackle in every game… Posted QB sacks in SEC play against South Carolina and Tennessee… Season-high tackle total of five stops came at Missouri… Also had at least four tackles against Ole Miss, UMass, South Carolina, Florida and Mississippi State… Posted second career block of extra point or field goal at Georgia… Notched first career touchdown by recovering a fumble by UMass in the end zone.

2013
Butler developed into a key playmaker in the interior of the Vanderbilt defensive line as the season developed… Showed steady improvement and lots of energy through the season… Earned a start in opener vs. Ole Miss after switching from offensive guard/center to defensive tackle during spring drills… Made 13 appearances during the season, earning starts against UMass, UAB, Missouri, Tennessee and Houston in the BBVA Compass Bowl… Finished with 25 total tackles, including 16 solo stops and six tackles for loss… Added a forced fumble and fumble recovery, along with two defensed passes and a QB hurry… Was superb in win over Kentucky, contributing two tackles for loss and two defensed passes along with a huge play on special teams when his block of a Wildcat PAT attempt resulted in two points for the Commodores… Set career highs with three solo tackles and six total tackles – and added a forced fumble and fumble recovery – in victory at UMass… Tied career high with six tackles at South Carolina… Had two tackles for loss in victory over UAB.

2012
Butler has not played during his true freshman season, but has remained on the team’s depth chart throughout the year as a center-guard candidate… Brings physical maturity and mobility to the squad’s offensive line corps.

Personal
Adam Oneal Butler… Working toward an undergraduate degree in Earth and Environmental Sciences… Son of Clarence and Kim Butler… Dad is manager at Staples; mom is group nursing & facility administrator… Has one brother, Josiah, and one sister, Kim… Descendant of Texas children’s rights campaigner Edna Gladney, subject of 1940s film “Blossoms in the Dust”… Enjoys fishing and singing.