Sophomore running back steps into starter's role for the Commodores

NASHVILLE, Tenn. — As the story goes, while William Griffin Jr. was still in his mother’s womb, his eldest sister Jasmine was watching the popular cartoon Rocko’s Modern Life. She suggested to her mother that her soon-to-be born baby brother be named Rocko.

Nineteen years later that nickname is how everyone knows the Vanderbilt running back. And sooner rather than later the SEC will know his name as well.

Rocko Griffin is penciled in to start for Vanderbilt in Saturday’s game against visiting No. 2 Georgia. Fresh off a 107-yard performance against Stanford, and coupled with a season-ending injury to junior Re’Mahn Davis, the sophomore’s time to be the Commodores’ featured back is now.

“I don’t feel like there’s any pressure,” he said this week. “For myself, what I do is I tell myself, ‘You’re a starter. Just wait for your opportunity to play.’ Naturally people would like to put pressure on you, but at the end of the day you train so you can start, you train so you can play the game.

“I’m just going to do what’s best for the team and give it my all every day in practice and continue to be somebody that they can lean on and be reliable.”

Griffin entered Saturday’s contest against Stanford and nearly scored his first career touchdown on a five-yard run from the 6 – but he was ruled down before the goal line. Runs of 34 and 36 yards, respectively, later in the game helped Griffin eclipse the 100-yard mark for the first time in his young career. 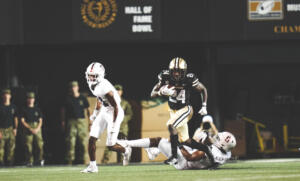 “He practices hard. It all starts in practice and he runs the ball extremely hard in practice,” Vanderbilt running backs coach Norval McKenzie said. “We put a premium on practice and how we run and how we compete and I thought that he showed up on Saturday and that’s a credit to him going really hard Monday through Friday.”

The town of Rincon, Georgia, lies about 30 minutes north of Savannah. It’s where Griffin spent his childhood and fell in love with football as far back as he can remember.

He recalls early conversations with his father that if Rocko truly loved the game he’d have to dedicate himself to it. The younger Griffin knew he had above-average talents early on, but never let complacency settle in as he took extra time on his own to train on his footwork and strength.

Griffin was setting his own stage for what was to come.

“I just feel like that’s a big part of the reason for who I am today as far as work ethic is because I’ve been doing stuff like that since I was younger – not because a coach made me do it but doing it on my own,” he said. 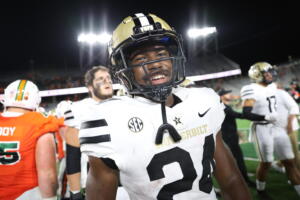 Choosing to attend Calvary Day School in Savannah to begin his prep career, the possibility of playing college football began during a summer camp at Duke where Derrick Ansley – then with Alabama and now with the Los Angeles Chargers – spoke to him about possibly playing for the Crimson Tide. One summer later the University of Louisville officially offered Griffin a full scholarship.

At Calvary, Griffin was becoming a star as both a running back and a defensive back. He also ran track and finished second in the 100 meters at the 2019 state championships. He taught himself how to swim as a way to help his body recover. He took up boxing for a better conditioning regiment.

Griffin transferred to South Effingham High School for his senior season to be closer to home. With the help of Austin Blaske on the offensive line, who Griffin will see on the other sideline Saturday, the 5-foot-9, 200-pound running back totaled more than 1,900 all-purpose yards and scored 17 times while leading the Mustangs to a playoff berth. 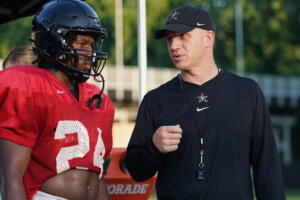 “Rocko’s success is in his consistency in all areas. He’s such a dependable worker. That’s been evidenced since the early months of my time here,” Vanderbilt head coach Clark Lea said. “He brings energy, he brings attention to detail, he brings effort, he brings a competitive spirit and a work ethic that has allowed him to have success when his number has been called.

“He’ll rely on that moving forward as a guy that will be featured in our offense. He was on Saturday (against Stanford) and he handled that really well. There was some good design, there was some excellent blocking up front, but there was also some runs for him on Saturday where he created. That’s because he’s a good player.”

Griffin has yet to declare a major at Vanderbilt, but that’s because he’s still exploring. He’s always exploring.

He joined the chess team his senior year of high school. He enjoys art, art museums, drawing and painting. He picked Spanish as a minor and hopes to put that skill to use with a professional career that includes travel. He absorbs anything encompassing Black History – including the lessons of Malcolm X, Nelson Mandela and Martin Luther King Jr. 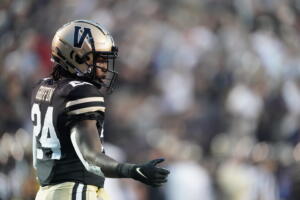 Griffin credits his father, who works for the Port of Savannah, and mother Tiffany Griffin, a student hearing administrator at the Savannah-Chatham County School System, for belaboring home the point that school comes before ball. He admitted that without their guidance he wouldn’t be where he is academically today.

As for the football field, today Rocko Griffin is the starting tailback for the Vanderbilt Commodores. Tomorrow he hopes Vandy fans know him for more than an athlete.

“The football field is going to speak for itself. If they really know who I am as a person then I feel like that’s what is going to have an ever-lasting effect here,” he said. “That’s a person that just loves life, who is going to be in the present and is not really doing things for fame or notoriety but just doing it because they love it and trying to impact people’s lives.”