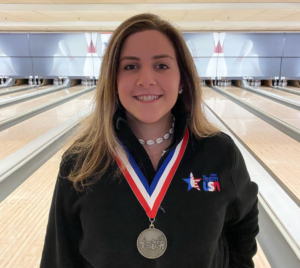 The Lake Ronkonkoma, New York, native sat in either first or second place in the Under-18 division through the five marathon days of competition – 26 games and multiple lane patterns – and had essentially separated herself from all but one other bowler in the massive field of 560. Naujokas was second to Jillian Martin of Stow, Ohio, after qualifying play – the top four qualifiers plus the two match play winners earn automatic spots on the USA team.

Naujokas joins Commodore teammates Mabel Cummins and Caroline Thesier who last week made the Junior Team USA after their top four finishes in the U-20 age division giving Vanderbilt three of the 12 squad members to this point.

“This shows that you can get a world class education and also represent the United States at the highest level of bowling,” Vanderbilt head coach John Williamson said. “It also showed the hard work Amanda has put in during the offseason. She played the lanes the way they were supposed to be played so it was not surprising that she did so well.”

Naujokas has been a dominating force at the national event since winning her age group in 2015. She has been among the top four qualifiers five times in seven attempts, making the USA Developmental Team three times.

“Making Junior Team USA has been one of my goals and it’s probably a bit more prestigious to make so this is very exciting,” Naujokas said. “My main focus was to make the top four in qualifying to get an automatic spot.”

“My secret is to just hit the head pin and make spares,” Naujokas said with a hint of a laugh. “I know it sounds simple but if you just make spares you will go far in this tournament. Since 2014 I’ve taken a lot of pride in my spares.

“And you don’t want to get too far ahead of yourself here, just think of one frame and one game at a time at try to make the best shot I can each time.”

Williamson said that the three Commodores could possibly be joined by a fourth as sophomore Jennifer Loredo, who did not compete in this year’s Junior Gold, has a chance to make the team in the USA Team Trials later this year.