It took a young coach’s undaunted recruiting, a family’s respect for education and the unexpected intervention of a rival head coach to make what seemed like a long-shot in 2005 appear to make total sense years later.

In the spring of 2005, Peloquin was on the verge of becoming valedictorian of Enrico Fermi High School in Enfield, Connecticut. She was also a high school bowling All-American, one of the top-rated prospects in the nation. Her oldest sister, Nicole, was ending her star-studded career at Sacred Heart University where her dad, Steve, was an assistant coach.

At the same moment in time the Vanderbilt bowling program was in its first year of existence where rookie head coach John Williamson’s non-recruited team was in the midst of going 12-69 and trying to figure things out on the fly.

Williamson knew from his time as a member of baseball head coach Tim Corbin’s first staff that recruiting was crucial and Williamson had already aggressively landed four top bowlers from around the country. Now he was going all out on a big fish, trying to persuade the gifted Peloquin to come to Vanderbilt.

It was a hard sell that seemed illogical to many.

“I had a hard time making a decision,” Peloquin Scherrer remembered. “I was caught because the more local bowling schools just assumed I was going to Sacred Heart. There wasn’t a lot of question about that. My sister (Nicole) had just graduated and dad was helping coach there. It was sorta hard because I wanted something different for myself.” 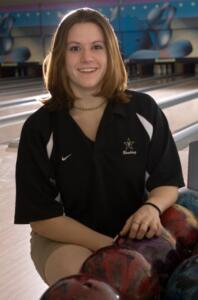 Peloquin Scherrer, whose mother Carol was a public school teacher, needed no prodding about Vanderbilt’s academic reputation – but that 12-69 record was scary.

“Ultimately I can’t deny that I was dragging my feet on a decision to see if anyone else was going to come,” Peloquin Scherrer said. “When I went on my recruiting visit Kaitlin Reynolds was with me and she seemed pretty sure she was going to commit. And I knew through word of mouth that there were others being recruited so I was trying to see how that would shake out.

“I was the fifth of the five of us to commit and I’d be lying to say that didn’t have an influence. I’m such a competitive person that I don’t think I’d have done great if we were going to repeat that same (12-69) record. “

This is where the unselfish advice of another head coach, Becky Kregling of Sacred Heart, came into play.

Buoyed by this advice, Peloquin committed late and that has made all the difference.

She stood next to President George W. Bush when the team visited the White House after winning the championship, the historic photograph now displayed in her parent’s nearby home for her two children, Nathan (6) and Zachery (4) and husband Tom to admire on their visits.

“I have so many memories,” Peloquin Scherrer said. “For a long time I felt a weird sense of regret. We had only won one championship. It sounds ridiculous to say that now because it’s so hard to win but in that moment you know you have something special and we believed we should have won more than one. It reminds you just how hard it is to win the championship.

“I had different feelings about that right afterwards than I do right now.  Part of that comes from perspective, being a bit older. We now realize what a big deal it was.” 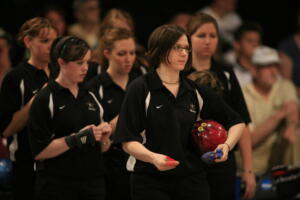 Peloquin Scherrer is, “super proud,” of her Vanderbilt chemistry degree and the lessons she learned as a Commodore.

When she graduated in 2009 she went straight to pharmacy school.

“Time management was a humongous lesson,” she said. “I had such a leg up on others in a graduate doctoral program. You could tell they never had to study for seven classes at a time. They never took six exams in three days. I was like, ‘got this.’ That’s not exclusive to college bowling but athletics in general.”

These are just some of the fruits of a Hall of Fame collegiate career, the results of taking a chance on the road less traveled 17 years ago.