Katelyn Parham grew up in Texas—which is to say, she grew up with football.

In her family, all other activities stopped when the games began on fall Saturdays. She treated the annual Heisman Trophy broadcast with the same reverence as birthdays. In Texas, a state with more high school football participants than California, Florida and New York combined, she watched from the stands as two older brothers took their turns in youth football.

“I grew up going to their middle school football games and falling asleep on my mom’s lap while she’s screaming and cheering for them,” said Parham, a student manager for the Vanderbilt football team. “From going down to the field after games to hug my sweaty, gross brother, all the way through going to the OU-Texas rivalry to now being on the sidelines at Vanderbilt, most experiences I’ve had with football, especially with my brothers, have given me great memories.”

Football isn’t, however, the only sport that connects Parham with where she’s from. Stickball, a sport similar to lacrosse, whose origins are most often associated with the Iroquois people, remains an important part of her culture as a member of the Choctaw Nation of Oklahoma. She grew up listening to family members tell stories about stickball and other traditions her ancestors practiced. She also learned about the Trail of Tears and has visited family still living in Oklahoma, where generations endured and sought to rebuild upended lives after being forcibly relocated there by the U.S. government in the 1830s.

Representing an Indigenous presence that’s rare on a Power Five sideline, Parham and other members of Vanderbilt’s Indigenous community bring experiences, histories and contemporary concerns that inform and strengthen the university community. Those community bonds are particularly strong within the football team, she says.

“That’s something that you guys can’t see on the field, but really, football is family,” said Parham, a junior public policy and anthropology major now in her second season working with the team. “The coaches and the players all have my back, and it’s nice to be a part of that community.” 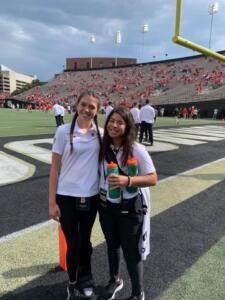 At Vanderbilt, Parham found a football program that not only scratched her gridiron itch but valued the unique experiences she brought to the family that takes the field every Saturday.

Sophomore Rhylee Tucker enjoys a similar experience with the track and field team. A high school runner, she seized the opportunity to work as a student manager with cross country and track and field director Althea Thomas’ ascendant track program. As daughters of fathers who coached a variety of sports, Tucker and Thomas bonded over their shared formative experiences.

Among the first to arrive before practice and last to leave when the day is done, Tucker is still learning the nuances (and often the terminology) of training and training equipment at an elite collegiate level. But she, too, feels invested in the group beyond the level of a normal fan.

“The highlight for me is just seeing the girls do better and achieve their goals,” Tucker said.

From a small town south of Oklahoma City, Tucker has both native Hawai‘ian and Cherokee heritage. For her, the educational aspect of Native American Heritage Month is personal. Growing up, she wasn’t surrounded by her family history. She knows bits and pieces of the story but wants to know more. Rather than let her history be a story of the past that fades more with each passing generation, she wants to help rekindle knowledge of Native American culture and raise awareness of the pressing challenges facing those communities today.

“We were here, and we are here,” Tucker said. “It’s very important that we acknowledge that and acknowledge the land that we reside on as well—whose land it was. It’s important to know our history and keep that in mind in everything we do.

“It’s my responsibility to learn more about it and continue to learn.”

The theatre major is part of the Indigenous Scholars Organization, a campus group that “aspires to serve a critical role in promoting the cultural knowledge and community involvement of its members in a collaborative environment, as well as educating the broader Vanderbilt and Nashville community about Indigenous cultures.” The group has organized events ranging from speakers on Indigenous issues to social mixers and an exhibition of traditional song, dance and poetry.

The former vice president of the ISO, Parham is similarly attuned to not just history but to contemporary issues, including the current case in front of the U.S. Supreme Court relating to Indigenous sovereignty and the Indian Child Welfare Act, Haaland v. Brackeen. For her, Indigenous heritage is living heritage, which also shaped a memorable experience this fall.

Traveling to Hawai‘i for the football team’s season opener ranks among the highlights of Parham’s Vanderbilt experience, but she also found it a humbling opportunity to experience the Native Hawai‘ian community. As part of the trip, the student-athletes and staff participated in community service with a local education organization “connecting our past with a sustainable future.” But even before the trip, Parham spent time researching issues relating to everything from land occupation to disputes over water rights and telescopes on Indigenous land.

These guys cutting out weeds and invasive plants from the hillside pic.twitter.com/o8AmREZrmF

“I have to recognize that I am an outsider in every land that I touch—those aren’t my communities,” Parham said. “I can navigate that respectfully by researching, by knowing whose land I am on, what I’m doing on that land. Is it respectful to the natives before me, and will it leave it better for the natives after me? That’s my goal when I go into a new place: do the research, see what movements are going on and if I can support them in any way.”

For Parham and Tucker, understanding who you are and where you come from is fundamental to bringing out the best in the community that surrounds you.

In 1897, James Burney “J.B.” McAlester, a member of the Chickasaw Nation, became the first Native American student-athlete to play football at Vanderbilt.

As part of the university’s Sesquicentennial Grant Program, Daniel Sharfstein, Dick and Martha Lansden Chair in Law, professor of history and co-director of the George Barrett Social Justice Program, will research more than a dozen Cherokee and Chickasaw students who attended Vanderbilt between 1885 and 1899. The project seeks to “recover, explore and publicly commemorate these students’ paths to Vanderbilt, their experiences in Nashville and their careers.”

Vandy senior Christian James cherishing his time with the Commodores