NASHVILLE, Tenn. — Those who come to Vanderbilt University to play quarterback for Joey Lynch will undoubtedly have to be well-versed in the playbook and have a sharp eye for studying film.

But Vandy’s first-year quarterbacks coach and pass game coordinator will value something else just a bit more.

“That’s us doing things right day-in and day-out in how we prepare, how we practice and how our mentality is in everything we do. As a quarterback of a football team, you have to be extremely competitive and do all the little things right. Ultimately, when you do that, the big things will take care of themselves.” 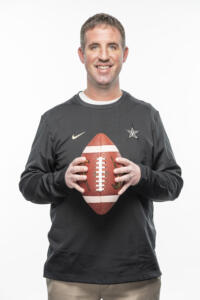 Lynch knows good quarterback play when he sees it – his own playing days as a signal caller and his coaching resume speak to that.

The Muncie, Indiana, product starred at Ball State, where he threw for nearly 4,300 yards and 37 touchdowns passes. He begins his 14th year of coaching having been the offensive coordinator at his alma mater and, most recently, at Colorado State, where his attacks had a propensity for putting up points and yards.

Lynch jumped at the chance to help inject some of those gaudy numbers into Vanderbilt’s offense starting this fall.

“When coach (Clark) Lea reached out and started initially talking about the opportunity, I was fired up,” Lynch said. “As we started talking about his vision and where we’re going as a football program, it was an opportunity I couldn’t pass up. I’m excited to be part of it.”

While Lynch’s main responsibilities will be to lead the quarterback room and develop a dangerous aerial attack, he said ultimately it will be up to his five fellow offensive assistants to formulate a cohesive system that generates success – no matter what everyone’s title is.

That’s a lesson he has learned over time, along with coaching pointers from his father Bill Lynch (a former Ball State and Indiana head coach who retired last year after 45 years in the profession) and brother Kevin Lynch (now the offensive coordinator at Ball State).

As for quarterback play between the white lines, Lynch evokes some baseball terminology when describing what to expect from his young men under center. 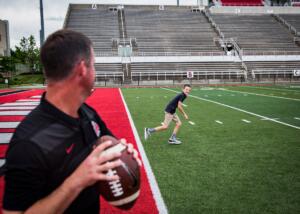 “From a skill standpoint it’s our job to manage the game and put the ball in play. In the course of a football game, there are enough plays to be made. Quarterbacks just have to make the plays when they present themselves. You can’t force it,” Lynch said. “It’s our job to keep our offense out of bad situations and ultimately, the great ones, they always put the ball in play. It doesn’t always look the way you draw it up on the board, but the great ones find a way to put it in play, get the ball to our playmakers in space and let them make plays for us.

“Those are some things that we’ll talk about starting on day one. We’re looking forward to building it.”

Vanderbilt returns young quarterbacks Ken Seals and Mike Wright, both of whom made great strides during their first years as Commodores in 2020. But Vandy ranked 110th in total offense and 125th in scoring offense last season.

All that is in the past, of course. Lynch and company will be building from the ground up – and that’s exciting to everyone in the building.

“When you come into different situations or take new jobs, sometimes the staff has been there for a couple years, but we’re starting this thing fresh and can build it from the ground up the way coach Lea wants to,” Lynch said. “I have some young quarterbacks in the room. It will be fun to see them develop and see their growth. And then just build great relationships. We’re going to do this thing together and we’re going to need everybody.

“It all starts this winter and this spring. We’ll start laying our plan and make sure we go execute it.”