NASHVILLE, Tenn. — When Justin Lustig was presented the opportunity to join Clark Lea’s staff, he knew it was one he couldn’t pass up.

“Coach Lea’s vision for where Vanderbilt can go and the things we can accomplish is exciting,” Lustig said. “To be on the ground level building something is special. It certainly guided my decision to join his staff.”

Lustig, Vanderbilt’s new assistant head coach, special teams coordinator and tight ends coach, arrives in Nashville after four impressive seasons at Syracuse where he coached special teams, running backs and outside receivers. It was there that Lustig went up against Lea and Notre Dame during the 2018 and 2020 seasons.

Mutual respect and admiration grew out of those matchups and now each has the chance to create something new in Nashville.

“It’s a fresh start, a blank canvas, a chance to reinvent myself and reinvent my system of doing things special teams-wise,” Lustig said. “As a position coach, each year usually presents itself with different challenges and opportunities. Both are critical to learn from and make me a better person and teacher. I’m excited to meet the players and get to work.”

Before Syracuse and before becoming a Commodore, Lustig led Edinboro in Pennsylvania to a 9-2 record in 2016 and he was named D2Football.com’s Coach of the Year. Edinboro went from 0-11 in 2015 to 9-2 under Lustig’s leadership. 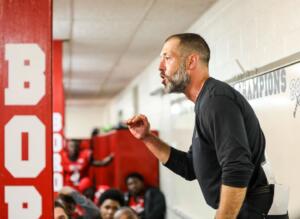 The Bucknell graduate also has made stops at Villanova, Louisiana-Lafayette and Ball State, among others.

A couple of his main pillars to lead by include communication and accountability, aspects of his leadership he’ll strive to bring to West End everyday.

“Communication and accountability are leadership aspects and standards that I find to be incredibly valuable. They go hand in hand. I’ve always believed in the saying, ‘you’re either coaching it that way or you’re allowing it to happen.’

“Communication plays a huge role in having everyone on the same page. I think is important from a big-picture perspective to whether it’s the entire program or just special teams. A team moving in the right direction together, pushing for the same goals, speaking the same language and knowing the main objective is powerful. Being held accountable is extremely important. First we have to own our mistakes and we must learn from them. Everyone is accountable to strive for excellence in whatever they’re doing.”