NASHVILLE, Tenn. — Three life-altering events, all before a 21st birthday in November, have shaped who Tyrin Lawrence is and who he is becoming.

For the Vanderbilt guard, adversity and triumph on the court are unmatched to all that he has experienced off of it. Nowadays, as the sophomore looks to close out his second season with the Commodores in strong fashion, he takes the floor with a mindset to contribute however necessary for the betterment of his team.

“I’m doing whatever I can, whatever (Vanderbilt head coach Jerry Stackhouse) wants me to do,” he said.

On May 31, 2018, Ivan Lawrence stayed awake late into the night watching the Cleveland Cavaliers play the Golden State Warriors in Game 1 of the NBA Finals. He wasn’t going to miss the epic matchup between Cleveland star LeBron James – who would score 51 points that night – and Golden State’s Kevin Durant who would go on to be named Finals MVP.

When the game ended, Lawrence got a few hours of sleep before heading to work his night shift, which began at 3 a.m., at a nearby distribution center. Later that morning he returned home after a long night’s work. He asked his youngest son, Tyrin, to help him download an application on his smartphone.

Around noon, Ivan Lawrence left his house in his car by  himself. He never made it to his destination.

Tyrin’s older brother phoned Tyrin and said their father had been involved in a fatal car accident. Confused and alarmed, Tyrin tried to reach his mother to confirm the news, then was driven by a friend’s parent to the scene of the one-vehicle, fatal accident.

“It was shocking, really,” Tyrin said.

At just 40-years-old, Ivan Lawrence died after a life of restoring vehicles, watching sports, entrepreneurship, encouraging young people and helping his hometown of Monticello, Georgia, grow and thrive, according to his obituary. He left behind four children.

It took weeks and month for Tyrin to accept the reality that his father was gone.

“It was pretty hard in the beginning,” Lawrence said. “I didn’t want to go anywhere or do anything.

“It made me realize we’re not here forever, so just always try to fix problems you may have with someone. Now I try to be on good terms with everyone at all times and just try to do right.”

From Kansas to a Commodore

Ivan Lawrence’s death didn’t derail Tyrin’s basketball success. The 6-foot-4, 195-pound guard continued to thrive in the sport he began playing since he was 5 and was becoming increasingly passionate about.

His four years at Morgan County High School included more than 1,500 career points and his being named the Georgia State Player of the Year in Class AAA. The local newspaper decreed that Lawrence was one of the best to ever suit up for the Bulldogs.

Yet Lawrence wasn’t really being highly-recruited, he said. There were scholarship offers from a few smaller programs and discussions with Power 5 teams, but Lawrence knew in his heart he could compete on a bigger stage.

So in the fall of 2019 he decided to bet on himself and enroll at Sunrise Christian Academy in Kansas.

“To be honest, it was difficult. I felt like I was in the middle of nowhere,” Lawrence said. “But it definitely helped me from the aspect of it was basketball and nothing else more to do.”

Lawrence began to see the fruits of his labor pay off with scholarship offers coming in from the likes of California and Mississippi. Then former Vandy associate head coach David Grace paid Lawrence a visit. Then Vanderbilt assistant coach Adam Mazarei started a relationship.

Pretty soon Lawrence was speaking to Stackhouse about the possibility of playing for Vanderbilt University.

“They all seemed like pretty good people and all wanted what’s best for me,” Lawrence said. “And knowing that they’ve been there in the professional ranks just added to it, being able to learn from guys that have been there at the highest level.”

A Big Brother and a Bad Break

Before the eighth game of Lawrence’s freshman season at Vandy, after he had played in seven games, everything came to a screeching halt on one play in a January practice.

Lawrence tore the ACL in his left knee, ending his 2020-21 season with the Commodores. 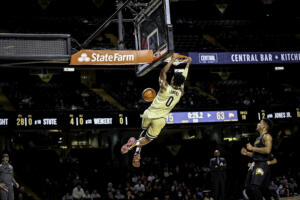 “Coming back from injury was definitely a challenge, regaining all the strength and learning how to walk and stuff like that. But on the other side of the injury I think I definitely came out better,” Lawrence said. “I think I am more prepped for adversity, just being mentally stronger. Sitting out the whole time I got a chance to watch and look at it from a coach’s perspective and try to learn. I learned a lot while I was out.

“I’m still working out, still gaining confidence in my leg and my knee, but for the most part I feel like I’m doing the best I can.”

Lawrence also had a shoulder to lean on through all lonely days and nights in Kansas, after the tough rehabilitation sessions in 2021 and when still trying to cope with the recent loss of his father. His older brother De’Ivion Lawrence took Tyrin under his wing knowing a stern voice was necessary from time to time.

“We got even closer after our dad died. We started talking pretty much every day and when he was being recruited he would ask me what I though about each school and I would tell him how I felt and would give him advice,” De’Ivion said. “I try not get too much into basketball because I know there’s much more to life than basketball.

“I ask him how he’s doing academically, how is life is treating him? There’s a lot of people that are going to be there for him and care more about him in life than in basketball. So I try to speak to life more. I just tell him to keep working and better days will come.”

On March 6, Kylan Lawrence was born in Georgia. His father? Tyrin Lawrence.

Tyrin, however, was with the Commodores that day in Oxford, Mississippi, watching Vanderbilt play Mississippi. When the team returned to Nashville, Stackhouse gave the Vandy freshman leave to return to Georgia to meet his son.

“It was unreal. I never imagined being a father, especially this early,” Lawrence said. “It gives me extra motivation just knowing I have a son depending on me now. I think it makes me strive that much harder knowing I got to provide for him.”

Nineteen games into the 2021-22 season, Lawrence has started nine contests and is averaging a modest 4.2 points and 2.4 rebounds per game. On Nov. 20, with Kylan in the stands at Memorial Gymnasium, Lawrence scored a career-high 20 points and showed a glimpse of the type of play he could bring in the near future.

Lawrence, a human and organizational development major looking to minor in either business or sociology, said that he continues to work daily on strengthening his leg so that he can return to being the same explosive player he was before the 2020 injury. He yearns to be more aggressive, to make the correct reads defensively and to be a defender who can be counted on to be in the right place at the right time.

“If he keeps working, I think the sky’s the limit for Tyrin,” De’Ivion said. “I think he can do anything. He’s always been able to do anything he puts his mind to. I always tell him day-in and day-out, ‘Be the best Tyrin you can be. Don’t hold back for anybody and whatever you want in life will come to you.’ ”

When Lawrence takes the court at 5 p.m. Saturday with the Commodores (10-9, 2-5 SEC) inside Memorial Gymnasium he’ll see a familiar opponent in the Georgia Bulldogs (6-14, 1-6 SEC). The opposition will undoubtedly remind him of his homeland.

And it will remind he plays every minute for his son, for his siblings, for his mother – and for his father.

“I think about him pretty much every day, Lawrence said, “just hoping I’m making him proud.”