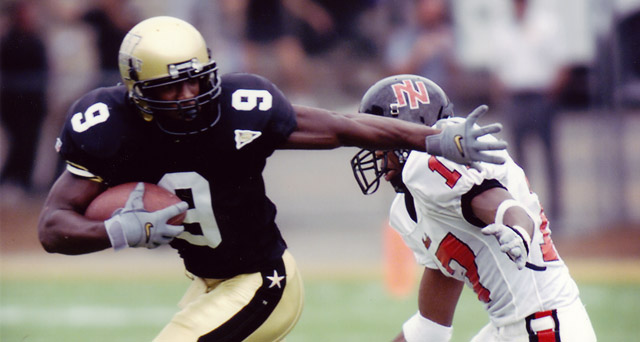 BIRMINGHAM, Ala. – Jimmy Williams, a former Vanderbilt cornerback and running back from 1997-2000, was named Vanderbilt’s representative in the SEC’s 2013 Football Legends Class.

A former player from all 14 institutions was selected and will be honored at the 2013 SEC Football “Weekend of Champions” Dec. 6-7 in Atlanta, Ga. The annual SEC Legends Dinner presented by AT&T will be held Dec. 6 at the Hyatt Regency in Atlanta and the group will also be recognized prior to the SEC Football Championship Game, which will be held at the Georgia Dome on Sat., Dec. 7.

Williams is one of only three players in Vanderbilt history to return both a punt and kickoff for a touchdown. A native of Baton Rouge, La., Williams was a Freshman All-SEC pick as a starting running back, who led the Commodores in rushing and receiving.

In 1998, Williams earned All-SEC honors as a cornerback. After moving to defense, Williams was among the team’s interception leaders three straight years and ranks 10th in school history with 10 career interceptions.

After his Vanderbilt career, Williams was drafted by the Buffalo Bills and he played six years in the NFL with San Francisco and Seattle before an injury forced his retirement.

After his playing career, he started the Intercepting Our Youth Foundation to benefit youth in Baton Rouge.