Getting to Know Marlow

Vanderbilt running back Ja'Veon Marlow sits down for Q&A on football, Vanderbilt and life

NASHVILLE, Tenn. — With Ke’Shawn Vaughn being drafted in the third round of the 2019 NFL Draft to the Tampa Bay Buccaneers, the 2020 Commodores had big shoes to fill at running back.

Spring football practice was going to provide clues as to who might take over at the running back position until the COVID-19 pandemic put a halt to workouts in March. Fall camp was also delayed until an official SEC schedule was set.

Finally, through the ambiguity and uncertainty, the shoes have been filled by Ja’Veon Marlow and Jamauri Wakefield.

After previously only having 88 career rushing yards at Vanderbilt, Marlow has already run for more than 150 yards through the first two games of the 2020 season.

One of the biggest rushes came on the third play of the season against Texas A&M. Marlow had a 21-yard rush on third down to extend the Commodores’ drive.

Marlow sat down with VUCommodores.com to reveal how he prepared for his fast start, the lessons he has learned while being at Vanderbilt and his inspirations and goals for after college:

VUCommodores.com: You already have more than 150 total yards through the first two games of this season. What did you do different in the offseason to prepare for such a fast start?

Marlow: “During the offseason a big goal of mine was to get my legs back under me while also getting stronger. I battled through knee injuries my first two years here. Those injuries hindered my running and cutting abilities which is a big part of my job. Then from there, I just focused a lot on the little things that would help improve my game as well.”

While at Vanderbilt, you have played with many guys in that running back room who have made it to the NFL. What lessons have you learned from them that you use today?

“The older guys held me accountable on and off the field my first two years here. They helped me grow and mature at a fast pace and always told me to focus on the bigger picture. I always listened to the things they told me because they had been in college longer than me and were giving me tips from experience.” 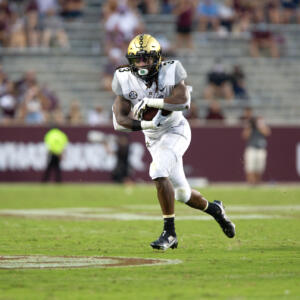 What did you learn early on in your college career that you try and pass down to the younger running backs?

“Early in my career I learned to always take care of my body on the front end, so that I will be able to still last on the back stretch of the long season. That is something I will always preach to young guys because it is no joke.”

When you’re on the football field what is your inspiration that drives you?

“The thing that inspires and drives me when I am on the field is thinking of my mother, my grandparents and all the stuff we have been through. Thinking of that just makes me go harder because remembering those times we struggled makes me never want to go through that stage again. I go out and give my all every game. I know football and my education is one of my ways out of where I am from and it will help my family have a better life that we really ever had.”

Why did you choose to attend Vanderbilt?

“My reason for attending Vanderbilt is also to better my life and my family’s life. Vanderbilt is one of the best institutions to get a degree from and I have always wanted to be known for more than just a football player. I have a hidden intelligence that no one really knows about because in the environment I grew up in I rarely made it known.”

What are your goals for after college and after football?

“My goal for after college is to go to the NFL and get as much out of football as I still can. While doing that, I want to slowly develop a family and enjoy things I really never had the chance or time to do during my lifetime.

“I am really not sure what exactly I want to do after football, but I know it will involve helping kids. I am a psychology major so I hope to do something in that field.”

What is the cause that you are representing on the back of your helmet and why is it important to you?

“The cause that I am supporting on the back of my helmet is equality. I get very upset when someone is treated differently or unfairly just because of their appearance, ethnicity or whatever that is. It just isn’t right in my eyes.  I know I especially hate when it is me being treated unequally.

“I am strongly supporting equality to make notice that you do not have to treat others unequal – no matter how they look or speak. There is just no point to it.”