NASHVILLE, Tenn. — Samantha Gainor was watching television one evening in April of 2013, perhaps wondering if her beloved Detroit Tigers were playing. Instead of baseball, she ran across the NCAA Bowling Championship title match featuring the Vanderbilt Commodores and the Nebraska Cornhuskers.

She stopped, watched and began to dream.

“That can be me one day,” she recalled thinking. “I want to go there.”

“There” was Vanderbilt University.

In Hollywood the scene would flash to Gainor making an unforgettable shot to spur her Commodores to the 2018 national championship, the credits would roll and all would live happily ever after. But real life isn’t found on a movie set – Gainor could tell you as much.

Gainor grew up in Chesterfield, Michigan, about a half hour north of Detroit on Lake St. Clair, just across the border from Windsor, Ontario, Canada. She was always into sports and played darn near all of them – basketball, baseball, soccer – and at the age of four she started bowling in the Friday bumper league with her best friend.

She and bowling hit it off and pretty soon she was having fun in leagues. Her mother (Debbie) saw her potential and along with her grandma, Barbara Tollzien, began hauling her to Michigan Junior Masters Association events around the state. Before long, Debbie lined up lessons with Lou Marquez, one of the top bowling instructors in the Detroit area. 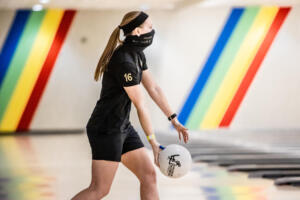 Mother, a non-bowler, and daughter began learning a lot about the sport – mom sitting within earshot of Marquez as he explained and demonstrated the nuances of the complex game to Sam. Pretty soon Debbie had a bowling app on her IPad and was charting all of Sam’s games.

They were quite the team, although Gainor remembers a tournament in an adult/youth league in which her 200+ average was negated by mom’s struggles.

Gainor, a natural athlete, became a Dexter All-American, was named first-team all-state twice and was a high finisher at the Junior Gold, attracting considerable attention from top collegiate bowling programs. But she knew where she wanted to go and that’s where things got a little complicated.

Despite having good grades in high school, Gainor was not admitted to Vanderbilt on her first attempt. Instead she was waitlisted and that news was hard to take.

“Is it worth it to keep trying, should I try to go somewhere else, do I still want to bowl in college?” These were among the questions Gainor asked herself while considering Vanderbilt’s advice to attend a community college, get excellent grades and hope to enter via the transfer route.

“Sam did absolutely everything she was asked to do,” remembered Vanderbilt head coach John Williamson. “Most kids would have given up on the idea, gone somewhere else and that would have been the end of it. But not Samantha Gainor, she wanted to be a Vanderbilt Commodore.” 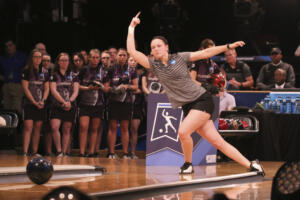 Gainor would eventually transfer in but it would be too easy if everything went smoothly from that point.

“I was so excited to get here but then I struggled academically the first semester,” she said.

She questioned herself, “can I do this? Can I make it three and a half years?”

But she discovered answers, finding encouragement and support from academic advisors such as Candice Johnson, teammates, coaches and the bowling family.

And just like that, we’re back to Hollywood. It’s Game 7 of the 2018 championship match between top-ranked McKendree and Vanderbilt, all tied up at 3-3, with the ESPN cameras sending the match live across the world.

Putting the rookie Gainor into the lineup had been a game-time decision. Not only would she bowl, she’d be placed in a new spot in the rotation.

“Going in as a freshman, I didn’t know what to expect. Everything was brand new to me,” she said. “It was the first time I led off the entire year. To not only be in the lineup but being leadoff, I was getting to start.

“I remember the seventh game. Everyone was getting a bit more nervous because we had made it to the seventh game. I went up and threw that shot (leaving the 1-2-7-8-10) and I kinda laughed because I was like, ‘what a good start.’ What even is that? I don’t think I ever left that before.”

An open frame starting the decisive game could be demoralizing in the 10-frame sprint for gold and glory.

“(Associate head coach) Josie (Barnes) was like, ‘OK, move here and throw it here.’ I was like, ‘Alright, I guess I’m going to make it.’ As soon as it left my hand I knew it was the right direction.”

The improbable conversion, considered by some to be the biggest spare shot in program history, electrified the Vanderbilt team which proceeded to blow the match open with five straight strikes to seize the coveted championship trophy.

A Hollywood movie script? On second glance, maybe it is. Gainor’s storyline serves as a blueprint for people everywhere that have been knocked down and battled back.

“I’d like to be remembered as someone that didn’t give up,” she said with typical modesty.

Gainor has been admitted into Vanderbilt’s graduate school where she will study marketing in hopes of someday working in a professional sports franchise. She will eventually leave Vanderbilt with a master’s degree.

And bowling fans will have one more year watching Gainor compete as she is taking advantage of the NCAA’s COVID-19 policy that allows student-athletes a redo on this unusual year.

How ironic that Gainor will end up with the longest tenure on the Commodore roster in program history?

Roll the credits — it’s been quite a show.