Young Commodores bring much of roster back in 2020-21

NASHVILLE, Tenn. — Vanderbilt had all the momentum it could ask for before tipoff Wednesday going into the SEC Tournament.

Momentum is a funny thing. It cares not about what happened at any point in the past.

“I think it just didn’t work out for us,” Vanderbilt head coach Jerry Stackhouse said about Wednesday’s result. “We got a lot of good looks that we were happy to get that didn’t go down for us early in the game. Arkansas on the other hand came out and got off to a pretty good start.

“Some of it was our own doing, again just not being able to have the disposition and urgency that we needed to start the game. We eventually got it, but it was just a little too late.”

The Commodores saw their season come to a close with an 86-73 loss to Arkansas at Bridgestone Arena. It was a tough pill to swallow for a team that had fought so hard to recently turn the corner with a depleted and young roster after a season of more downs than ups.

Vandy started the night ice cold from the field. After Scotty Pippen Jr. made the first attempt of the evening, a 3 from the top of the key, the Dores missed 19 of their next 22.

The Razorbacks (20-12) led by as many as 15 in the first 20 minutes. That was just too big of a hole for Vanderbilt to climb out of despite numerous scoring runs in the second half.

“We forget sometimes this is a lot of these guys’ first experience of playing at a big tournament like this,” Stackhouse said. “I thought for the most part we handled it better as the game went on – we didn’t handle it well from the very beginning. We were in the wrong places, doing some things that are out of character – I think the moment got the best of us today.

“Just like the earlier part of the season, this experience of being here is going to help us next time. I think sometimes it can be overwhelming and maybe that was the case tonight and that won’t be the case next time we’re here.”

Despite the Commodores’ disappointing end to the 2019-20 season, there are numerous pillars of hope for the program.

Saben Lee turned into a bonafide scoring threat and team leader, especially down the stretch. The junior guard finished with 30 points Wednesday, his fourth contest with at least 30 points in the season’s final 11 games.

But Lee also saw a supporting cast evolve and develop and improve around him.

Vanderbilt had three other players in double figures Wednesday – Pippen Jr., Dylan Disu and Jordan Wright – and all three were freshmen. Pippen Jr., led the team at point guard for virtually every game and the majority of team’s minutes, Disu (who had a double-double Wednesday) showed the ability to score, rebound and blocked shots and Wright became a defensive specialist who can also pour in tough buckets on the other end.

“Yeah, I’m real excited,” Disu said about the program moving forward. “I feel like we played very well at the end of the season. Guys improved throughout the season, myself included, improved on our games.

“Going into the summer we want to continue to improves our games and have much better season next season.” 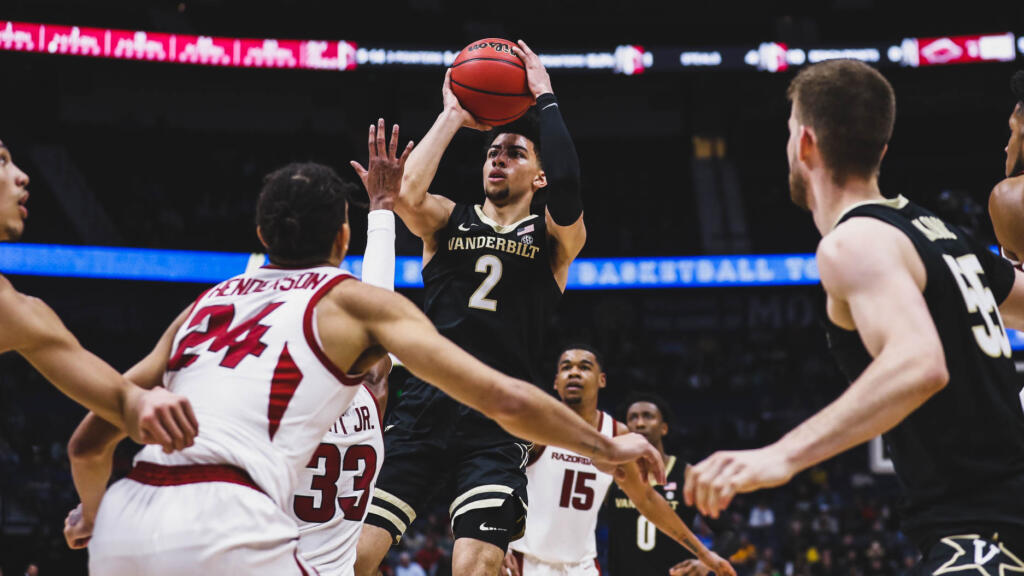 Junior guard Maxwell Evans, freshman guard Braelee Albert, redshirt-sophomore center Ejike Obinna and redshirt-junior forward Matthew Moyer could all return as well. Sophomore guard Aaron Nesmith, who missed nearly the entire season with a foot injury, will decide in the coming months whether to return to campus or go into professional basketball.

“I’m excited about it. I’m excited about some of the pieces that we already have,” Stackhouse said about the prospects of the 2020-21 season. “(Harvey) and (Millora-Brown), they’re going to be big additions for us. Next year I’m going to have a lot of little toys in my toy chest. I can’t wait to play with them.

“It’s an exciting start to see the possibility of who we can be and having a few more options next year.”

Perhaps the biggest hope for the coming of the ’20-21 season will be the return of Stackhouse, the former North Carolina and NBA star who proved his worth during the course of his maiden voyage through college basketball and the SEC. Stackhouse improved the Dores’ overall win total by two games and their league win total by three – all after losing Nesmith (the team’s leading scorer) and starting center Clevon Brown.

The foundation is set for the immediate future on the West End, a future which holds much promise.

“I don’t know if young guys going forward coming in as a group will have that opportunity (to play as much) because we’re going to be an older group that really understands how we want to play and how we want to do things,” Stackhouse said. “So their learning curve is going to have to be a little bit shorter to be able to get on the floor as much as these guys have.

“But I’m proud of this group. Proud of how they came in every day and brought it and stuck together.”