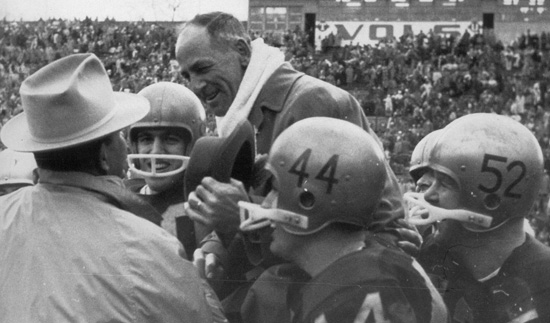 “There is no way you can be Harvard Monday through Friday, and try to be Alabama on Saturday.” Former Vanderbilt head football coach Art Guepe at the end of his 10-year tenure offered this quote.

Guepe was hired away from the University of Virginia to revive the Commodores in 1953 after the athletic department was suffering financially with a declining football program. He was made athletics director and the university knew of his reputation of good character, a tireless worker, brilliant strategist and very business savvy.

The athletics department’s $200,000 deficit that Guepe inherited would be a challenge to him. On the football field, Guepe was replacing Bill Edwards who in fours years was 21-19-2. The previous two seasons the Commodores were 6-5 and 3-7. The poor financial situation would handicap Guepe right away when the University’s Vice Chancellor Madison Sarratt announced the hiring of Guepe he said:

“We like his character of football and his economy of operation. Under him we will reduce the number of scholarships by 10 and the coaching staff by one number. Mr. Guepe’s contract at Virginia was to expire on March 1, therefore Vanderbilt did not get him to break any agreement there.”

Guepe was named head coach on Feb. 6, 1953 just two hours after Edwards offered his letter of resignation. It was reported that Guepe interviewed for the Vanderbilt position two days before Edwards’ resignation.

Guepe was a star quarterback for Marquette University (1934-36) in the great backfield with All-American Ray Buivid and Ray Sonnenberg. Guepe’s identical twin brother Al also played on those teams. His undefeated Golden Avalanche would play in the first Cotton Bowl in 1937 against Texas Christian and Sammy Baugh. Guepe returned a punt 60 yards for a touchdown and the first score of the game, which was the Cotton Bowl’s first ever six-pointer. TCU won the game, 16-6.

After graduating, Guepe served one season as Marquette’s freshman football and basketball coach. Guepe became an assistant football coach at Virginia from 1938-42 and served in Navy during World War II. He would become Virginia’s head football coach from 1946-52.

Guepe recorded one of the best records at Virginia compiling a 47-17-2 mark. He won eight games in each of his last three seasons while his 1951 team was 8-1 and ranked 13th in the nation. Guepe’s first Vanderbilt squad in 1953 lost its first four games, but ironically beat Virginia 28-13 in Nashville for his first Commodore victory. The Commodores finished the season 3-7-1 (SEC, 1-5). 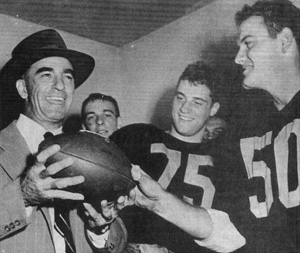 The 1954 season was not an improvement losing the first seven games while beating Villanova and Tennessee to finish at 2-7 (SEC-1-5). The 1955 season was a surprise as the Commodores were 8-3 (SEC, 4-3) and participated in the school’s first ever bowl game. Vanderbilt upset No. 8 ranked Auburn, 25-13 in the Gator Bowl.

In 1954, permanent lights were added to Dudley Field for the first time. Guepe used the Gator Bowl receipts to build new athletic offices at the north end of the stadium. He helped design the steel addition of 5,000 additional seats on the east side of Dudley Field raising the capacity to 34,000. Funds from the athletic department were used without loans. Still it was difficult for Guepe to recruit nationally to secure enough talented players for competition in the SEC. In an interview in the late 1980s, Guepe talked about his limitations coaching football at Vanderbilt.

“The only `strings’ I ever pulled with the faculty was to seek the professors’ assistance to make certain our guys were attending their classes. I always felt if our players went to class they were smart enough to make their grades if they were industrious and applied themselves. Like every other school, we had some guys who didn’t make it. Not many, though, and those that stick around not only contributed to our football program, but subsequently make it in life. I’m proud of them.

“We took some chances on marginal students, and everybody concerned–players, administration and coaches–understood that if a boy didn’t make it in school, we weren’t going to pressure somebody into helping us.

“But, along in the late 1950s, though, there was a major change in the university’s attitude towards admitting marginal students. I was alerted to this change by Dr. Sarratt, who realized as well as the coaching staff that this change was going to make it more difficult for Vanderbilt to compete in the SEC.

“Nobody in authority on campus ever told me my position was in jeopardy. But, a man close to the chancellor [Dr. Harvey Branscomb] warned me that I might consider resigning as coach before the losing football situation was beginning to create some factions on campus as well as among our supporters. I decided it would be better for everybody if I stepped aside.”

Guepe’s twin brother Al would make many appearances at Vanderbilt functions since he was also an assistant coach for brother Art. The late sports writer John Bibb of The Tennessean wrote about the twin brothers:

“A classic mistaken-identity tale involved the twins and a Chattanooga sports editor, the late Austin White who came to Nashville to do a preseason story on the Commodores. Through the Vanderbilt sports information director, Elmore (Scoop) Hudgins, White arranged a breakfast interview with Art. At the last minute, an emergency prevented Art from meeting the appointment. Hudgins immediately called on Al.

“The interview went well, with White thinking he was talking to Art, not Al. White was so impressed that he decided to stick around and talk some more after the Commodores’ practice. At the conclusion of the workout, White cornered Art and resumed the interview. Hudgins cringed:

“`I could see years of association with Austin White going right out of the window,'” said Hudgins. `But, a funny thing happened. Art and Al thought so much alike that Art never missed a beat in picking up where Al had left off in the morning. The second interview went just fine.'”

“It was several years later that White became aware of the switch: “`Even after Scoop confessed what happened, I couldn’t believe it. The fact is, it was one of the better interviews I ever had with Art–or was it Al?'”

After leaving Vanderbilt, Guepe became the first commissioner of the Ohio Valley Conference from 1963 to 1975. His son, Arthur A. Guepe, Jr. also played football for his father at Vanderbilt from 1961-63.

Traughber’s Tidbit: Vanderbilt played Paul “Bear” Bryant’s 20th ranked Alabama squad in 1958 to a 0-0 tie on a rain-soaked field that totaled eight turnovers. Vanderbilt reached the Tide 18-yard line before the clock ran out. Bryant would send plays in on written pieces of paper that littered the field after the game.

If you have any comments or suggestions you can contact Bill Traughber via email at WLTraughber@aol.com.