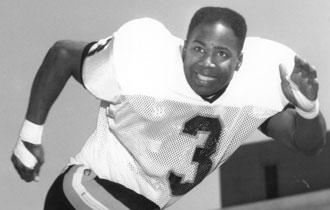 Most people go through life without achieving greatness, transforming lives, improving communities and making a global impact. But Dr. Renford Reese is not most people. He is a uniquely talented and driven individual who creates a better world through his books, lectures and community-based programs.

A political science professor at Cal Poly Pomona University, Reese founded the Colorful Flags program–in the wake of race-based violence–which helps people to achieve cross-racial understanding. Schools, police departments and social-service agencies use the program to foster racial harmony. He developed a Reintegration Academy that helps young parolees turn their lives to the positive. He has traveled to 58 countries, studied at the United Nations Institute for Social Development in Geneva, Switzerland, and soon will deliver a series of lectures in the Far East at the behest of the U.S. State Department.

But long before Renford Reese began changing communities and affecting lives, he made an impact on the football field at Vanderbilt University. A native of McDonough, Ga., Reese began his Commodore gridiron career in 1985 as a redshirt freshman under Coach George McIntyre. He then played four years under the tutelage of Watson Brown–playing middle linebacker, outside linebacker, cornerback and safety.

He played against the best of the best, locking horns with the likes of Emmitt Smith from Florida, Carl Pickens from the University of Tennessee and Rodney Hampton from Georgia. “I remember Emmitt Smith as a great competitor and incredible athlete. I believe we put him back in the Heisman race that year after the game he had against us.”

While Reese played on teams that won very few games, he fondly remembers his days as a Commodore gridiron star. “We could play with most SEC teams for three quarters, but we didn’t have the depth of the other schools,” he said.

By his senior year, Reese had become a shutdown defensive back who attracted the attention of pro scouts. He played in the prestigious Blue-Gray all-star game and attended the NFL combine in 1990. Many–including Reese–thought his name would be called on draft day.

It wasn’t, and that devastated Reese. “It was traumatic for me, as I was socialized to believing I was the best,” he said. After he didn’t make the NFL, it became difficult for Reese in Nashville, as people continually asked him about not making the pros.

Fortunately, Reese acquired the tools to succeed beyond the football field as a student-athlete at Vanderbilt University. During his five years in Nashville, he earned not only his undergraduate degree but also a master’s degree in public policy studies. He learned the value of education from his parents, as his mother served as a secondary school principal and his father was one of the first African-American sportswriters at a major newspaper.

Still, Reese left Nashville and moved to Seattle, needing a change of scenery after the draft disappointment. He even slept in his car and played the saxophone on the street for a time in Seattle before moving to Los Angeles to enroll at USC.

“I chose USC, as its doctoral program was one of the best in the country. It was in Los Angeles right after the riots. I knew Los Angeles would become my laboratory.”

Reese turned his energies to even more education and success in academia. “I took the intensity from the football field and turned it into something else,” he said.

While at USC, he developed the Colorful Flags program as a possible path to alleviating racial tensions in the community. “A professor told me: `This program is brilliantly simple.’ It gave me a chance to create a type of platform for me to develop certain communicative skills and allowed me to become savvy at how to implement a social program that can impact lives.”

Reese later authored books that changed lives, such as American Paradox: Young Black Men (2004), Prison Race (2006) and American Bravado (2007). In American Paradox, Reese examined African-American youth by interviewing nearly 800 young men in Los Angeles and Atlanta. He warned that young African-American males must resist a gangsta-thug mentality and false bravado that leads to counterproductive lives. “I’ve had people write me from prison, saying the book has changed the way they look at life,” he said.

Reflecting on his collegiate athletic career, Reese has no regrets. “We won 1.2 games a year when I was at Vanderbilt, and we had more downs than ups, but I wouldn’t trade it for the world and would do it all over again. We knew we were special, that playing football was a means to an end. We knew we were part of an elite cadre of individuals that had developed special bonds at Vanderbilt.”

Reese knows that his path to becoming “an ambassador for positive social change” would not be possible without his Vanderbilt experience.

“I am so thankful for the rich learning environment at Vanderbilt and my SEC experiences. While I garnered no bowl rings, I’m very grateful to Vanderbilt, its professors and coaches for laying the foundations for me to succeed later in life.”