NASHVILLE, Tenn. — It may be a bit surprising to the outsider. But not to the Commodores.

“After the Ole Miss loss there was a reality of, ‘We’re playing really well, but every now and then we’re shooting ourselves in the foot,’ ” Vanderbilt head coach Darren Ambrose said. “ ‘And this is a clean start. We’re going down to the tournament and we know what we’re capable of. Let’s go down and have some fun, let’s enjoy it.’ ”

Oh, Vanderbilt is certainly having fun.

On Sunday, the Dores will play for a championship when they meet Arkansas in the SEC Tournament final. They enter the fray having outscored their opponents 11-3 thus far in Orange Beach, Alabama.

Kickoff is scheduled for 1 p.m. on the SEC Network.

Seven different Vandy players have scored in the postseason for a team that only netted 11 goals in eight regular-season matches during the regular 2020 season.

There hasn’t been a major tactical shift or overhaul of personnel playing time. Just something about a change of scenery and a program rising to the level of play that has been there all along.

“You get down here and pull up and it’s 75 degrees and sunny and they’re all by the beach. You felt all of the stress melt away a little bit,” Ambrose said. “Just a change of environment I think we all benefited from it – just emotionally and psychologically they all benefited from it.

“All that has allowed the team that is in them to come out. Dealing with so many other things in a tough time, I think this was kind of a fresh start. As soon as we kicked off (the first game) against Mississippi State I could see – they could see – that we felt it. Training had been pretty good, but things fell into place and we certainly have not looked back since.” 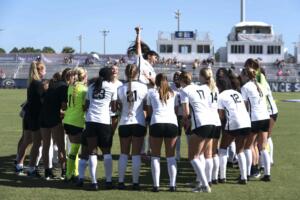 On Sunday, Vandy may have gotten the symbolic break it needed it set the wheels of fate in motion.

Mississippi State’s own goal in the ninth minute put the Commodores ahead 1-0 in their second-round matchup. Vandy has been unstoppable ever since.

Abi Brighton, Sophia Gorski and Madison Elwell all went on to score in that affair (Brighton’s goal made national highlights) and then Elwell, Leila Azari, Kimya Raietparvar and Raegan Kelley found the back of the net in a quarterfinal win over rival Tennessee.

Then, on Thursday, prolific scorer Haley Hopkins found the back of the net twice for her 31st and 32nd career goals in the semifinal against Texas A&M. Kelley provided a little insurance with an 81st-minute score that secured Vandy’s spot in the title game.

It has all come together for the Commodores at just the right time.

“We’ve talked about doing the things that we do and doing them consistently well,” Ambrose said. “We started this year very injured trying to play the same system and we couldn’t really do it very well because of the lack of depth and the lack of experience we needed in certain roles.

“So we changed our system to compensate and that was a kickstart into putting together the wins we put together. And then through that period of time we also got everybody kind of healthy. We felt good enough about changing our system and we came back to what we’re pretty comfortable with.”

Nashville’s soccer family and all of Commodore Nation will be watching.

“The feedback and outreach from alumni to soccer alumni to the soccer community has been so incredibly positive and overwhelming and it’s been really cool to see,” Ambrose said. “Hopefully we can give everyone something to shout about again Sunday.”

• Vanderbilt is the fifth team seeded 7 or lower to ever reach the SEC Tournament final.

• Ambrose had one win over Texas A&M entering Thursday’s match in his time on West End. He has one victory over Arkansas thus far entering Sunday’s match.

• The last seven seed to make the SEC Tournament final was LSU in 2018 – the Tigers defeated Arkansas in penalty kicks.

• Arkansas has now played in five consecutive SEC title games from 2016-20. It has not yet won in the championship game.