Dores in Fourth After Two at Tiger Invitational

Commodores to play final 18 on Tuesday

OPELIKA, Ala. — Vanderbilt put together two solids round of golf Monday during a long day at the Tiger Invitational.

The Commodores, tied for fourth place, played 36 holes at the Grand National Lake Course and are 10-under-par with 18 holes to go. They sit 10 strokes back of leader Auburn and will try to cut into the lead during Tuesday’s final round starting at 9 a.m.

“It was a long day out there today,” Vanderbilt head coach Scott Limbaugh said. “We tried to get as much golf as we could in today because of the storms in the forecast the next two days. I’m really proud of how our guys competed. I think we are getting better and we did a lot of good things all day long.”

Harrison Ott set the pace for Vandy with a 3-under-par. The senior is eight stroke backs of Georgia’s Davis Thompson (-11) for the individual lead.

William Moll and Reid Davenport each finished 2-under-par and are tied for 23rd while Cole Sherwood (+2) is tied for 44th and Matthew Riedel (+6) is tied for 70th. Riedel shot a 69 during Monday’s second round.

Michael Shears, playing as an individual, shot a 1-under-par 71 and is tied for 30th after 36 holes. 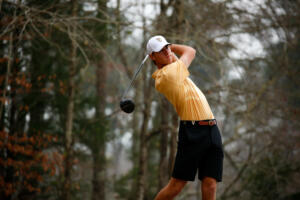 “Harrison continues to make strides which is exciting for us and William and Reid were steady all day. I do think we can be better if we continue to learn how to focus the most when it is the hardest to do that,” Limbaugh said. “It was a long day and we lost a little focus at the end and that’s not good enough for us. You always have an opportunity to train your brain and today was another chance to do that.

“I think we learned some good things and also know we can improve on some as well.”

Vanderbilt got off to a promising start Monday with a 6-under-par, 282 as a team which put the Commodores in a tie for third and six strokes back of leader Alabama. Ott (-3), Davenport (-2), Shears (-2) and Moll (-1) were all under par through 18 holes.

Ott was tied for eighth after one round and five shots back of Alabama’s Wilson Furr for the individual lead.

“I’m really excited to see what we can do in the final round,” Limbaugh said. “I like this group a lot and I want to see them go compete to our standards and do it with courage, energy and pride.”

Live scoring for Tuesday’s third and final round can be found HERE.