NASHVILLE, Tenn. — The Vanderbilt men’s golf team lifted the curtain Monday on an exciting and challenging schedule, a slate consisting of 10 regular-season events designed to challenge the Commodores each time out on the course.

“Our schedule will once again give our student-athletes the opportunity to play against the best competition on some of the best golf courses in the world,” Vanderbilt head coach Scott Limbaugh said. “When you choose to play at Vandy, you are choosing excellence in everything and our schedule is a huge part of that.

“As always, we’ve added a few new tournaments to our schedule and there are some regulars that we hope will always be there. We are thankful to have these type of opportunities for our guys. We are very excited about the upcoming season and looking forward to seeing what type of team we can become.” 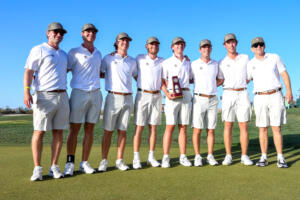 Vanderbilt will begin the 2022-23 season by playing host to the Frederica Cup. The Commodores will be one of eight teams competing Sept. 7-8 at the Frederica Golf Cub on Saint Simons Island, Georgia.

Oklahoma was ranked the No. 1 team in the country for much of the 2021-22 season and Texas Tech’s Ludvig Aberg is considered one of the world’s top amateur golfers. The Frederica Cup is a 54-hole event over two days.

“It’s exciting to be able to start a new event at a place as special as Frederica,” Limbaugh said. “We’ve had a great time with this group of teams and coaches and it was important to us to find a place that really wants to embrace who we are as a group.

“We have certainly found that in the membership and ownership of Frederica and this will continue to give all our student-athletes an opportunity to play against the best competition on a championship course.”

Vandy will next head to Birmingham, Alabama, to take part in the three-day SEC Fall Preview (Sept. 25-27) at the Old Overton Golf Club. That event will consist of 36 holes of stroke play the first day followed by 18 holes of stroke play the second day. The final day of competition will feature match play with the bracket set based upon each team’s respective finish in stroke play.

The month of October features two tournaments starting with the Ben Hogan Collegiate Invitational (Oct. 3-4) in Fort Worth, Texas, at the Colonial Country Club. Vandy will then head to the renowned East Lake Cup. Vanderbilt qualified for that tournament by virtue of its participation in the 2022 Final Four at the NCAA Championships in Scottsdale, Arizona, in May.

Played at the East Lake Golf Club in Atlanta, the East Lake Cup features one round of stroke play followed by two days of match play competition and is televised live on the GOLF Channel.

Vandy opens the spring schedule Feb. 5-6 in Ponte Vedra, Florida, at the John Hayt Intercollegiate played at the Sawgrass Country Club. Next, the Dores will head to the Watersound Challenge (Feb. 19-21) at the Shark’s Tooth Golf Club in Panama City Beach, Florida. 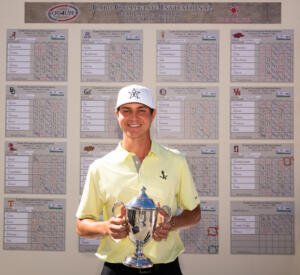 Vanderbilt will return to the Linger Longer Invitational (March 19-21) in Georgia, an event they finished second in last season, and then head to the Calusa Cup (April 2-4) in Naples, Florida, at the Calusa Pines Golf Club. Vandy ends the regular-season by hosting the Mason Rudolph Championship on April 10-12.

The Commodores return four of the five participants from last season’s team — including sophomore Gordon Sargent who won the NCAA individual championship — which reached the semifinals of the NCAA team championship. The 2021 and 2022 SEC champions will go for a third consecutive conference title April 19-23 on Saint Simons Island at the SEC Championships. 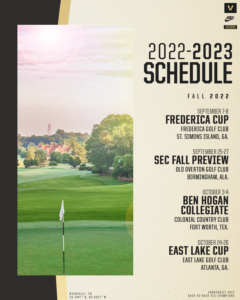 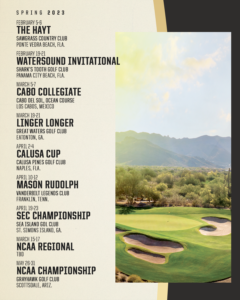