Culley was recruited to play at Vanderbilt University by Bill Parcells, who was the defensive coordinator there at the time. He was a four-year letter winner (1973, 1975-77) and the first Black quarterback ever to play for the Commodores.

Culley owns 27 years of NFL coaching experience and 43 overall seasons in coaching after a 16-year career on the collegiate level. As an NFL coach, Culley has captured 10 division titles, made the playoffs in 17 different seasons and appeared in six conference championship games. 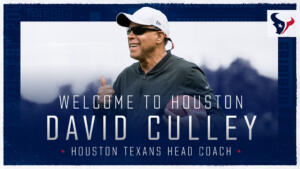 “Throughout his entire coaching career, David has shown an ability to lead and bring people together,” Texans Chairman and Chief Executive Officer Cal McNair said in a release. “David brings a wealth of experience and knowledge to our team as somebody who has seen it all in this league.

“In his more than 40 years of coaching, David has learned from many of the best coaches in the NFL while helping players navigate both the physical and mental side of the game. Highly regarded individuals from all over the league reached out to us throughout this process in support of David because of his unique ability to connect with those around him and his passion for the game and the relationships he creates. During our meetings with David, it was evident he has the energy, communication skills and vision required to build a winning program. We are thrilled to welcome David, Carolyn and the Culley family to the Houston Texans.”

Said Texans General Manager Nick Caserio: “Heading into this process, it was imperative to find a head coach that our entire organization could rally behind and David is unquestionably that leader. David’s infectious energy, passion for the game and ability to command a room was clear from the start. As he shared his vision for how a head coach should lead a football team, it further solidified our belief in him.

“His mentality of being selfless and willing to accept any challenge while investing in each person within our program resonated with all of us. I could not be more excited to welcome David Culley and his family to Houston as the next head coach of the Texans.”

Said Culley: “On behalf of my family, I would like to thank Janice, Cal and Hannah McNair for the amazing opportunity of being the next head coach of the Houston Texans. To say that I am excited and that this is a dream come true is an understatement.

“Along the way, I have had countless people, organizations, family members and friends pour into me and prepare a path for me. My genuine hope is that this moment is as much theirs as it is mine. Let’s get to work and let’s do it together!”

As the Ravens assistant head coach/pass coordinator/wide receivers coach from 2019-20, Culley helped the offense by creating a passing scheme that complemented the team’s dynamic rushing attack. In 2020, Baltimore posted the seventh-most points per game (29.3) in the league, despite numerous key players in and out of the lineup.

The Ravens offense was instrumental in closing out the season on a five-game winning streak to make the playoffs, averaging 37.2 points per game during that time span. His work with the Ravens offense in 2019 saw them lead the NFL in scoring at 33.2 points per game. The unit also ranked second in total yards per game (407.6), while setting franchise records for touchdowns (64), points (531), total net yards (6,521), rushing yards (3,296), first downs (386) and fewest turnovers (15). 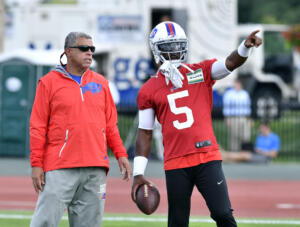 Prior to joining the Ravens, Culley spent 2017-18 as the quarterbacks coach for the Bills. In 2018, he helped develop QB Josh Allen, who posted the franchise record for the most total touchdowns (18) produced by a Bills rookie quarterback.

Culley also worked with quarterback Tyrod Taylor in 2017 when he passed for 2,799 yards and 14 touchdowns, as he led Buffalo to a 9-7 season and the franchise’s first playoff berth since 1999.

Culley served as the assistant head coach/wide receivers coach with the Chiefs under Andy Reid from 2013-16, where he helped the team notch a cumulative record of 43-21. In 2016, Culley guided star rookie wide receiver Tyreek Hill to 61 catches for 593 yards and a team-high six touchdowns, en route to Kansas City’s 12-4 record and a division title.

The season prior, wide receiver Jeremy Maclin totaled 1,088 receiving yards in his first year with the team and set a single-season franchise record for the most receptions (87) by a wideout. In 2013, the team won at least 11 games for the first time since 2003.

Culley spent 14 seasons with the Eagles (1999-2012) as the wide receivers coach from 1999-2010 and as a senior offensive assistant/wide receivers coach in 2011-12. During his tenure, Philadelphia made nine playoff appearances, advancing to five NFC Championship games and one Super Bowl (2004).

Culley developed wide receiver Jeremy Maclin with the Eagles, and in his first three seasons (2009-11) with Philadelphia, Maclin caught more passes (189) than any other wide receiver in franchise history. In 2009-10, the Eagles made the playoffs in consecutive years and won the NFC East Division in 2010. Culley worked closely with WR DeSean Jackson during those seasons and helped him earn the first two Pro Bowl selections of his career.

From 1999-2008, Culley and the Eagles won the NFC East Division five times and made the NFC Championship Game on five different occasions. Under Culley’s coaching in 2004, wide receiver Terrell Owens earned First-Team All-Pro honors when he posted 77 receptions for 1,200 yards and a franchise-record 14 receiving touchdowns.

Philadelphia would go on to advance to Super Bowl XXXIX against New England behind Owens’ tremendous season. In 2002, the Eagles offense ranked fourth in the NFL in points per game (25.9) and WR Todd Pinkston tallied a team-high seven touchdown receptions. From 2000-04, Philadelphia won 59 regular season games, which remains the most in any five-year span in franchise history.

Culley was hired as the Steelers wide receivers coach in 1996 and spent three seasons (1996-98) in that role with the team. In 1997, he assisted wide receiver Yancey Thigpen in his Pro Bowl season when he logged a career-high 1,398 receiving yards and seven touchdowns as Pittsburgh went 11-5 and won the division.

Culley came to the Steelers after working the previous two years (1994-95) with the Buccaneers as the wide receivers coach. 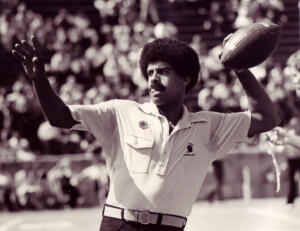 During his time as the quarterbacks coach at Southwestern Louisiana (1985-88), Culley coached Brian Mitchell, who became the first player in NCAA history to pass for more than 5,000 yards and rush for more than 3,000 yards in a career.