Continuing to Set The Expectation

NASHVILLE, Tenn. – For the second consecutive season, the Vanderbilt football team is holding a “Set The Expectation” game.

The Commodores host Ole Miss at 3 p.m. Saturday for this season’s event. During the 2019 season opener, Vandy became the first SEC program to host a “Set The Expectation” game.

The event originated in June of 2019 when Brenda Tracy, a registered nurse from Portland, Oregon, shared with the football team her devastating personal story and vital message of preventing sexual violence.

Tracy, who spoke with the team again this fall, also serves on the NCAA’s Commission to Combat Campus Sexual Violence. Her talk to the Commodores earlier this month was her first time presenting her story over Zoom. 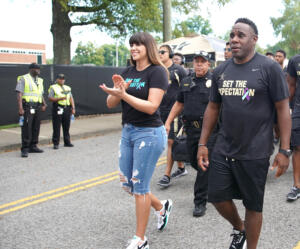 Tracy, who calls her campaign “Set The Expectation,” was in attendance and introduced to the crowd during an on-field recognition during the 2019 tilt against Georgia.

“When we started that game (in 2019) we were the first SEC school to participate in the ‘Set The Expectation’ game,” Vanderbilt head coach Derek Mason said. “We want to model and bring some awareness to exactly what the issues are.”

Vanderbilt Athletics recently announced several new measures to support efforts to address and prevent sexual assault and sexual misconduct, including expanding its partnerships with Project Safe, Title IX and the University Counseling Center and creating a mentorship program that will include alumni and support student development.

Vanderbilt Athletics continues to clearly communicate the University’s values and expectations under Title IX throughout the department and provide education and resources.