Vandy finding its starting five for the offensive line

NASHVILLE, Tenn. — It’s no secret that if the Vanderbilt offense is to have significant success in 2022 much of the onus falls on the offensive line.

Under the direction of second-year offensive line coach AJ Blazek, the Commodores up front have not only been battling this preseason to start Aug. 27 at Hawai’i, but to prove they can be counted on week-in and week-out to help propel the offense as a whole to new heights.

“I’ve been excited all summer to work with these guys,” Blazek said. “They put so much work in this spring and summer, the time they’ve invested and in their extra time and the stuff they’ve done with (director of strength and conditioning Brandon) Hourigan and his staff in the weight room, it’s been fun to watch them and it has been exciting to get to camp.” 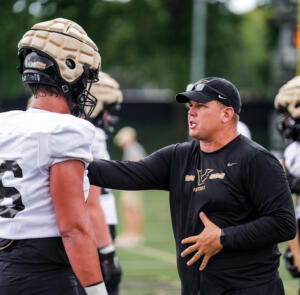 Blazek has looked to three upperclassmen to lead the charge into the 2022 campaign. Senior Julian Hernandez has been lining up at center with the first-team offense and juniors Bradley Ashmore and Ben Cox have been at right tackle and left guard, respectively, with the starters.

Sophomore Gunnar Hansen has the inside track to start at left tackle while sophomore Delfin Castillo has been positioned at right guard.

“A lot of the young guys that played early last year, that had to play, have taken that next step. Then the older guys, football has really slowed down for them,” Blazek said. “The older guys, if you have two or three of them in there that have played enough that connect all the dots, you have a chance to play well.

“The older guys are connecting some dots, the younger guys are bringing some liveliness and energy and juice. When you’re in a program that is trying to rebuild, and you’ve been here for a while, some times that’s hard to keep going. The young guys provide a lot of life in that room right now.”

Behind the aforementioned five are some options that should also be involved in the first-team rotation. Fifth-year seniors Junior Uzebu and Jacob Brammer (a North Texas transfer) have been competing at the tackle spots and sophomore Gage Pitchford has been competing at guard. 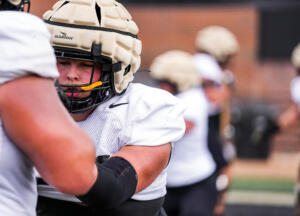 Blazek said because of the versatility of Ashmore, Brammer and Castillo on the right side of the line, it’s possible that trio all plays at some point during the same game. Head coach Clark Lea, meanwhile, said he has witnessed a group that has practiced with an identity of toughness and finishing.

“Over the next couple of weeks the first five will separate themselves. I think on the whole we still have eight guys that we’re looking at right now that could be a part of that,” Lea said. “We’re pleased with the young part of that unit and how they’re coming along and competing.

“I see a group that’s stepping in to a physical identity, that’s playing more of a collective unit and that gives us a chance to be affective. We need elevated play from that group because, obviously, we’re in the SEC and the games are won in the SEC in the trenches.”