John Williamson named Coach of the Year; Mabel Cummins an All-American; Paige Peters the national Newcomer of the Year

COLUMBUS, Ohio — Vanderbilt’s Paige Peters and Mabel Cummins along with head coach John Williamson were honored by the National Ten Pin Coaches Association Thursday night on the eve of the NCAA bowling championship.

Peters was named the national Rookie of the Year and also chosen for the All-America third team while Cummins was selected to the All-America second team for the second consecutive year. Williamson was recognized as a co-recipient of the NTCA’s Division I Coach of the Year.

The announcements were made at the NCAA Bowling Recognition Dinner.

Peters, a freshman from Tom’s River, New Jersey, was a unanimous choice of the 42 head coach voters for the honor and becomes Vanderbilt’s seventh Rookie of the Year. She was the only freshman chosen for one of the three All-America teams.

Peters had a breakout year, quickly earning a place in Vanderbilt’s starting rotation. She was the Most Valuable Player at the 19-team Northeast Classic and made three other all-tournament teams during the season. She was ranked among the nation’s top 15 individuals in 17 statistical categories.

Cummins has been outstanding throughout her Vanderbilt career. After shining in the anchor position in the rotation for a year and a half, she was moved into the lead-off spot with the emergence of Peters and the importance of getting the team off to successful starts.

Cummins had a banner individual season, highlighted by winning the Most Valuable Player award when her team won the Southland Bowling League championship. Cummins, a junior from Hermitage, Tennessee, was a model of consistency while being named to four all-tournament teams for her top-five finishes.

She was the Southland’s Bowler of the Month in January. Like Peters, she was ranked among the national leaders in nearly 20 stat categories, including leading the country in lead off strike percentage.

Williamson was honored along with Tom Falbo of Morgan State and Amber Lempke of Stephen F. Austin after a unique three-way tie in voting by their fellow head coaches. Williamson guided the Commodores to their second consecutive Southland Bowling League championship, a Final Four berth and a 92-39 record, improving his 18 year career won-loss record to 1,409-652. He previously was national coach of the year in 2007 and 2019.

Both Cummins and Peters deflected their recognition to include their teammates.

“It’s awesome that both Paige and I were recognized for our hard work,” Cummins said. “There are a couple of other people on our team that contributed greatly and if there was a team award I think we would get win it.”

Said Peters: “I feel honored to have been selected and join some of the greatest bowlers in our program’s history. There are a lot of very good bowlers in Division I — so many girls that have such great talent. It makes me want to work harder to keep getting better.”

Williamson wanted to thank the people that made his award possible.

“We have a selfless group of players that work hard to contribute in any and every way possible,” he said. “And we are fortunate to have one of the very best coaches in the country in Josie Barnes wearing our colors. The combination of great players and a gifted coaching partner made this award happen.” 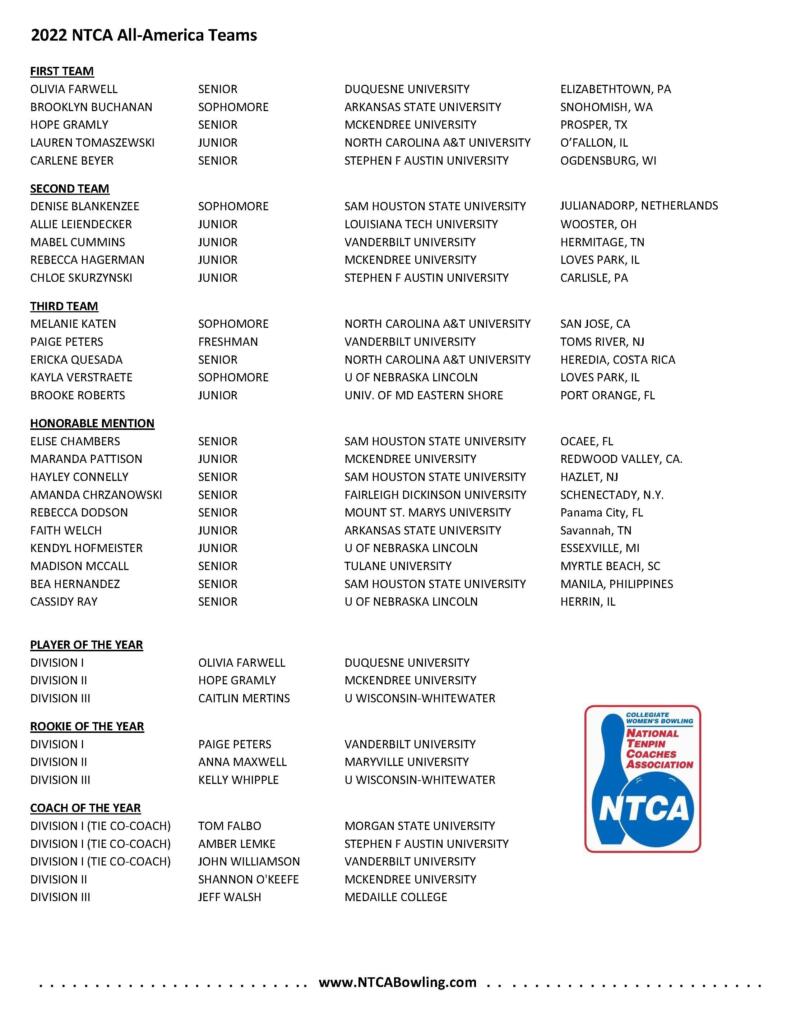