NASHVILLE, Tenn. — Against the backdrop of social change in America, a group of Black student-athletes, Taiya Shelby, Elijah McAllister, Olivia Simmons and Cam Robinson, have come together to take action, focusing on improving the Black student-athlete experience at Vanderbilt, among other issues.

One of their first acts was to help organize a voter registration drive on Tuesday, Sept. 22, from 11 a.m. to 6 p.m. at Vanderbilt Stadium. The event is one of several campus efforts planned to encourage voter engagement.

Also among the students’ goals are to create a safe and comfortable space for Black student-athletes, provide a formal support system to offer the necessary actions and conversations to improve the social experience of Black student-athletes at Vanderbilt, work to address racial issues in sports and offer guidance toward professional development and personal growth.

“Our skin color is not a uniform. We can’t take it off. At the end of the day we’re always going to be Black. We won’t always be students and we won’t be athletes forever. I want to make sure everyone is adhering to that unity before anything.” 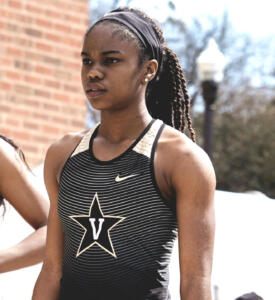 The group also aims to make sure every Black student-athlete feels the support of their community and has all the necessary tools to be successful.

“I feel like it was time for us to stop raising awareness and bringing attention to and reaching out with thoughts and prayers to actually putting some of what we were saying into action,” Robinson, a senior defensive lineman for the Vanderbilt football team, said. “I was tired of talking about it – I wanted to be about it.”

A three-day event in January at the University of Texas, the Black Student-Athlete Summit, motivated Shelby and McAllister to be change agents in their community. It was there that they met student-athletes from around the country, participated in workshops and discussions, and heard from guest speakers like journalist Jemele Hill.

Shelby said she and McAllister returned to Nashville determined to mirror similar efforts on other college campuses.

Being at the center of these efforts was something Shelby says she likely would have never even considered, but she cited a recent moment when a prospective student asked her what it was like to be a Black student-athlete at Vanderbilt as another motivation.

“I couldn’t give her a good answer – which was sad for me,” Shelby said. “I wanted it to be a different experience going forward where I can say this is what it’s like to be a Black student-athlete at Vanderbilt and here’s why and show all this stuff we’re doing and who we are.” 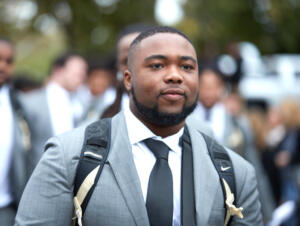 Robinson, who was born and raised in Mobile, Alabama, stressed that his experiences have been shaped by growing up in the shadow of the not-too-distant Civil Rights Movement and being exposed to racism as early as the age of five.

When Robinson and his family moved to Saraland, a Mobile suburb, he remembers being the lone Black child in his kindergarten class. He remembers even more witnessing white supremacy rallies nearby, the letters KKK spray painted on his home and the windows of his house being broken.

Robinson feels strongly that Vanderbilt gives him the platform to be part of something he believes in and he speaks with pride when citing Vanderbilt trailblazers Perry Wallace, David Williams and Candice Storey Lee.

“I feel passionate about it because I feel like with everything going on right now, it was thrust upon us to make this happen. I don’t think that it was just some coincidence,” he said. “I feel like with all the social justice issues that we’re seeing in America, with this being a pivotal (presidential) election, I feel like this was the perfect time. The stars are aligning.

“When they say it’s the Vanderbilt Way – I honestly do feel like that’s just how we do things here. We set the precedent for everyone else.”