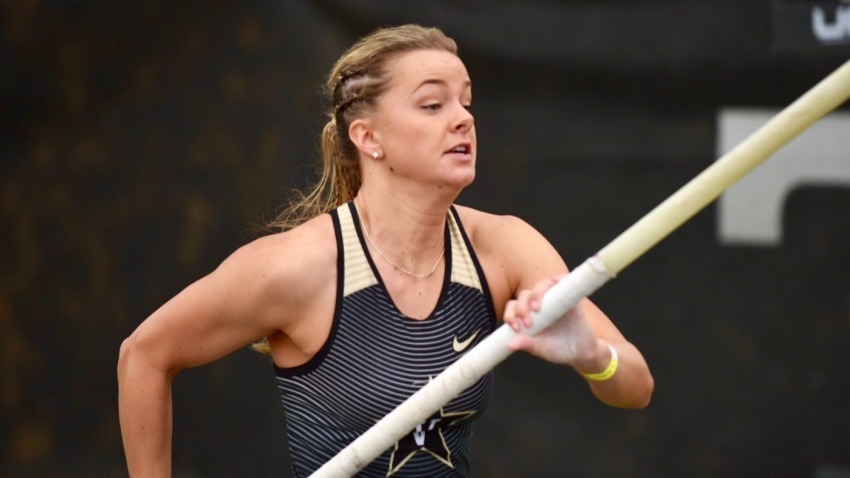 Clayton, a senior coming back from injury, fought to a fourth-place finish in the 800-meter run while Denk, a redshirt sophomore, produced a fifth-place result in the pole vault.

Sprinter Jenn Edobi also contributed team points for the Commodores with an eighth-place finish in the 400 meters.

Vanderbilt head coach Steve Keith was proud of the team’s individual performances, even though the Commodores finished with a total of 10 team points.

“I thought we competed really well in virtually every event where we had athletes entered,” Keith said. “I thought Courtney, Kristen and Jenn showed a lot of competitiveness and we had several others like Sophia, Caleigh and Sara produce their best performances of the season. That’s what you want to see at such a tough meet at the SEC Championship.”

Clayton, an All-American and All-SEC performer last year, was making just her fourth appearance of the outdoor season at the SEC meet. She kept close contact with the Texas A&M duo of Smmy Watson and Jazmine Fray and Ole Miss’ Maddie McHugh through the opening quarter mile, then out-fought Brittany Parker of Texas A&M at the wire to claim fourth place.

Clayton, who holds the Vanderbilt 800-meter record of 2:04.12, is likely to next appear at the NCAA East Regionals, scheduled later this month in Tampa where she will look to qualify for her second straight appearance at the NCAA Championships.

Denk was superb competing on UT’s Tom Black Track. Despite an early miss in the pole vault competition, Denk made a first-attempt clearance of 13-11.25 (4.25 meters) to claim fifth place. The team’s outdoor record holder at 14-1.25, Denk made three unsuccessful attempts at 14-3.25. Denk’s sophomore teammate Caleigh Lofstead also tied a personal record in the event with a clearance of 13-3.50 (4.05 meters), good for 12th place.

Tsai, a former All-SEC cross country standout, threatened to earn team points in her first collegiate attempt in the 5,000-meter run. She finished the race 11th among 52 runners with a clocking of 16:57.96.

Falco, a freshman jumper/sprinter, closed out a superb SEC meet by producing a collegiate-best effort in the triple jump. She becomes the No. 2 triple jumper in team history after leaping 40-9.50 (12.43 meters).

An injured foot hindered sophomore Reagan Bustamante from contending in the 1,500-meter run. After easily qualifying for the final, Bustamante could only finish claim 12th place with a time of 4:39.66.