Horton was named Third Team All-America by INS following a superb 1955 season in which he established a then-school mark of 12 touchdowns.

Horton’s outstanding play at halfback propelled the Commodores to an 8-3 season and their first ever bowl game – a 25-13 win over No. 8 Auburn in the Gator Bowl. 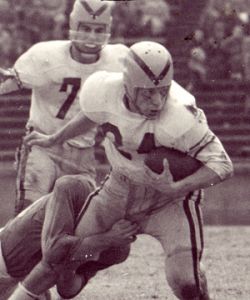 Horton had a knack for getting the Commodores on the scoreboard, as he scored the first touchdown in seven of the 10 regular season contests in the 1955 season.

Horton was an outstanding returner for the Commodores. He ranks second all-time with a 14.4-yard punt return average.

Though selected 11th overall by the Rams in the 1956 draft, Horton joined the military. After completing his service, Horton played in 1959 season with the CFL’s Toronto Argonauts.