Someone so good at making things happen on the court suddenly had little control over her future.

“That was my last hope,” Cambridge said. “I was like, ‘This has to go well, and I have to recover from this or I’m done. There’s just no way I’m going to be able to keep playing.’

“That was obviously a very scary time for me. But I pushed through it.”

After two major knee surgeries, a joint disorder, a season lost to the COVID-19 pandemic and a coaching change, Cambridge is still playing basketball–and playing at a high level at the start of her senior season. She has come out of tumultuous times stronger and with a new mindset molded by adversity.

The Long and Uncertain Road

Cambridge tore the anterior cruciate ligament and lateral meniscus in her right knee during an AAU tournament following her junior year in high school. She underwent surgery and immediately began working hard to return from an unfortunate but not uncommon injury.

But something wasn’t quite right. Cambridge knew that her right knee wasn’t in the same shape it had been before. In December of her senior year at Nashville’s Ensworth School, she met with Sullivan to discuss her options.

“After surgery I wasn’t healing properly,” Cambridge said. “I was having to have a manipulation done where they basically put me to sleep and tried to help me get range of motion in both directions. That helped me get a little bit of range, but it really didn’t work too well.”

Cambridge said Sullivan opted to remove as much scar tissue as possible, which helped her regain greater range of motion. Prior to that, she struggled to walk comfortably, let alone play basketball. She learned her slow recovery was the result of arthrofibrosis, a joint disorder that in rare cases can appear as a complication following ACL surgery. 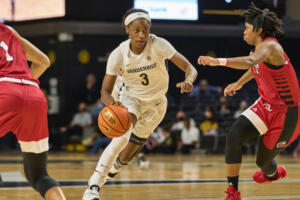 Cambridge recovered well enough to finally make her Vanderbilt debut Nov. 6, 2018 against North Alabama. She would go on to play 23 more games her freshman season, averaging 15 minutes and a modest 3.3 points per game.

That experience set her up for a breakout sophomore season.

Cambridge became the first Commodore to total at least 100 assists and 80 steals in a season since Jade Huntington in 1989-90. A starter in all 30 games, she was named to the SEC’s All-Defensive team.

But the ending to that season may be the most lasting memory for Cambridge.

During the second quarter of a game against Auburn in the SEC Tournament, Cambridge broke away for a layup and was fouled hard. She came down awkwardly on her left knee and immediately crumpled to the ground.

Cambridge had torn the ACL in her left knee.

“I was actually terrified because in my head I thought I was going to go through the same thing with my left knee that I did with my right knee,” Cambridge said of her experience with arthrofibrosis. “I was so terrified that was going to happen again because that’s just how the doctors said my body heals, that scar tissue gives up really fast.”

All of this happened as the country grappled with the early days of the COVID-19 pandemic. Surgery delayed, Cambridge rehabbed and tried to build quad strength for the rehab challenge ahead.

Following surgery, doctors and trainers assured her that her recovery was going well. But it wasn’t until Dr. Sullivan told her she was “killing it” at the six-month check-in that she breathed easy.

“It made me cry a little bit because it was the first time I had gotten really good news from my doctor,” Cambridge said.

She had just been cleared to return to the court when the women’s basketball team elected not to complete the remainder of the 2020-21 season due to COVID-19-related circumstances.

When Ashley Earley joined Vanderbilt’s coaching staff for the first time in 2013, one of her main tasks was targeting local prospects. She quickly came across Cambridge, one of Tennessee’s top young guards. 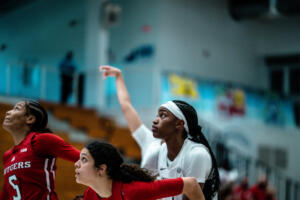 “She was quick as lightning, she had the genes from her dad [former college guard Desmond Cambridge], and we had made a point we wanted to keep local talent home,” Earley said. “It’s funny how a leader – their energy is evident early. You can tell that intangible piece of it. It’s something that you can’t really coach. She had it as a kid.”

Earley eventually departed for new gigs at Northern Kentucky and Penn State, respectively, while Cambridge prepared for a career with the Commodores. But when Vanderbilt named Shea Ralph coach this past April, Earley and Cambridge soon found out they would be reunited.

“I’m a firm believer that things happen for a reason,” Earley said. “As soon as I got the job, I remember going out there on social media and Jordyn was one of the first to reach back out and repost the news. She mentioned how things come full circle and what is supposed to happen will happen.

“She’s been such a joy to coach. I’m so fortunate to be here for her senior year because that person and player we knew even back then in middle school that she could be? She’s 100 percent developing into that person. We’re just so proud of her.”

In no way is Cambridge taking anything for granted.

While she suspects her teammates may moan at the thought at having to run another sprint or be exhausted at the repetition of running a set until it’s perfected, the 5-foot-9 guard relishes each moment on the court. That’s not surprising to her new head coach, who went through multiple knee surgeries during her playing career.

“She’s one of, if not the, hardest working players,” Ralph said. “I had several knee injuries, too, and that’s just kind of the hallmark of a kid that has to fight to be on the floor. When you have something that you love taken from you, and you can’t do it for a long time, I think you really value the time that you get to do it.

“You can see that in Jordyn. She’s matured as a basketball player. I couldn’t be happier to have her on the team. She’s a great kid. She’s a great leader. She works her butt off to be able to play the game that she loves. So every day that she gets is a gift to her, but it’s also a gift to our team because she makes us better. She’s a wonderful leader, and we’re thrilled that she’s healthy and hopefully will stay that way for the rest of the season.” 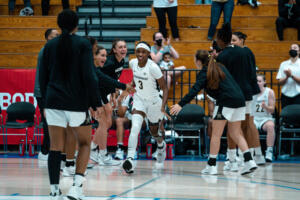 Through eight games this season, Cambridge appears to finally be playing like her old self.

She was named to the All-Tournament team at the Paradise Jam in the U.S. Virgin Islands after averaging 12 points, four rebounds, four steals and 2.3 assists over three matchups. For the season, ahead of Tuesday’s matchup with Chattanooga at Memorial Gymnasium, the heady guard is scoring 10.1 points, 5.5 rebounds and 3.1 assists and three steals per contest.

And while Cambridge and her coach are stoked to see those numbers fill up the stat sheet, their conversations off the court focus more on the bigger picture and how a tumultuous recent past has set Cambridge up for a bright future.

“That’s what has really turned me into the person that I am. My time away from basketball has made me work on small things and not take life and basketball for granted because you never know what can happen.”

A human and organizational development major, Cambridge is on track to graduate in May. She is considering pursuing of a graduate degree and then perhaps a career in coaching.

But well before then she has unfinished business left as a Commodore. Business she’s ever-grateful to be able to take care of after being sidelined for so long.

“I want us to get better every single day,” she said of her senior season with the Commdores (4-4). “I want us to realize that it’s a process and nothing is going to happen overnight. I want to see us constantly improving – and being the best versions of ourselves.”

Pioneering student-athlete, coach and administrator reflects on her journey and returning to her alma mater to broadcast women’s basketball games this season