NASHVILLE, Tenn. — The Southeastern Conference champions are back.

Vanderbilt returns to the pitch at 3 p.m. Thursday after a three-month layoff salivating at the chance to return to its championship form and anxiously awaiting its reward of an NCAA Tournament berth.

“I think the kids are rearing to go and to have games that mean something now,” Vanderbilt head coach Darren Ambrose said. “We’re ready to build toward to the NCAA Tournament.”

Vanderbilt went 4-4-0 in the 2020 regular season, an up-and-down eight-game slate full of injuries and COVID-19 precautions that frustrated the team. But a trip to Orange Beach, Alabama, gave the Dores a fresh start and new outlook.

Fourteen goals and four wins later the Commodores were coming home with their first league tournament title since 1994. That earned them a berth into the 2021 NCAA Tournament, which was moved from November to April due to COVID-19 concerns.

The 48-team bracket is scheduled to be revealed April 18.

Before then Vandy will hope to get in four fixtures – home games with Kennesaw State, Lipscomb and Memphis and a trip to Duke. It beat Middle Tennessee 4-0 and DePaul 3-0 before battling Racing Louisville FC to a 2-1 scoreline in exhibition matches over the past three weeks. 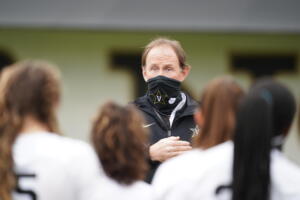 “I’m excited,” Ambrose said of his team’s form during the preseason. “We’ve come out of this with two exhibition wins, we created chances against an athletically strong and tactically superior team (Racing Louisville), we’ve battled hard and we’ve shown that we can possess the ball a little bit.”

Kennesaw State (2-5) comes to Nashville having played seven matches after its fall schedule was canceled. The Owls beat Bellarmine on Sunday, but had dropped five in a row before that.

In 2019, Kennesaw went 11-7-2 and lost in penalty kicks at Lipscomb in the Atlantic Sun Conference championship.