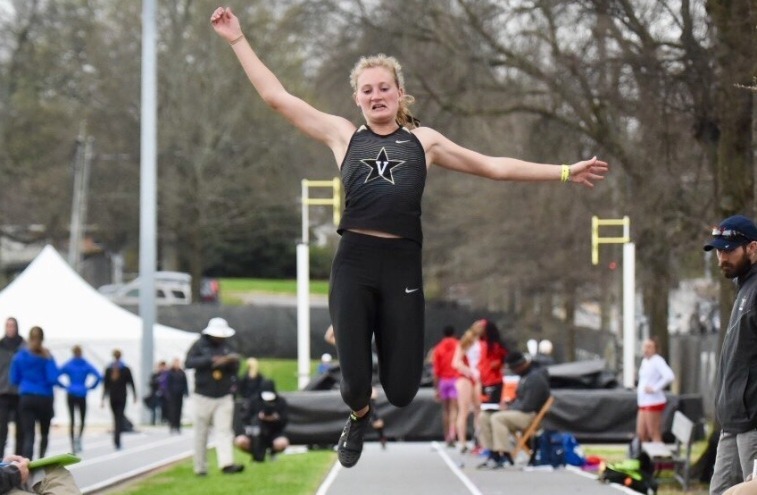 Bustamante, a sophomore from Springfield, Va., ran a 4:25.13 in the 1,500 meters to comfortably qualify for the finals on Sunday. Less than an hour later, Edobi, a junior from Union, N.J., moved on to the 400-meter dash finals by matching her season-best of 53.33.

In the last race of the Saturday schedule, sophomore Kacie Breeding narrowly missed contributing team points for the Commodores in the 3,000-meter steeplechase. She finished ninth of 14 runners with a time of 10:44.43.

“We’re competing at a high level, such as the record jump by Sophia (Falco), but just missing point production,” Keith said. “I thought Reagan (Bustamante) ran well in her 1,500 heat and I’m very happy for Jenn because she’s been training so well. I would have liked Kacie (Breeding) to get eighth in the steeplechase, but she ran a solid race and just missed a personal record.”

On Sunday, the Commodores will have 13 athletes competing in SEC finals, including nine runners and four field athletes.

Bustamante continues to impress in her second season. She became an automatic qualifier by placing third of 13 entrants in her 1,500-meter heat, trailing only Mississippi State senior Rhianwedd Price-Weimer and Florida sophomore Elisabeth Bergh.

Bustamante’s sophomore teammate Kendall Derry just missed joining her in the 1,500-meter final. With 12 advancing from the two prelims, Derry finished 13th with a time of 4:30.43. Junior Ginger Hutton and senior Maddie Criscione finished 17th and 19th in the 1,500, respectively.

Edobi was the runner-up in the second of five heats in the 400 meters, and had to wait until the last prelims finished before learning she was in the finals on Sunday. Edobi’s 53.33 performance matches her season best but is off of her career-best of 52.74 set at the NCAA regionals last year.