One of the team’s first downfield receiving threats, Curtis was selected First Team All-American by the Football Writers, INS and Look Magazine in 1950.

He ranked among the nation’s best receiving yardage in 1950. As a senior, Curtis led the team to a 7-4 record, and set a SEC mark with 791 receiving yards. 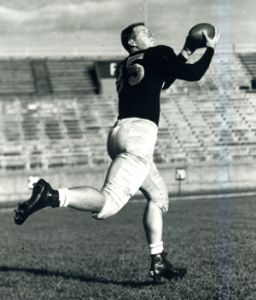 Curtis ranks fourth all-time on the team with 17 touchdown catches.

After his senior season, Curtis was named MVP of the Senior Bowl, and played in the College All-Star Game. He was selected in the second round of the NFL Draft by Cleveland.

He went on to serve four years in the Navy. Eventually, he played with Toronto of the CFL.In 1975, he received a Silver Anniversary Award by the NCAA.