MILLSBORO, Del. — For the fifth time in six years, Vanderbilt is the reigning champion of the Hawk Classic, roaring out of the loser’s bracket to turn the tables on Fairleigh Dickinson in the title game. 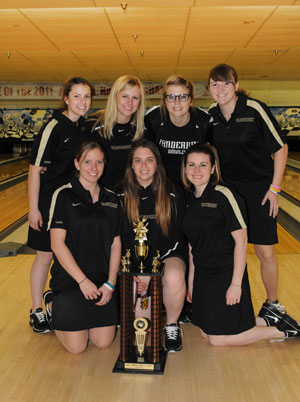 The Commodores, who earned the top seed through two tough days of bowling, once again faced second-seeded FDU in the bracket’s first match. Unlike two weeks ago when in the same scenario, Vandy won the game and got the quick ticket into the title game, this time it was the Knights that blew past the Commodores by a 4-0 margin.

Vanderbilt then had to scrap and claw against host Maryland-Eastern Shore in the semi-final bout, one it was able to win by a 4 games to 2 margin. Included in this tussle were a pair of one-pin Hawk victories as the two 2011 national finalists squared off.

Then it was back once more for the all-too-familiar finale with FDU. With new-found steam, Vanderbilt pushed past the Knights by a 4.5 – 1.5 margin to capture the championship in this 20-team event once again.

“In this format the bye seems to have a negative effect,” Coach John Williamson reasoned. “Two weeks ago we win the first match and drew the bye. It put us to sleep and we bowled poorly in the championship game. Today was the opposite. We came alive in that UMES semifinal and rode a lot of team energy through the last FDU game.”

Vanderbilt started the day with a Baker rotation of Brittni Hamilton, Sarah O’Brien, Kim Carper, Jessica Earnest and Samantha Hesley. Left-handed Natalie Goodman was inserted for Carper against UMES and Williamson was pleased with the freshman’s performance.

“I thought Natalie came in big and was involved with what may have been the day’s turning point,” Williamson noted. “Natalie had a wash-out midway through that UMES game and we brought in Nicole Mosesso for the spare and she made it. Nicole’s conversion gave us a real lift.

“Overall our performance was still not very pretty – too many miscues – but we did enough and everyone did what was needed to win,” Williamson said.

The Commodores ended the day with Hamilton, O’Brien in the second hole until tiring and giving way to Carper in the last game, Goodman, Earnest and Hesley.

Senior All-American Brittni Hamilton made the all-tournament team with her fifth place individual performance, her second all-tourney berth in as many tournaments this fall.

Vanderbilt will conclude its fall schedule in two weeks at the Sam Houston State Invitational.