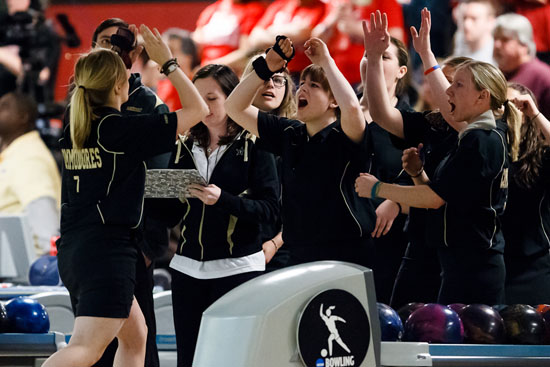 Vanderbilt will face Fairleigh Dickinson in the NCAA Championship semifinals Saturday at 11:40 a.m. CT (Watch). The winner will advance to the championship game against Maryland Eastern Shore Saturday night at 7 p.m. (televised live on ESPNU and ESPN3.com). Follow the tournament on the NCAA’s Bowling Central site.

WICKLIFFE, Ohio — Friday the 13th came and went and the Vanderbilt Commodore bowling team is still alive at the NCAA Championships. So much for bad luck.

In the sport of bowling, for those uninitiated, there is a mix of skill and luck that makes it a fascinating event to see – especially when performed at the highest of levels. Can your team work together to fill frames and string strikes across 10 treacherous frames? Can you communicate lane conditions or lift each other up when necessary? Did you run into a red-hot team that was unstoppable? Did that wobbling 7-pin topple or stay up?

Oh the things that can happen and many happened on this sun-splashed Ohio spring day to Vanderbilt’s gritty bowlers, who are one of three teams left standing in this double elimination battle royale. 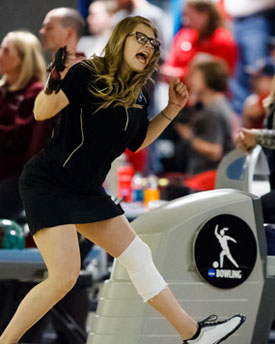 You win championships with a team, not a handful of individuals. Today Vanderbilt once again received sufficient help from an array of players. Let’s take, for instance, Sarah O’Brien.

Sarah came to Cleveland “lightly” bowled, the result of well documented hip and knee matters. She received clearance to bowl from Vanderbilt medical personnel just five weeks ago and got her feet wet three weeks back at Vandy’s home event.

On Friday the 13th, all the Illinois product did during one white-hot stretch was string 13 strikes in a row.

She was as automatic as a lumberjack taking a second piece of pie. Look up the definition of “in the zone” in the dictionary and you’ll see Sarah’s picture.

“To be honest it was kind of a blur,” O’Brien said after the wood had stopped falling. “I was just paying attention to my team and trying to do my best for the team.”

There were others as you would presume. Jessica Earnest, a three-time, second-team All-American, had one of the more quiet great days you will witness. Also an Illinois junior, Jess went through Friday’s four games with just three open frames and many times set the table for anchor Samantha Hesley to put the game away with her critical strikes and spares in the ninth frame.

A third Illinois amigo, freshman Natalie Goodman, shined in the third spot of the rotation, especially in the final game of the Arkansas State victory in which she brought the large Vanderbilt crowd to its feet with the conversion of the 3-6-7 split in the eighth frame of the close match.

“Days like this never get old,” said a drained Coach John Williamson. “They are exciting and invigorating all in one. We are in the same setting as last year and once again this afternoon we bowled the way we are capable of bowling. I thought our “Big Three” were strong and Sarah was amazing, especially considering how little she has bowled since December.”

Friday the 13th was another survival Friday for the `Dores, whose goal this year has been to reach the last day of a tournament in contention to win. They once again met that challenge.

The Commodores, who won last year’s “as needed” Saturday game to advance into the title game, will need to beat a very good Fairleigh Dickinson team in a game that will begin at 11:40 (CDT). The winner will play Maryland Eastern Shore, who didn’t have less than a 221 in six games against Vandy this morning.

“This reminds us of last year,” O’Brien said. “What kept me going today was the drive to get into the championship match. After last year we want that title.”

WICKLIFFE, Ohio — Sarah O’Brien was spectacular and Natalie Goodman converted an improbable spare in the clutch to lead Vanderbilt past Arkansas State and advance to the semifinals of the NCAA Bowling Championship Friday afternoon.

O’Brien, the seldom-played junior with the hip and knee issues, made strike after strike from her second spot in the rotation as Vanderbilt rolled up a quick 3-0 lead on the No. 1 rated Red Wolves. As has happened often at this parity-laden tournament, ASU made a comeback in Game 4 to make it 3-1.

Game 5 started in disaster as Vandy’s “Big Three” of Hamilton, Earnest and Hesley all opened after leaving difficult splits. A second half comeback ensued and it got to nail biting time when an ASU open in the 8th gave Vandy life. Game 5 wasn’t decided until the Arkansas State anchor doubled in the 10th for a 199-193 win and pulled to 3-2 in the best-of-seven.

In the sixth and final game, Vanderbilt nursed a tiny lead into the 8th when the southpaw Goodman left a 3-6-7 split and things appeared dark for the Black and Gold. Not to worry, the freshman calmly threw a perfect spare ball and the covered frame proved huge. As it was, the game was not decided until Hesley struck with the first ball in the tenth.

The victory puts Vanderbilt into the semifinals for the second consecutive year and the fourth time in the program’s eight year history. The Commodores will face unbeaten Fairleigh Dickinson in the semifinals and will need to defeat the Knights twice to advance to the title game Saturday night.

WICKLIFFE, Ohio — Vanderbilt finds itself in the same position it was in a year ago after running into an Maryland Eastern Shore team that found a great time to bowl its best. The Hawks blitzed Vandy, 4.5-1.5, and in the process didn’t have a single game less than 221. In each of the six games, UMES managed to string at least five strikes in a row, sometimes more. And in bowling you can’t play defense.

Vanderbilt seemed to be in cautious control of the first game until a combination of a costly open frame coupled with a Hawk closing run of six straight strikes left things in a dead heat. Samantha Hesley saved the draw by striking out, matching the UMES anchor ball for ball.

From that point on it seemed all Hawks, who just yesterday lost in the team game to Vanderbilt by 77 pins and had barely escaped in their first game today, winning 4-3 over Sacred Heart.

Vanderbilt slips into the loser’s bracket and faces Arkansas State in a loser-goes-home contest. The match is scheduled to start at 2:40 p.m. CT.

A year ago Vanderbilt went on from this point to win its way into the national championship game.

WICKLIFFE, Ohio — Top-seeded Vanderbilt brushed back a feisty Valparaiso team, 4 games to 1, in the best of seven Baker and advanced into the second round winner’s bracket at the NCAA Bowling Championship Friday morning.

Vanderbilt went with a lineup of Brittni Hamilton, Sarah O’Brien, Natalie Goodman, Jessica Earnest and Samantha Hesley to begin but the first key turn of the contest came in Game 3 with a tight score and each team having won a game.

Coach John Williamson once again inserted right-handed freshman Nicole Mosesso into the lineup to attempt a difficult 1-3-6-7 split conversion, a tough shot for the left-handed Goodman. Mosesso came through big and it helped spur the Commodores to a narrow 176-171 win.

Vandy won Game 4 by a wide margin to take a commanding lead and put it away in five games.