Black and Gold and Equally Red

NASHVILLE, Tenn. — Equality was not a foreign concept to Sydney Campbell during her youth.

She grew up with a white father and a black mother who taught her and her brother that the color of one’s skin doesn’t define a human being. Campbell was also made to understand her parents’ union in the early 1990s evoked some backlash – even from some immediate family members.

As a budding tennis star in Franklin, Tennessee, Campbell was also not immune to prejudice and bigotry in her own life despite being a state champion at Christ Presbyterian Academy, then an NCAA semifinalist, SEC Tournament MVP and three-time All-American for Vanderbilt.

“My brother and I have faced discrimination for sure. Just people saying ignorant comments or even the jokes that they think are jokes – but they’re really not. It’s really just rude and unnecessary. People just saying downright mean things,” Campbell said. “The hard thing about being bi-racial is being told you’re not enough. You’re not white enough or you’re not black enough or you’re too white or you’re too black. Can I not just be me? Can I not just be myself? It doesn’t matter how I look like based off my skin color.

“We haven’t dealt with some of the more serious police brutality things – we’ve been really blessed that we haven’t. But those happen. And it’s a scary thing – but I think we all feel there’s a lot of hope and there’s a lot of change coming from the current situation in our country.”

So because of the ongoing social unrest and protests aimed at shedding light on injustice, Campbell and her family decided to step up and make a difference. Introducing Equally Red.

“We were just talking as a family and saying, ‘It really should be this simple right? It shouldn’t be this complex issue of who is superior and who is inferior over something no one has any control over? Beneath our skin we all bleed red.’ That’s kind of where it was born from,” Campbell said. “It’s a conversation-starter. You go out and someone asks you what that means and what that stands for and you can share with them our mission of proving equality.”

Said Vanderbilt women’s tennis head coach Geoff Macdonald: “I’ve known Sydney since she was six years old and have watched her grow up. I also had the privilege to be her college tennis coach. She played No. 1 singles on our national championship team, was an All-American and developed into an inspiring team leader so Sydney stepping up and advocating for equality and inclusion doesn’t surprise me – but makes me even prouder of the remarkable young woman she’s become.”

Equally Red’s mission is stated on its website: Promoting diversity, equality for all, eliminating racism and love without limits. And Campbell’s company isn’t just out to sell a few shirts.

They provide resources on the site for learning more about the fight against racism as well as a blog that asks individuals to share their own personal stories of how they have come to view race relations. Brienne Minor, a former University of Michigan tennis star – who, oddly enough, ended Campbell’s college playing career by defeating the Vanderbilt star in the 2017 NCAA Tournament – is the first author on the Equally Red site.

“It’s just her sharing her experience and her stories and giving advice on how you can love better, how you can be an ally for people, how you can help create equality,” Campbell said. “We’re going to do that for all sorts of different kind of people who may look different, but at the end of the day we’re all equal. That’s kind of the vision behind it.” 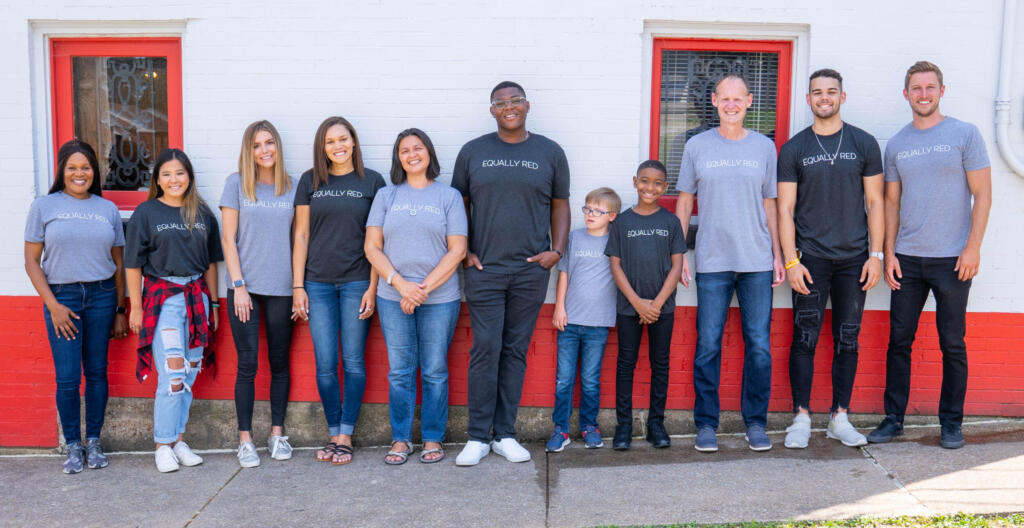 In its infancy as a company, Campbell, who graduated from Vanderbilt in 2017 with a degree in medicine, heath and society, said Equally Red would like to evolve into a community difference-maker that holds events to bring together people from all walks of life. Until they can work to that level, however, they’re starting with the simple concept that underneath everyone’s skin is the color red.

It’s a concept Campbell’s parents founded the family with and continues to practice and preach to this day.

“They have really set an example for us that they weren’t doing anything wrong – they loved each other and it didn’t matter that they had different skin colors,” Campbell said. “At the end of the day what they were doing was perfectly fine. It was great and it was a product of Martin Luther King Jr.’s dream.”