Back Where He Was Built

That’s the word that came to the forefront of Clark Lea’s mind when he was asked about one of – if not the – most memorable moments from a long Sunday on West End.

“It’s hopefully the first moment of many to come where you have to step back and say, ‘This is amazing.’ I’m just so humbled by it all,” Lea said.

Along with his wife Allison, eldest son Clark III (or “C3” as dad calls him), daughter Mara and “Baby” Jack, Lea walked through the tunnel of Vanderbilt Stadium and onto Dudley Field at about 9:30 a.m. Sunday. It’s a walk he made dozens of times as a fullback for the Vanderbilt football team at the turn of the century. 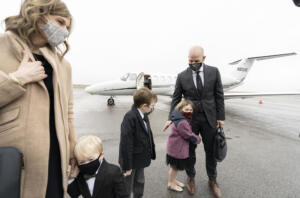 Less than 24 hours earlier, Lea was coaching in the Atlantic Coast Conference championship game as Notre Dame’s defensive coordinator. The Fighting Irish lost 34-10 to Clemson on Saturday and then the team boarded a flight from Charlotte, North Carolina, back to South Bend, Indiana.

Lea departed the airport and took photos at Vanderbilt Stadium while his children raced the length of the field multiple times and wrestled for possession of a football while braving the chilly and damp elements. A news conference to allow Lea to introduce himself as the new Vanderbilt head coach was scheduled to begin at 10 a.m. sharp. Lea even had a few shorts moments to collect himself and compose his thoughts before fielding questions from the media. 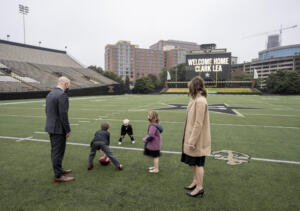 Of course, due to the COVID-19 pandemic, this was no ordinary news conference. Opening remarks from Vanderbilt Chancellor Daniel Diermeier and Lee were done virtually from separate locations. Lea gave his opening statement and then fielded questions via video conferencing.

He sat in the postgame media space outside the Commodores’ team locker room by himself, save for a pair of Vanderbilt staffers and a camera man. None of that stopped Lea from soaking it all in.

“When else in my life am I going to experience this?” he said. “It’s incredible.”

For the next 45 minutes Lea touched on a little bit of everything – his long- and short-term goals for the program, how he arrived at where he is today and how his experiences as a student-athlete on West End shaped his career as a professional.

He also, without hesitation, made note of just a few of those who have molded him along his path back to Vanderbilt: Ricky Bowers, Brian Shoop, Dave Jarvis, Bobby Johnson, Karl Dorrell, John Stiegelmeier, Rick Neuheisel, Dave Clawson, Scott Shafer, Brian Kelly, Don Meyer and Tim Corbin. 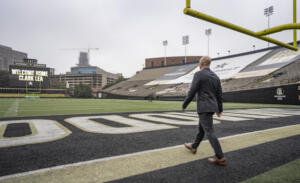 While Lea’s family took off on a tour of campus, the new coach of the Black and Gold was needed for more promotional and video shoots during the 11 a.m. hour. The 39-year-old was handed a No. 29 jersey during the session to represent the number he wore during his playing days, and his place as the program’s 29th head coach. He chose to hold the Vandy gold helmet as cameras flashed off the anchor pin on his tie and Star V pin on his left lapel.

“My career has been the product of my education. I was built here,” Lea said in between shots. “In so many ways I’ve carried this star with me and the anchor with me along my journey.

“When I was interviewing with Chancellor Diermeier and seeing the Star V on his shirt as we were talking, it hit home. It’s everything that I want to represent. To be able to circle back and wear it again is quite special. I’m just honored to be a part of it.”

Lea had about half an hour to catch his breath before a small luncheon was held where he and his family were able to meet and greet some of their new Commodore friends – like Mr. C, Vanderbilt lacrosse coach Beth Hewitt, Vanderbilt swimming coach Jeremy Organ, Vanderbilt cross country and track and field coach Steve Kieth and Vanderbilt deputy athletic director Kristine Kelly.

Lea’s father, Clark Lea Sr., and Lea’s mother, Pam, arrived on campus about this time. The elder Lea, a Memphis native, came to Vanderbilt as a student himself in the late 60s.

He recalled how his first class as a freshman was at 8 a.m. on a Monday morning. The professor had the students read an essay, an essay Lea Sr. thought was a standard exercise. Then a classmate raised his hand and gave the “most eloquent and thoughtful” assessment of the essay, whereby stunning Lea Sr.

That classmate was Perry Wallace.

So, in a way, Lea Jr. was connected to Vanderbilt history long before fate led him to West End via Montgomery Bell Academy by way of the Birmingham-Southern College baseball team through the Belmont baseball team over to Bobby Johnson’s football team to a winding road in the coaching profession to the present day. 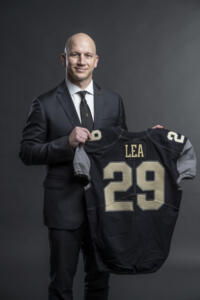 He spoke of that journey to more members of the media from 12:30 to 1:30 p.m. Lea explained how he hopes to live close to campus to make his own house accessible to student-athletes, how he wants to connect the growing Nashville community and the student body to his football program, about his part in Notre Dame’s current run to the College Football Playoff and how his time at UCLA as a young assistant coach was so formative about what success looks like.

Lea had mentioned earlier in the day that being in the current spotlight can be uncomfortable at times, but having so much support allowed him to embrace the pomp and circumstance of Sunday.

He had plenty of time on the flight north to dream about what the future holds.