A long year tested Auston Kim, but hope remains her best tool as a golfer and aspiring public servant.

NASHVILLE, Tenn. — Standing in the fairway on the 10th hole of the most famous golf course in the world, Auston Kim sized up her next shot in this year’s Augusta National Women’s Amateur. A long par-4 that descends steeply from tee to green, the hole historically ranks among the most difficult on the course—par harder to come by than even on the subsequent holes that form Amen Corner.

Yet for a fleeting moment, Kim didn’t worry about the next shot. Or next hole. Or next round. A golfer who grew up watching the Masters with her dad, entranced by the tournament but also curious why it was only for men, she stood on the fairway and savored her surroundings. Not a blade of grass looked out of place. And she was there. Not as a guest, but as a competitor.

“I think back to that very often,” Kim recalled. “Everything that I’d done the past few years led up to that. It was really nice. It was very peaceful.”

For Kim, the moment was also a port in the storm. She was an immediate success as a collegian, earning All-America and All-SEC accolades as a freshman and similar plaudits as a sophomore. She earned opportunities to compete in the 2020 Augusta Women’s Amateur and that year’s U.S. Women’s Open, events that presumably presaged a dominant junior year for Vanderbilt.

Then the world turned upside down. The Augusta tournament was canceled early in the pandemic, her invitation put on hold for a year. The 75th U.S. Open was postponed until December. After opting out of Vanderbilt’s fall season to remain home in Florida, she overhauled her swing. Upon returning to Nashville for the second semester and spring season, little went right. Her results suffered. Her confidence wavered. Her frustration mounted.

All the turmoil still surrounded that fleeting moment of serenity in Augusta. The reprieve was temporary. Yet it was also revelatory. Pursuing excellence doesn’t prevent failure or frustration. The pursuit invites such setbacks. It is all right to struggle. It isn’t weakness.

Standing amid the famed azaleas this spring, Kim wasn’t the golfer she wanted to be. She wouldn’t find that form again for months. Perhaps that was all right. After two meteoric years put her on the map, the lessons of her longest year may prove even more valuable.

“I’m grateful for those experiences because they helped me appreciate the good moments in life,” Kim said. “And how grateful I can be to represent Vanderbilt in the classroom and on the course.” 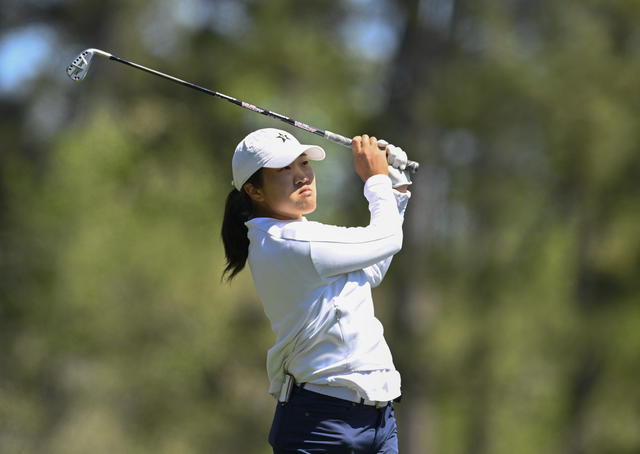 Golf was always going to shape Kim. With a dad, Christopher, who was an avid amateur player and an older sister, August, who played collegiately at Purdue and now competes professionally, the game was inescapable. She would either embrace it or reject it. There was no neutral option. Sure enough, by 5 years old, she was following her dad to the range or her sister to the course. It didn’t take long for golf to go from a hobby to something more serious.

“She wanted to beat her older sister,” Christopher Kim said of the siblings separated by five years. “Her competitive spirit kicked in.”

She was a very good junior player, better than she lets on when she says she was “OK” in high school. But she wasn’t a prodigy. As her dad notes, people just blossom at different ages. For Kim, golf before Vanderbilt was an occasionally frustrating endeavor. She worked hard. She cared. But it didn’t always translate to results commensurate with the effort. Not until she got to Vanderbilt.

"If we want change, it’s up to people my age to act and get the things we want in terms of positive change and positive evolution."

Whatever uncertainty Kim had about her own ability in high school, longtime Vanderbilt women’s golf coach Greg Allen had no doubts about her potential once she arrived in Nashville. A powerful player that Allen sometimes struggles to keep up with when serving as a weight training partner, Kim can reach the green in two shots on most par-5 holes in college competitions. That ability alone brings three or four birdie opportunities into play each round.

“The sound of the ball leaving that club face was just different,” Allen said. “She just hits the ball super hard. We knew she was going to be doing some special things for us.”

As a freshman, Kim either held outright or shared the team’s best score in six of her final eight tournaments. That included medalist honors in the Cougar Classic and NCAA Auburn Regional—the first Commodore to earn multiple medalist honors in a season since Simin Feng in 2014. Kim then led the team in scoring average during a sophomore season cut short by the pandemic.

The early success fueled Kim’s aspirations to follow in her sister’s footsteps as a professional golfer after graduation. To that end, her dad said, remaking her swing from a draw to a fade had long been on the agenda. A fade, he noted, matched the preference of most professionals and offered greater reliability. Still, overhauling a swing is also a significant commitment, which is why it was something they talked about doing only after Kim finished at Vanderbilt. But with the unexpected break as a result of the pandemic, they moved up the timetable.

The change was always something that weighed potential long-term benefits against short-term discomfort. It wasn’t going to be easy. And between adapting to the new swing and limited opportunity to play competitive rounds through much of 2020, Kim struggled on the course after returning to Vanderbilt ahead of the second semester.

“Golf is a mental game,” Allen said. “And when you’re going through major golf swing changes, you can get a lot of swing thoughts going through your mind.”

Even that moment of serenity at Augusta slipped away. She played well in the early rounds, which were played on a different course, but struggled in the final round on the famed course. It was more of the same in the college season, a step forward in one round and a step back in another. For someone who thrives on incremental improvement and seeing work translate to results, trusting a process again tested her relationship with the sport.

“Things got very difficult with golf because it was something that I really loved and something I enjoyed doing every day—and it just turned into something kind of ugly for me for a little bit,” Kim said. “That was disheartening to experience.”

She found solace through reading accounts of professional golfers who struggled with various aspects of sport’s mental demands. From swing changes to putting yips to more general self-doubt, even the best in the world struggle mentally in what is a largely solitary sport.

She kept playing, kept working. By August, when she succeeded in the first phase of the qualification process to compete next year on the LPGA or Symetra Tour, she felt like she could see light ahead. She felt good about how she played, good about how she handled the heat and difficult conditions in the California desert.

She continues playing well for Vanderbilt this fall, finishing tied for fourth in the Cougar Classic and tied for third in the Mason Rudolph Championship, in each case out of more than 80 participants.

“If an athlete has confidence, you’re halfway home,” Christopher Kim said. “Junior year, she lost a lot of confidence. Now she’s slowly gaining confidence. She believes in herself more.” 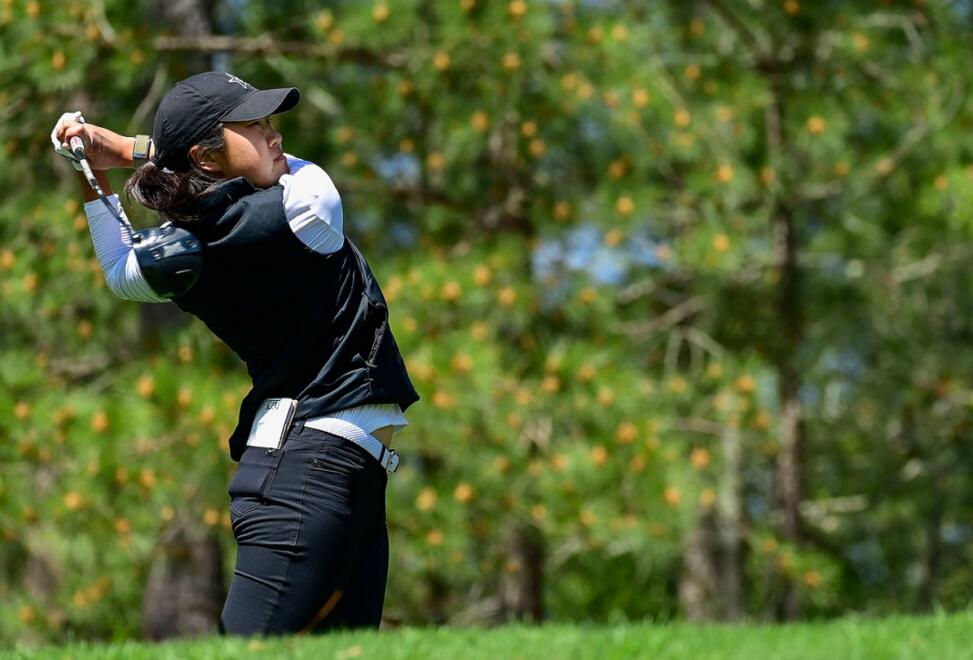 Outlasting disillusion should serve Kim well this season with the Commodores and into her future in the sport. That experience may prove useful well beyond a golf career, too. It is perhaps notable that someone who searched at such length for optimism on the golf course is a political science major whose faith in our collective potential remains undimmed by world events.

Kim arrived at Vanderbilt intending to follow in her sister’s footsteps off the course as well as on by going to medical school—at least until her freshman general chemistry class. Two weeks in, she realized she needed a new plan, her own plan, and she discovered she didn’t loathe history and government classes the way she loathed chemistry. In fact, she loved them.

An SEC Academic Honor Roll member as a sophomore and dean’s list honoree this past spring, Kim hopes to attend law school and work in politics when her golf career eventually ends.

Although the show almost predates her, she loves a quote from The West Wing’s fictional president Jed Bartlet that “decisions are made by those who show up.”

“I’m a realist,” Kim acknowledged. “If we want change, it’s up to people my age to act and get the things we want in terms of positive change and positive evolution. I’m a big believer in being able to achieve what we want—as long as we put our best effort forward.”

It’s the believing that can be difficult. Kim knows that well after a long year. Sometimes you can’t see the results. But sometimes you look around and see Augusta National. And you realize how far you’ve already come.

“Despite the hard tournaments, the long nights, the less than favorable outcomes, I really tried to turn myself around and focus on growth and improvement and things I could do better,” Kim said. “I focused on gratitude and really appreciating what I have in life. Remembering how hard that semester was for me, that’s the thing I’m really proud of.”

When Vanderbilt women's golf coach Greg Allen steps outside his team's golf house at the Vanderbilt Legends Club, he can usually hear the familiar symphony of his Commodores on the driving range.