A Moment for the Ages on the Mountain

FORT COLLINS, Colo. — Saturday night looked like it may unfold the way too many other Saturday nights have for Vanderbilt Football during its long and dark losing streak.

The Commodores were down 14-0 in the early stages of the second quarter. The crowd of 27,233, decked out in orange to celebrate the program’s annual Ag Day, had settled into its seats at Canvas Stadium and smelled blood in the water.

Then Colorado State, leading 14-0, missed a field goal. And missed another. And the door was cracked open.

And the Commodores stuck a foot in and pried that door open.

“That sideline and the belief on that sideline was the difference tonight. That has to do with Vanderbilt football discovering itself,” Vanderbilt head coach Clark Lea said after his first victory at the helm of the Commodores. “I give credit to our players who are learning how to compete with a dominant mindset for four quarters and to compete with a belief, too.

“That tone was set early on our sideline and it was sustained throughout. I think we learned a lot about what it means to put all our effort into a result this evening. So I’m very proud of the guys for that.”

Vanderbilt (1-1) scored 21 unanswered points in the second half Saturday. It looked like a completely different team than from a week prior in which it allowed 23 straight points in a 23-3 loss to East Tennessee State.

But on this night, in the cool Rocky Mountain air, the Commodores decided to take a turn. A turn for themselves and a turn for the program.

“We took an effort in our first game that we weren’t proud of and we shifted into one where we took the fight to Colorado State for four quarters,” Lea said. “Some of that was counterpunching, some of that was handling adversity. Adversity in Week 1 just stole our spirit. This week it seemed like it ignited our spirit. That’s an important moment.”

Vanderbilt had lost 11 games in a row dating to 2019, tied for the second longest such streak in program history. It hadn’t won a road game since 2018 – a stretch of 10 straight defeats. It hadn’t beat an FBS foe in 13 tries.

Colorado State looked intent on elongating those macabre streaks. It led 14-0 midway through the second quarter when Cayden Camper lined up for a 46-yard field goal.

“I think the game was just moving a little fast for us the first couple drives. When we forced the field goal that missed that was a big moment for us,” Lea said. “That was really the first time we counterpunched as a program. That was special. That was a moment that interjected some spirit into that sideline, too.” 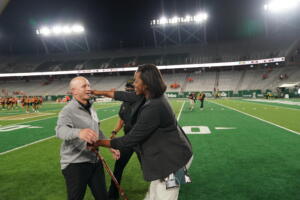 Vanderbilt now had a little bit of life.

A few minutes later in the quarter Vandy senior Allan George busted through the left side of the Colorado State punt protection and got a hand on Ryan Stonehouse’s punt resulting in a wobbly kick that fell to the Vanderbilt 42. Five plays later the Commodores had made it to the 20 and that’s where Ken Seals found Chris Pierce for a touchdown.

Vanderbilt was down just 14-7 at halftime.

“We could have just mailed it in, went into the locker for halftime, came back out and had no energy, but we were able to drive it down the field and score right before half and I think that was the turning point,” Seals said. “(Momentum) really started to take over in our favor.”

While Vanderbilt’s offense began to find its footing, its defensive counterparts came alive, too. After the Rams went up 14-0, their next nine offensive drives went scoreless.

A major turning point came when junior Jaylen Mahoney jumped a route and made a diving interception less than two minutes into the second half. That play led to a nine-play, 53-yard drive that ended with Seals finding Cam Johnson on a 9-yard touchdown pass to tie the game.

Four minutes later Seals added another score, this one on a 1-yard plunge over left guard, to give Vanderbilt the lead.

Colorado State didn’t go down quietly. A 3-yard touchdown pass with 3:07 to play tied the score at 21-all. There was plenty of time on the clock for Seals to command one last drive that resulted in Joseph Bulovas’ 38-yard field goal with 19 seconds to play providing the 24-21 winning margin.

The kick is good!

Dores are back on top with 19 seconds left on the clock.#AnchorDown pic.twitter.com/L1ju2paClD

“The guys in the locker room, they sure deserve it. They work their tails off day-in and day-out,” Bulovas said. “This game is not about a game-winning kick or anything like that, it’s about hard work throughout 60 minutes of the game. They wrote the letter and I just sealed the envelope.”

Vanderbilt’s next mission will be to do something it hasn’t done since 2018 – win two games in a row. It hosts Stanford (1-1) at 7 p.m. Saturday at Vanderbilt Stadium, another highly challenging test.

Concern for the Cardinal, however, can wait another day. Because the Commodores finally get to relish the feeling of being atop the mountain.