A Date With Dayton

NASHVILLE, Tenn. — The next road block on Vanderbilt’s postseason journey comes in the form of a 24-win Dayton team.

The Flyers (24-10) come to town this weekend looking to end Vandy’s National Invitational Tournament run when they meet the Commodores at 2 p.m. Sunday in Memorial Gymnasium.

“They run their stuff hard, they play hard. I think it’s just an identity of their coach, a guy that’s been around for a long time, a guy that I have a lot of respect for,” Vanderbilt head coach Jerry Stackhouse said. “We know that they’re going to play hard. I feel like we have a little bit more of an experienced team so maybe that can tilt the scales a little bit for us.

“But they’re definitely disciplined and they’ve grown a lot this year from earlier in the year to where they are right now and they’ve been able to win games while doing so. We definitely have to respect who they are, come out focused and hopefully get off to a better start than we did in the first round game (against Belmont) and just be focused on our attention to details on both ends.”

Vandy (18-16) beat Belmont by 11 on Tuesday to clinch a winning record for the first time since 2016-17 and to earn its first postseason victory since 2015. The Commodores have also now doubled their win total from one season ago.

The latter victory occurred Wednesday in an NIT first-round matchup where Dayton got 20 points from freshman forward DaRon Holmes and a double-double from freshman guard Koby Brea.

“(Holmes is) athletic. He’s long. He’s not as burly as some of the guys that we see,” Stackhouse said. “Hopefully we’ll be able to wear him down a little bit. But he’s definitely good.”

That type of production will be needed once again against a Dayton team which ranks 14th nationally in scoring defense.

“We’ve got to be ready to set screens, be physical on both ends and rebound the basketball, some of the same things that we’ve talked about all year,” Stackhouse said. “Finishing off our defense with defensive rebounds and crashing the boards ourselves to give ourselves second-chance opportunities in case we’re not shooting it well on our first try.”

The winner of Sunday’s contest advances to face either Florida (20-13) or Xavier (19-13) on Tuesday or Wednesday at a time and location to be determined. The Gators and Musketeers are scheduled to meet at noon Sunday.

Vanderbilt point guard Rodney Chatman graduated from Dayton in 2021 and transferred to Vanderbilt in the fall for his final year of eligibility. 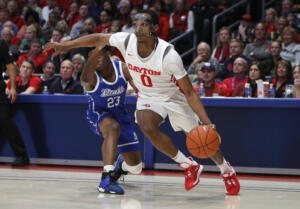 “It’s something I definitely didn’t expect. It’s just a full-circle moment,” Chatman said. “(Head) coach (Anthony) Grant is a great coach, I still love him to this day. It’ll be a fun game. I do kind of wish it was at UD Arena so we could go there – it would have been special. But we got a home game and that’s much better for our team.”

With the Flyers, Chatman played in 43 games, scored 334 points and racked up 144 assists. He had 21 points in a 2020 game against Ole Miss and nine assists in a 2019 contest against North Florida.

Chatman said he still keeps in touch with most of the student-athletes on the Dayton roster and much of the assistant coaches and staff members inside the Dayton program.