A 'bright' future at Vanderbilt

On campus in Nashville – When the sun shines on the rooftop at Vanderbilt’s Brownlee O. Currey Jr. Tennis Center, it means a little more to Marie Casares.

Casares, a former member of the Commodores’ women’s tennis program (2011-15), played a role in pushing Vanderbilt athletics to the forefront of sustainable energy on campus. Two years ago, she proposed the installation of solar panels atop the Currey Tennis Center, where she once starred as a Commodore student-athlete. The panels have greatly reduced the building’s energy consumption, and they could be the precursor to a renewable energy movement across Vanderbilt’s campus.

For Casares, the sun-soaked panels atop the Currey Center represent her energy-friendly way of giving back. Now she hopes the project will serve as a catalyst for a sea of change at Vanderbilt, and beyond. “There are so many resources we could use to make energy clean and make everything renewable,” Casares said. “That’s a change we should start making.”

The project began in the fall of 2014 with the help of Vanderbilt’s Green Fund program. The Green Fund is money set aside by VU Facilities and Dean of Students office to address student-initiated energy conservation projects. Students propose projects with environmental and economic benefits to a student-led committee that works closely with Vanderbilt’s Sustainability and Environmental Management Office (SEMO) and the Campus Energy Manager. The group determines which projects receive funding and then manages their subsequent installation. Engineering students like Casares are particularly encouraged to craft proposals.

In cultivating an idea, Casares needn’t look far for inspiration. Her father, Esteban, is an electric engineer in the family’s native Ecuador, and he runs a 4,320-panel solar plant in Marie’s hometown of Quito. In a sense, solar energy runs in Casares’ family. That was music to the ears of Geoff Macdonald, the longtime Vanderbilt tennis coach and a proponent of solar technology. So Macdonald and Casares put their heads together and came up with a way to impact the Commodores’ tennis facility.

By the fall of 2014, Casares had already become a decorated student-athlete at Vanderbilt. As a junior during the 2013-14 season, she set school records in single match wins (32) and combined wins (60). Casares would go on to deliver the point that clinched Vanderbilt’s most recent SEC championship in April 2015. That year she helped carry the Commodores to the program’s first NCAA title, after which Casares earned All-Tournament honors. Her love for tennis dated back to childhood, and it made it easier for her to pinpoint a Green Fund proposal. “I had to provide an idea of where the project would be and what it would do,” Casares said. “So since it’s something close to my heart, I proposed the tennis center.”

A determined Casares wrote and submitted a two-page proposal for the Green Fund in Dec. 2014. She called for the installation of solar panels that could both generate electricity and help heat the building’s water. Casares estimated that the project would pay for itself in five-to-seven years. “Marie did a phenomenal proposal,” Macdonald said. “It was scientific, it was researched, it described how much money it would save. It was just amazing.”

The solar project would be the first of its kind at Vanderbilt, and Casares noted the importance of its promotion at an athletic facility. That angle could help garner publicity and spark a bigger conversation about renewable energy on campus. “Even if a small project like this one, one of the smallest of the proposed projects, gets built, it can spark a fire of good, sustainable and renewable energy alternatives here at Vanderbilt,” Casares wrote. 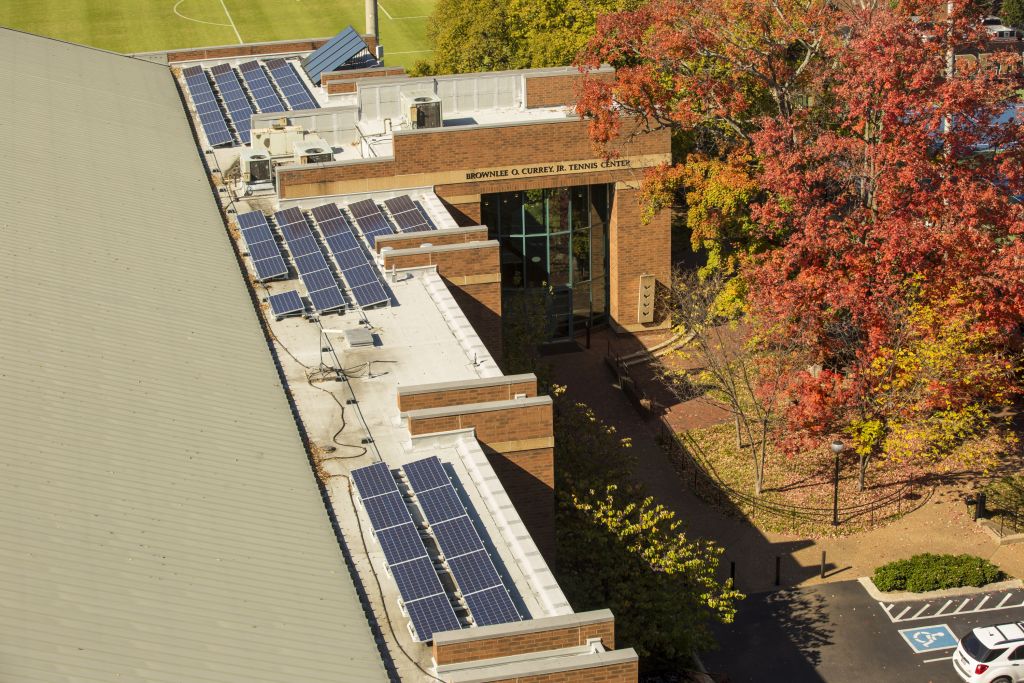 It wasn’t long before Casares received good news: the Green Fund Working Group, comprised of six administrators, six students and a faculty member, approved the approximately $80,000 funding needed for the project. Crews installed the first panels on the Currey Center roof in the fall of 2015 and the second set this fall. In all, 67 Solar Laminate PVL panels and four SunMaxx Thermopower panels were placed on the roof. According to Macdonald, the panels are built to last 25 years, and the early returns suggest a wise investment: in its first three months, the system cut natural gas consumption at the Currey Center by 40 percent.

Those benefits have shown just how impactful similar projects could be across campus. “Look at the McGugin Center,” Macdonald said. “Look at Memorial Gymnasium. There’s so much roof space here. It’d be wonderful if we could somehow get more solar energy at Vanderbilt.”

Campus energy experts agree. Michael P. Vandenbergh, the David Daniels Allen Distinguished Chair of Law at Vanderbilt Law School, is a leading scholar in environmental and energy law and the director of the university’s Climate Change Research Network. Vandenbergh said it’s important for people to witness the true power of solar energy, which is why the Currey Center project has the potential to spark change.

“People need to see evidence of progress in order to want to invest time and energy in other projects,” Vandenbergh said. “Solar power has come to represent a very forward-looking way of thinking about the future. It’s something that’s very attractive to potential applicants at Vanderbilt, and even faculty and staff. It gives us a chance to envision a kind of campus that we can be proud of.”

Now a civil engineer in her native Ecuador, Casares has already recognized the impact of the tennis center project back in the states. Last month, a sophomore in Vanderbilt’s engineering program emailed Casares to inquire about her experience with the Green Fund. That student, too, hopes to spearhead a similar project, one that could likewise illustrate the untapped potential of renewable energy at Vanderbilt.

That impact brings a sense of pride to Casares. Two years ago, a Vanderbilt tennis player simply wanted to make a difference. Soon, that difference might be felt all across campus.

“For me, it came from a place of caring — caring about the world, about Vanderbilt, about a certain place in the tennis center,” Casares said. “I think it’s very powerful. I can already see the change.”