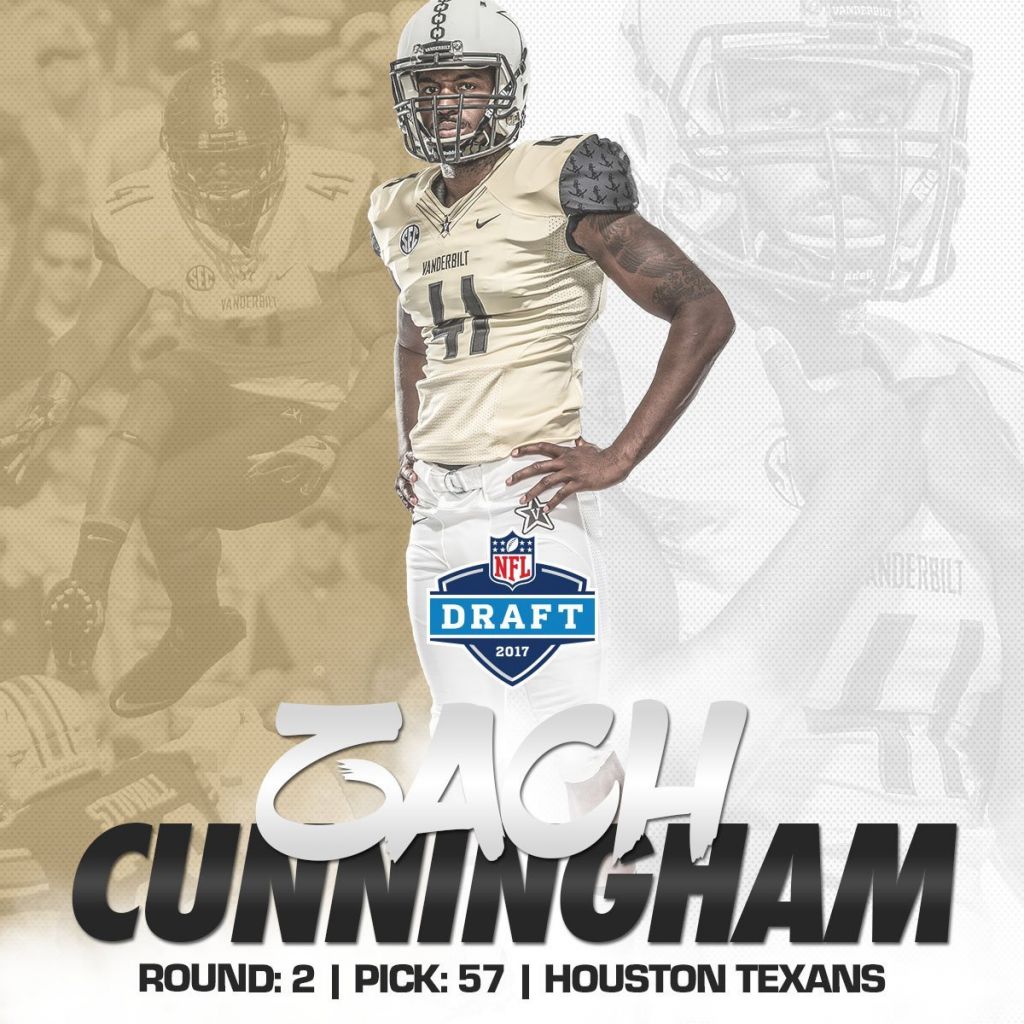 Vanderbilt linebacker Zach Cunningham became the program’s highest defensive draft pick in 16 years when he was selected in the second round of the 2017 NFL Draft by the Houston Texans on Friday.

The Texans selected Cunningham, a unanimous First Team All-America in 2016, with the 57th overall pick. It is the highest selection of a Commodore defensive standout since linebacker Jamie Winborn was taken 47th overall by the Arizona Cardinals in 1998.

“I was definitely excited and relieved at the same time. I was feeling nervous watching the picks go through,” Cunningham said. “I’m just taking it all in, but it was a huge surprise to me. It’s a blessing to me, this whole process has been a blessing. I’m at a loss for words, really.”

“I’m excited for Zach and his family, and I’m excited for our football program,” Vanderbilt Head Coach Derek Mason. “Zach is truly one of the best I’ve ever coached, and he enjoyed a remarkably productive career as a Commodore. But more than that, he’s been a great teammate to all the guys. I look forward to Zach having a tremendous career in the NFL.”

The 6-4, 230-pound Cunningham finished his college career as arguably the most decorated player in Vanderbilt history. Last season, the Pinson, Ala. native finished as the Southeastern Conference leader with 125 total tackles and four fumble recoveries, ranking second with 71 unassisted tackles and third with 16.5 tackles for loss. Cunningham’s unassisted stops and total tackles marked the most by a Commodore defender in a dozen years. Cunningham’s 16.5 tackles for loss tied for the third-highest total in a single season in modern Vanderbilt history.

In 2015 and 2016, Cunningham was a consensus First Team All-SEC linebacker. He became Vanderbilt’s first Butkus Award finalist in 2016.

Welcome to houston @ZCunningham_LB finally got another Vandy boy on the team!! #NFLDraft #AnchorDown

It’s been way to long @ZCunningham_LB for this pick. You will make every team that passed you up regret it. God Bless you and your journeyÃ¢Å¡â€œÃ¢Â¬â€¡