Standout Vanderbilt running back picked 76th overall in third round

NASHVILLE, Tenn. – The Tampa Bay Buccaneers selected Ke’Shawn Vaughn on Friday with the 76th overall pick of the NFL Draft. Vaughn was taken in the third round.

Vaughn becomes the 16th Vanderbilt player selected in the NFL draft in the last decade.

With Vaughn’s selection, at least one Commodore has been picked in the first three rounds of the last four NFL drafts.

Bucs Director of Player Personnel John Spytek on RB Ke’Shawn Vaughn: “He’s a good runner and a good receiver out of the backfield. He’s got the ability to detach and run some of the routes that Coach Arians likes to do.”

Vaughn becomes the highest Commodore running back draftee since Tom Moore was taken fifth overall in 1960. 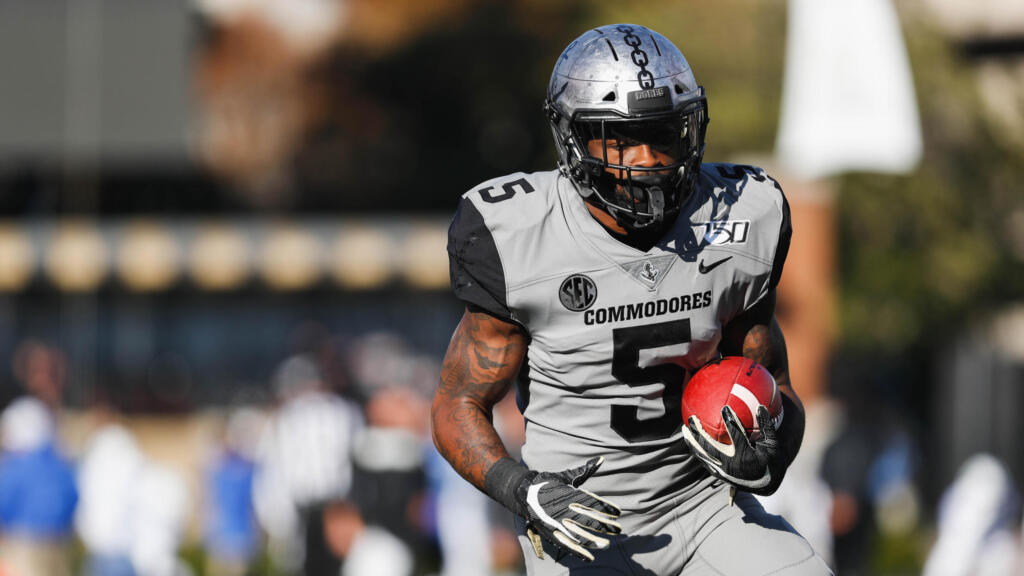 In just two years wearing the black and gold, Vaughn left his mark on West End by finishing his career among the leading running backs in team history. The Nashville native ranks fifth all-time on the Vanderbilt charts with 2,272 rushing yards despite making just 24 appearances.

Vaughn’s 6.4 yards per attempt is the highest among Vanderbilt’s top-10 career rushers. He also ranks third all-time among Commodores with 21 rushing touchdowns.

In 2019, Vaughn became just the third back in Vanderbilt history to register back-to-back seasons of at least 1,000 rushing yards. As a senior, he produced 1,028 yards and nine touchdowns on 198 carries.

Vaughn produced one of the finest years ever by a Vanderbilt back in 2018, earning second team All-SEC honors from The Associated Press. That year, the junior rushed for 1,244 yards – the team’s second highest single-season total ever.

Congratulations to 💫⁦@SneakVaughn⁩ …so excited
to see you in Tampa with the @Buccaneers ⚓️⬇️#Limitless #RTI pic.twitter.com/ZM0yLj8zhv

Vaughn’s 7.3 yards per rush that season established a team record for backs with at least 100 attempts. He also ran for 12 touchdowns, the fourth-highest season total by a Commodore back.

Vaughn surpassed 100 rushing yards in nine of 24 appearances as a Commodores. He owns two of the program’s highest single-game rushing totals – 243 yards against Baylor in the 2018 Texas Bowl and 182 yards at Missouri in 2018.

From our record books to yours … @Buccaneers get ready for @SneakVaughn.#NFLDraft | #AnchorDown pic.twitter.com/mtZ8ifEBad

Vaughn also ranked among the nation’s most explosive backs. During the 2018-19 seasons, he led the NCAA with seven rushes of 60+ yards, eight rushes of 50+ yards and 14 rushes of 40+ yards.

He also displayed receiving ability out of the backfield, leading all SEC backs during the 2019 regular season with 281 receiving yards.