“We got more comfortable as the tournament progressed,” Vanderbilt head coach John Williamson said. “And our team showed it has the ability to grind it out. It’s much easier to shoot 240 and blow people away but to make spare after spare is hard. Your swings tend to get tight – that was our problem Friday.

“I thought we bowled well all day, just a few mistakes cost us that first match”

The Commodores were tripped up in Sunday’s opening best-of-seven Baker match, losing 4-2 to top-seeded McKendree. However, they rebounded with a strong win against Southland Bowling League rival Sam Houston State 4-2 to set up the quick rematch with McKendree.

Vanderbilt’s Maria Bulanova was named the tournament’s Most Valuable Player, in part for her first place individual finish Saturday, and partly for her exceptional anchor performance in Sunday’s critical Baker games.

“Our girls have confidence in what they are doing and in each other,” Williamson said. “We can accomplish a lot with good chemistry.” 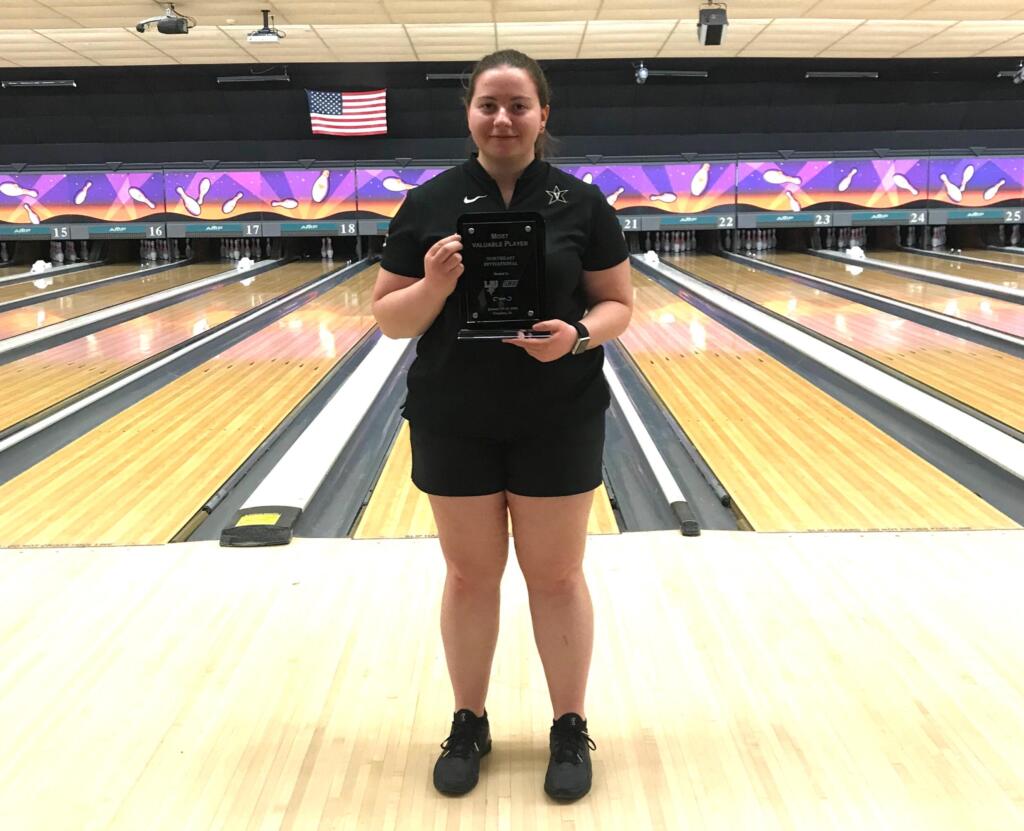 There was not the intense drama in this championship that often occurs when two of the nation’s best teams square off. With a rotation of Emily Rigney, Samantha Gainor, Adel Wahner, Mabel Cummins and Bulanova, the momentum swung Vandy’s way early as it came from behind to win the first game at the wire.

McKendree had started with a three-bagger and nursed a delicate, four-pin lead into the 10th. However, Bulanova struck out while Bearcat All-American Breanna Clemmer could manage just one strike and a spare allowing Vandy to eke out an exciting 206-200 win.

Vandy won the second game 199-191 in a nip-and-tuck affair aided by five strikes during a six frame interlude. Game 3 was a struggle for both teams – McKendree had four opens to Vandy’s three and VU prevailed 162-154.

Vanderbilt won the deciding game going away 215-170. Gainor had five strikes in eight frames, as did Cummins.

“Once again I thought (Gainor) competed well and I was impressed by Mabel’s toughness,” Williamson noted. “I think this was the first time this year we’ve taken her out of the rotation when she wasn’t performing well and some kids will get down or pout. (Cummins) sat out a bit, got her mind slowed down and came back like a champ.”

The semifinal win over Sam Houston began with a 191-190 loss, the kind of photo finish that might be discouraging. However, Vandy came roaring back. After starting open-spare, it ran off 10 straight strikes for a convincing 269 in the second Baker.

Sam Houston bounced back in Game 3, but Vandy won the fourth game after a minor tweak to its rotation 218-213, and closed it out with wins in the fifth and sixth. That tweak was Gainor and Cummins trading places, Gainor into the two-hole and Cummins moving to fourth.

One key to Vandy’s win over SHS was its ability to close frames – it had just two opens in 60 frames.

While the match situations didn’t allow for frequent substitutions, all eight Vanderbilt bowlers on the trip got into the fray. Bryanna Leyen and Amelia Kiefer were given the opportunity to get into the tournament history book late in a couple of games.

This was Vanderbilt’s 36th program title and it became the first champion of this new tournament, sponsored by Sacred Heart and LIU-Brooklyn.

With a late return flight, Williamson took the happy Commodores to view Philadelphia’s Liberty Bell, a historical icon many team members had never seen in person.

After winning championships on both sides of the country, Vanderbilt has a welcome week off before traveling to the Prairie View Invitational Jan. 31 in Arlington, Texas.