The Mystique and Aura of Memorial Gym 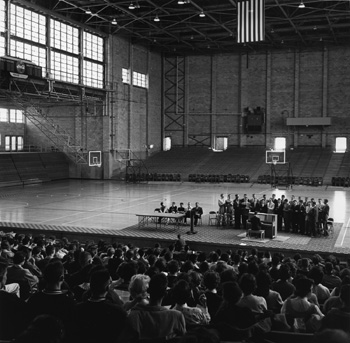 The temperature outside is falling, but inside the temperature is just beginning to heat up as the aroma of buttered popcorn begins to fill my corridors and the people who fill my seats and rock my balconies are back for another year of basketball.

It’s that time of year again Commodore fans. Time to open my doors to you and show you all I have to offer. I’m 57 years old, or should I say young now. My foundation settled long ago, but I’m far from retirement.

I’ve seen a lot in my time. I have been added on to on three occasions. My seating capacity has changed four times and is more than twice what it was at first. Through the changes, I’ve never lost my character, which is why some call me the Fenway Park of college basketball. My court is still elevated as if on a stage, the benches are on the baselines and instead of being in the shape of a bowl like most arenas, my arrangement resembles more of a box with four distinct sections.

When I was born in 1952, I was dedicated as a memorial to the 144 Vanderbilt men and women who lost their lives while serving in World War II — hence my full name, Memorial Gymnasium.

I still am a memorial for those who served in World War II, and as I grow older, the number of Vanderbilt World War II veterans I memorialize sadly grows larger with each passing year.

When architect Edwin Keeble designed me, he did so with his eye on me being a combination of a gymnasium and a concert hall. Well, he got what he was looking for and much more. Sure, I’m best known for the basketball games I host, but I’ve welcomed many guests inside for other events. I’ve hosted cheerleading competitions, band competitions, a professional wrestling event, a major boxing match, countless commencement ceremonies and numerous concerts. Did I mention that I used to have a swimming pool? You could say I’ve had a lot going on, so much so that I don’t even remember them all. You know, my memory isn’t as good as it once was.

Yeah, some of my colleagues marvel at my jack-of-all-trades ability. They may be younger and have more modern amenities like air conditioning or a high-definition video board, but they don’t have the aura or mystique I have.

I’m not being pompous. Listen to what people say about me.

“I thought (Memorial Gym) was great to coach,” Vanderbilt hall of fame coach Roy Skinner said. “I thought it was unbelievable, and the crowds were super. That was an ideal place to coach as far as I was concerned.”

“What sets (Memorial Gym) apart from other places is the uniqueness and the character,” Vanderbilt Head Coach Kevin Stallings said. “I just think the combination of it sort of being a one-of-a-kind place with a terrific atmosphere makes it a great venue for college basketball.”

“I have been to Memorial Gymnasium (many times, in fact), and I can tell you with a degree of certainty that it is one of the neatest arenas in college basketball,” said CBSSports.com college basketball writer Gary Parrish. “The design is pleasantly strange. And the levels seem to be stacked on top of each other to the point where it looks intimidating from the floor and sounds really loud from anywhere. Bottom line, I dig that place.”

I’ve hosted many events, but nothing compares to the atmosphere of a good basketball game on a cool winter night when I’m filled to capacity and the electricity of the crowd makes my infrastructure shake when it roars. I learned at a young age that even when I turned the lights down in the seats during play, it was virtually impossible for me to take a nap during a basketball game.

I’ve actually had a loss in hearing, and I’m not sure if it can be attributed to the roar of the crowd, my age, or a combination of both. There have been games when it sounded like a locomotive was steaming through the middle of the gym, and there have been times when the court shakes above the concrete slab it sits upon.

“I think that it is awesome for an athlete when they are able to feel the energy from the crowd,” Stallings said. “For most of them, the more fun it is to play, the easier it is for them to play.”

I’m not going to lie. I’m a little vain and have had some improvements made to myself. I had a new court installed before last season. I had my locker rooms upgraded to some of the best in the country. I’ve got a new team room, training room, coaches’ offices, a practice gym and a few cosmetic changes to name a few. I’ve also grown in size, thanks in part to “The Balconies Clyde Lee Built,” but I’m pretty much the same as I was in 1952 when I had a capacity of 6,583.

One thing that hasn’t changed is my hunger for being unique. I’ve always wanted to be different from my colleagues. Why not put the benches on the baseline? Why not make the first few rows below the playing court like a stage at an amphitheater? Why not make the sidelines so wide I could park a tractor-trailer on it or baseline so short someone in the first row could reach out and tap a player on the shoulder?

Sure, I’ve had my fair share of complaints about my setup, but I’m not going to change. After all, what do you want me to do? The benches can’t be put on the sideline or they would block the view of my guests. I could cut the width of the sidelines and I could put the benches below the court like they once were and currently are at my relatives–Williams Arena in Minnesota–but I like the way I am.

Fans of opposing teams will complain, saying my design is unfair to their team. Coaches and players will even harp on my design and blame me for being the reason for their loss. Former Georgia coach Dennis Felton never did like me.

“It is illegal,” he said after Vanderbilt’s win in 2008. “For some reason, they are the only program in the country that is allowed to have an illegal setup. That is certainly a part of (why Vanderbilt is successful at home) because they play 16-18 times a year in that setup, and everyone else only plays at most once, and you are away from everything for half the game.”

Having the benches on the baseline sure can be entertaining. I’ve seen teams come to shoot around and work on substituting into the game. Where else does that happen? I’ve seen players forget where the scorer’s table is. 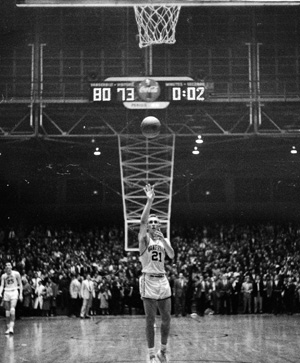 I’ve mainly hosted Vanderbilt basketball games, but I’ve hosted others as well. The Battle of the Boulevard was played here, as was the SEC Tournament and NCAA Tournament. The last women’s NCAA Tournament played here was in 2006, while the last men’s tournament game was in 1993.

After former Florida State coach Pat Kennedy lost a first-round NCAA Tournament game, he complained that my floor arrangement was unfair and it distracted his players.

The complaints will keep coming, but I’m not changing. Maybe I’ve gotten more stubborn with my age, but I like the way I am.

“I know others think it is a little bit awkward the first time they play in it with the benches not being on the sides,” sophomore Jeffrey Taylor said. “To me, it is a really cool setting how the gym is. The crowd gets really loud and it is just a great place to play.”

Talk about bang for your buck, it cost $1.5 million to construct me. How much did the new Dallas Cowboys Stadium cost … almost $2 billion? You could say I’ve been a pretty good investment.

The men’s team has never had a losing season here, and the women’s team has had just one. I’ll admit it doesn’t hurt that there have been some pretty good teams here at Vanderbilt, but I feel like I’ve played a little part in the team’s success.

People like to call it “Memorial Magic,” but I’ve never thought of myself as being much of a magician. I’m not even sure if I could do the simplest of card tricks, let alone be the reason for so many big wins. There is something special that takes place here, though.

The last four men’s basketball teams that have come in here with a No. 1 ranking have left with a loss. In 1987, it was North Carolina, which had a guard named King Rice, who is now an assistant at Vanderbilt. In 1993, it was Kentucky, who ended up advancing to the Final Four. In 2007, it was eventual national champion Florida and in 2008, it was intrastate rival Tennessee.

The so-called “Memorial Magic” is nothing new. In fact, Vanderbilt has hit so many game-winning shots here that I could write a book about them.

I’ve seen a lot in my time. I saw Perry Wallace break the color barrier in the SEC, Roy Skinner win two SEC titles, Clyde Lee dominate the boards, Shan Foster make three-pointers from another time zone and Barry Goheen make a habit out of last-second heroics. I’ve also seen at least one three-pointer made in every game by the Commodores since the inception of the three-point shot. I’ve seen some things happen that I can’t even explain.

Maybe there is a little magic in me.